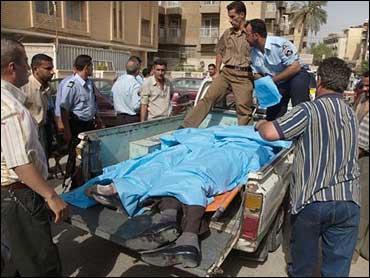 One of the Sunni Arabs appointed to a committee to draft Iraq's constitution was assassinated Tuesday in a drive-by shooting, an Iraqi official said.

Mijbil Issa was gunned down, along with two bodyguards, in the Karradah area of Baghdad, according to Mohammed Abed-Rabbou, a Sunni member of the drafting committee.

Issa was among 15 Sunnis named last month to a committee charged with drafting a new constitution by Aug. 15. The Sunnis were added in an attempt to reach out to the religious community that provides the heart of the insurgency.

However, two Sunni committee members had already quit because of threats from the insurgents who oppose the U.S.-backed, Shiite dominated government.

The attack occurred as the committee drafting the constitution was holding a meeting at Baghdad's Convention Center on the edge of the heavily fortified Green Zone, home to the U.S. Embassy and Iraqi government offices. The meeting was immediately adjourned when the head of the commission Humam Hammoudi got the news, Kurdish member Mahmoud Othman said.

In other violence, gunmen ambushed a bus carrying Iraqi workers to a U.S. air base near Baqouba, killing 13.

Assailants in two cars attacked the minibus on its way to al-Faris air base, said Police Col. Mahdi Saleh from Khalis. Baqouba is 35 miles northeast of Baghdad.

Another police official, who declined to give his name, said 10 workers were killed along with three civilians when the bus slammed into a nearby car.

Before Issa's slaying, President Jalal Talabani said good progress was being made on the constitution, although there are some "Arab brothers" who "have some reservations that are being taken into consideration."

"If we can reach an agreement with them, I believe the constitution can be ready by the end of the month," he said.

Talabani, a Kurd, did not identify the critics but he was clearly referring to Sunni Arabs who want a strong statement affirming Iraq's Arab identity and who oppose some definitions of federalism supported by the Kurds and some Shiite Muslims.

The Iraqi parliament has until Aug. 15 to adopt a draft constitution, which will be put to a nationwide referendum by mid-October. If approved, it will provide the basis for a new election in December.

Some Shiites oppose the interim charter's limitations on the role of Muslim law as the basis of the legal code. Some Sunnis oppose autonomy guarantees given to the Kurds as a threat to national unity.

"Concerning the constitution, we are in agreement with the national and Kurdish forces that the interim constitution be the basis for the Iraqi constitution," Allawi said.

"I believe that will allow Iraq to have the constitution. As soon as the referendum on it is finished, Iraq will have stability," he said.

Violence has steadily escalated in Iraq since Prime Minister Ibrahim al-Jaafari announced his Shiite-dominated government in April. Most of the insurgents are Sunni Arabs, who enjoyed considerable prestige in Iraq during the rule of Saddam Hussein.

On Tuesday, Iraqi National Assembly speaker Hajim al-Hasani expressed his concern regarding the spike in terrorist attacks but also cautioned that recent calls to form militias in cities could prove problematic.

Al-Hasani said the presence of militias on Iraqi streets would represent a big challenge to the government and its attempts to impose security. Such a move could "open the door for the interference of regional and international forces in Iraq's affairs," he warned.

Instead, he called upon the government to speed up the process of building up security and the Iraqi army.