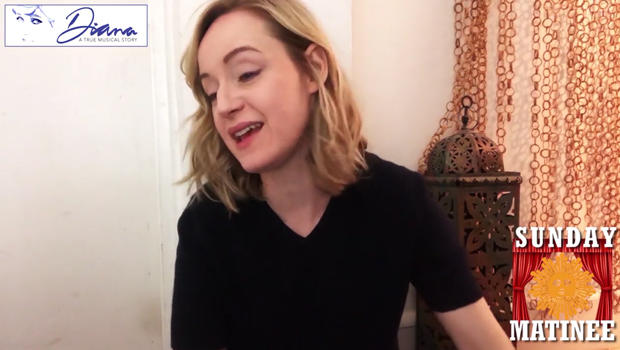 Among the Broadway shows that have been temporarily shut down owing to the COVID-19 pandemic is "Diana: A True Musical Story," about one of the most famous women in the world and how she endured the spotlight brought by paparazzi and her royal position.

The show, which traces the love triangle involving Princess Diana, Prince Charles and Camilla Parker Bowles, premiered at the La Jolla Playhouse in California last year, and was just starting previews in New York City when coronavirus brought down the curtain on an indeterminate intermission.

The cast features Jeanna de Waal ("Kinky Boots") as Diana, Roe Hartrampf ("Madam Secretary") as Charles, Erin Davie ("Sunday in the Park With George") as Camilla, and two-time Tony-winner Judy Kaye ("The Phantom of the Opera," "Nice Work If You Can Get It") as Queen Elizabeth II.

In this premiere recording created for "CBS Sunday Morning," Davie performs "I Miss You Most on Sundays," an Act I song her character sings to Prince Charles, but which here also serves a second purpose: pining for the community of fellow theatre artists now separated because of the lockdown.

The show's book and music come from the Tony Award-winning team of Joe DiPietro and David Bryan ("Memphis"). Christopher Ashley ("Memphis," "Come From Away") directs, with choreography by Olivier Award-winner and Tony-nominee Kelly Devine ("Come From Away," "Rocky").