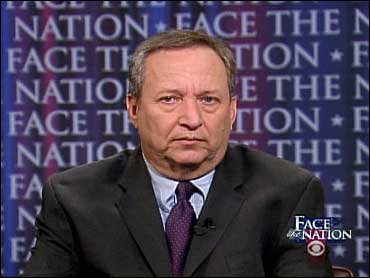 Reports came out this morning that AIG, which has received $170 billion from the U.S. government to prevent the firm from collapsing, has paid out $165 million in bonuses.

But Summers also said that "you can't govern out of anger" and that the government doesn't have the power to stop bonuses from being paid out under existing contracts.

"If we simply throw up our hands, refuse to deal with any of this, we'll have the kind of financial catastrophe that we saw after what happened at Lehman Brothers," Summers said. "[Treasury] Secretary Geithner has negotiated very forcefully with AIG. He has done everything that is legally permissible for the government to do to limit the payment of bonuses. But where there are contracts, binding contracts that were entered into long before the government put any money in to AIG -- we're not a country where contracts just get abrogated willy-nilly."

Summers added: "And if we were to start doing that, there would be potentially very destabilizing consequences."