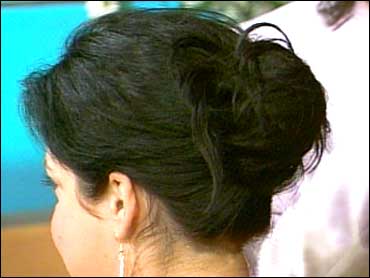 As the steamy summer weather seeps in, for many of us it means that bad hair days lay ahead.

Coming to the rescue this season are soft and sultry off-the-neck styles. As one of the hottest hair trends right now, casuals updos not only will keep you cooler, but looking sexier than ever, says celebrity hair stylist Oscar Blandi.

Blandi visited The Early Show to show some easy updos.

Blandi followed in his father's footsteps by becoming a hair stylist. He left his native Naples, Italy to train for a decade in several well-known salons in New York City before opening his own salon at the Plaza Hotel. Oscar has also become a mainstay on the red carpet, working with celebrities such as, Uma Thurman, Katie Holmes, Salma Hayek, Jennifer Connelly, Sarah Michelle Geller and others.

Whether it's the polished elegant updos we've recently seen all over the red carpet, or the more casual ones emerging as this summer's hottest hair trend, lifting your tresses can totally transform your look. The latest off-the-neck styles can also keep you cooler and looking sexier during those steamy summer months.

Blandi has a monthly column in Glamour Magazine called "Hair Help," in which he answers questions regarding hair concerns. Readers are asked to e-mail questions to him at OscarB@glamour.com.