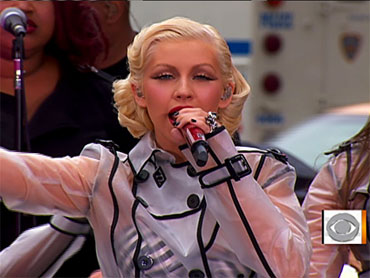 A slow economy and a glut of choices is turning the once ironclad summer tour season into something of a gamble.

The evidence is everywhere. The always bankable Eagles have canceled dates. Christina Aguilera shut down an entire tour before it got started. Rihanna just canceled her tour opener.

Add in what seems like a large number of injuries, illnesses and mysterious happenings that have led to sometimes legitimate cancelations. U2's tour was postponed due to Bono's back surgery and at least outwardly it looks like summer tours are starting to see the strain the rest of the music industry has been experiencing.

"It's just a sign of the times," Davis said. "We're in a bad place now financially, everybody, and I think people are cutting back. Hopefully when this goes away, whenever it does, then things will get better, but it doesn't surprise me that people don't have as much money to spend as they used to."

Kevin Lyman, the brains behind The Warped Tour, the Mayhem Festival and the new Country Throwdown Tour, acknowledges he was sweating it last week. The always bankable Warped Tour, a 16-year-old traveling punk festival, was struggling to sell tickets for a Ventura, Calif., show and he was looking at a big loss.

He sold 80 percent of his tickets in the last week and ended up with a great turnout, but the struggles he's had this summer; he canceled four Throwdown dates and is worrying about the bottom line more than he has since the late '90s; have him thinking about the mistakes that have been made by the touring industry as a whole.

"Two years ago we were talking about the heyday of touring," Lyman said. "A touring industry that's been around 60 years now, in two years we screwed it up."

Ozzy Osbourne believes the industry is tone deaf when it comes to the main problem, ticket prices. A premium seat with VIP privileges for a top act can go for more than $1,000. A mediocre seat at one of those shows might cost more than $400. Pollstar, the touring industry trade magazine and website, shows the average cost of a ticket in 2009 was $62.57, up from $25.81 in 1996.

Osbourne, one of rock 'n' roll's most bankable touring stars and the founder of Ozzfest, says "people are getting very greedy."

"You can't charge exorbitant ticket prices," he said. "It's crazy. You have to read the market."

That market has appeared strong, running in the opposite direction of the economy the last few years. Pollstar estimated a record $4.6 billion in worldwide tour grosses in 2009 with a record 40.5 million tickets sold. Both figures were significant increases over 2008. The top 10 tours of 2009 grossed about $771.6 million with U2 taking $123 million.

An analysis of first-quarter ticket sales in 2010 by Pollstar showed the trend is continuing with gross revenue and sales up from last year.

Looking at those numbers, Pollstar editor in chief Gary Bongiovanni sees this summer as nothing more than business as usual in an industry that's usually volatile.

Sure, ticket sales are down, but that's to be expected and nothing disastrous, as some industry watchers have claimed. He points out that there are several in-demand tours that are doing just fine.

Lady Gaga, Justin Bieber and James Taylor and Carole King aren't having problems selling tickets, perhaps muscling in on the fans of Aguilera, The Jonas Brothers and The Eagles. That out-of-favor acts like Limp Bizkit canceled shouldn't send folks watchers into a tizzy.

"I mean the Limp Bizkit tour was never one that really should've been booked in the first place," Bongiovanni said. "It's hard to say that business is bad because Limp Bizkit couldn't sell tickets. I'm sorry, I don't buy that."

He did say that promoters need to get rid of the glut.

"We're asking an awful lot of the public," he said. "The acts that are really in demand today, fans are opening their wallets and buying tickets, and they're buying the premium seats, too. But in a down economic market, it just means you aren't going to do the kind of volume that you might expect and people are more selective."

Those who make their living one ticket at a time think there's more trouble ahead, though.

Lyman and others believe the cause of all these problems is simple. In an effort to shore up record sales that are bottoming out, artists and their managers and agents have turned to summer tours and the large amounts of guaranteed money now being offered upfront to prop up the revenue stream.

Instead of taking a year or two off between tours, acts always seem to be on the road -- sometimes with nothing new to offer. The bigger the venue, the bigger the guarantee and the bigger the risk that a slow start to ticket sales will lead to cancellation.

In desperation, promoters have fallen back on the steep discount, cutting prices, nixing service fees and offering two-for-one deals. Lyman sees this as fool's gold. Once ticket prices are cut, promoters rely on ancillary sales like beer and hot dogs. But he's noticed in these tough economic times, fans will bolt a six pack in the parking lot because it's cheaper than buying $7 beer all night.

"I've been saying it for a year now: We are going to train the public to wait for the discount," he said. "Go out for a fair price at the beginning and people will grow into it. But now we've got a lot of damage to fix in this business."