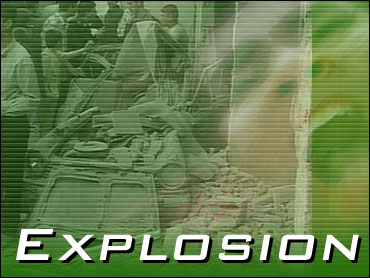 A suicide bomber detonated his explosives Sunday in a fruit and vegetable market in the coastal city of Netanya wounding at least 28 people, Israeli officials said. Israel television said at least one person was killed.

Six of the injured were in serious condition, said Yeruham Mandola, a spokesman for Israel's rescue service, Magen David Adom.

There was no immediate claim of responsibility, though Palestinian militants have carried out about 60 suicide bombings in the current Mideast conflict.

The attack came as security forces were on alert in the area of Netanya in central Israel for several hours after information was received that a suicide bomber was preparing an attack, Israel Radio said.

Netanya, which is close to the West Bank, has been frequently targeted by Palestinian militants. In March, an attack in Netanya killed 29 people at a Passover seder, sparking Israel's recently concluded five-week offensive in the West Bank aimed at dismantling the militant groups in the Palestinian autonomous zones.

The last deadly bombing in Israel was May 7, when a suicide bomber from the militant group Hamas killed 15 Israelis at a pool hall just south of Tel Aviv, in Rishon Letzion.

Israel threatened to launch an offensive in the Gaza Strip similar to the one carried out in the West Bank. However, with the United States and other countries urging restraint, Israel decided not to unleash the offensive, though it warned it might do so at a later date.

However, it was not clear how much support, if any, the plan would generate.

Peres, a leading dove, said in a radio interview Sunday that he is trying to get Sharon and the international community to support the proposal.

Sharon has accepted a Palestinian state in principle but says it can only be established after a long interim process that would last years, possibly even a decade or more. His Likud party last week adopted a resolution ruling out a Palestinian state altogether.

Peres' peace plan is partially based on understandings reached in talks he held in the past year with Palestinian parliament speaker Ahmed Qureia. Elements of it were first released to the media Saturday night.

``Our visit came as a message to show we are working as one team to achieve our goal of removing the occupation and establishing an independent Palestinian state,'' Abul-Ragheb said after the meeting at Arafat's office.

Abul-Ragheb and Muasher also briefed Arafat on the outcome of talks in Washington earlier this month between Jordan's King Abdullah II and President Bush.

The level of violence had been declining over the past week, though shooting incidents still break out daily.

Palestinian gunmen opened fire Sunday on a convoy of Jewish settlers in the Gaza Strip, the Israeli army said. During an ensuing gun battle, four soldiers were slightly wounded. The Democratic Front for the Liberation of Palestine claimed responsibility for the attack.

The Israeli army said it was investigating at its most senior levels several shootings this weekend in which three Arabs, including an Israeli Arab woman, were mistakenly killed by soldiers.

In a fourth incident, soldiers Saturday shot and wounded a deaf, mentally disturbed Israeli Arab who was wandering in the area of Jewish settlement in the West Bank and failed to hear the soldiers' calls for him to halt.

The Israeli newspaper Yediot Ahronot reported Sunday that following the shootings some senior army officers expressed concern that soldiers may have a ``light trigger finger.'' The army said military commanders were reviewing firing orders with soldiers.

Under the plan set out by Peres, the Palestinian Authority's separate security forces would be centralized into one unified command.

Israel has accused the Palestinian security forces of being involved in violence against Israelis. It has pressed for the multiple, overlapping security services to be reorganized and given clear directions to prevent attacks against Israelis.

Peres' proposal says a restructuring of the security forces would be followed by a Palestinian state established in areas the Palestinians currently control, a process that could occur within weeks.

Palestinian autonomy zones now cover some two-thirds of the Gaza Strip and islands of territory amounting to about 40 percent of the West Bank.

Peres said he and Qureia, who has been mentioned as a possible successor to Arafat, agreed during their talks that after the establishment of a Palestinian state, the thorniest issues of the conflict — final borders, Jerusalem, Jewish settlements and Palestinian refugees — could be resolved in a year of negotiations.

The agreements would be implemented over a second year.

``I prefer negotiations to shooting,'' Peres told Israel Radio. ``I realize that these issues cannot be resolved overnight. I also know that the prime minister doesn't think two years is long enough. But in my eyes it is preferable to immediately begin negotiations rather than to put them off to an unknown date.''