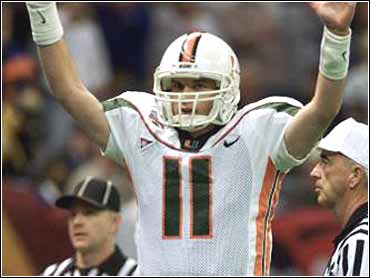 The Miami Hurricanes can call themselves Sugar Bowl champions. National champions would be nice, too.

Playing for a possible share of the national title, the No. 2 Hurricanes defeated No. 7 Florida 37-20 Tuesday night, with Ken Dorsey passing for 270 yards and fullback Najeh Davenport scoring two touchdowns.

Miami (11-1), hoping for a performance that would give voters in the Associated Press media poll reason to name them No. 1, struggled early before finally putting away the Gators (10-3).

The Hurricanes won the in-state battle that turned into a Bourbon Street brawl, and now must wait another day to see whether the victory will mean yet another split championship in college football.

"I feel like we are champions regardless," Miami receiver Santana Moss said. "We did what we had to do. I'm going to root for Florida State, because they're in the state. If they don't do their part, I won't be mad."

The issue of a split title is moot, of course, if No. 1 Oklahoma defeats No. 3 Florida State in the Orange Bowl on Wednesday, in the Bowl Championship Series national title game.

But if 12-point favorite Florida State wins, the AP title is up for grabs and the voters will have to decide whether Miami is their champion.

"We beat the No. 1 team in the nation, the No. 2 team in the nation and six teams with winning records," Miami coach Butch Davis said, recalling a season that included victories over Florida State and Virginia Tech. "I think our kids deserve every opportunity to be called national champions."

Were the Hurricanes impressive enough?

Not until Davenort scored with 4:21 left after Florida quarterback Rex Grossman's second interception of the night was this game secure. Hurricanes' mascot Sebastian the Ibis sensed it, running onto the field and drawing a 15-yard unsportsmanlike conduct penalty.

A few minutes later, the Hurricanes were jumping around at midfield. Then the wait began. Dorsey said he'll be watching the Orange Bowl intently.

"If Florida State wins, we have a great shot at being co-national champions," Dorsey said. "If Oklahoma does it, we can't do anything about that. They'd have my vote for fighting through the tough season they had."

Miami hopes to get credit for a small comeback of its own.

After a Dorsey interception, Florida went ahead 17-13 on Earnest Graham's 36-yard touchdown run early in the third quarter.

But the sophomore quarterback responded by moving Miami 80 yards in 12 plays, capped by a 19-yard touchdown to D.J. Williams. A third-down, roughing-the-passer penalty by Gerard Warren kept that drive going.

After Florida stalled, Daryl Jones returned a punt 44 yards to put the Hurricanes in striking range, then Davenport responded with the play of the game.

Linebacker Marcus Oquendo-Johnson had perfect coverage on Davenport and looked like the intended receiver, but the fullback reached over his helmet and snatched the ball away for a 10-point lead.

Another impressive point for the Hurricanes: They won with their leading rusher, James Jackson, injured most of the games and Moss playing with a hurting back.

"They're a better team than us," Florida coach Steve Spurrier said. "They made more plays when they had to. They played with more discipline and more purpose. They're just a lot better team than we are."

Among the factors voters will consider when they decide on a champion: Florida State's 30-7 victory over Florida in the final regular-season game and, of course, Miami's 27-24 win over the Seminoles back in October.

They'll also look at a 10-game winning streak, an offense that averaged 42 points a game and a defense that made big plays when it had to all season.

Miami showed parts of all that against Florida but also failed to capitalize on abundant opportunities.

A lot of this may have had to do with Florida, an overlooked underdog that came into this game hoping to get a good start on next season.

Spurrier was at his devious best. On two occasions, he pulled out one of his favorite tricks, the Emory & Henry Formation, where only three offensive linemen remain near the ball on the line of scrimmage. He uncharacteristically looked toward his running game to provide power, and it did.

When Graham scored on the play after Keiwan Ratliff's interception early in the third quarter, the Gators had the lead and the Hurricanes were simply concerned with winning the game, not the national title.

"Florida has too many great playmaker to shut them down," Davis said. "They're going to make some plays. You have to withstand the storm and minimize the damage."

Experience helped the Hurricanes do just that, and they started to look like champions toward the end.

Clinton Portis ran for 98 yards, most after Jackson went out, to keep the Miami offense moving. Moss had 89 yards in receptions even though he was hurting.

Jeremy Shockey, who caught the winning touchdown in Florida State, caught four passes and one touchdown, which gave the Hurricanes a 10-7 lead early.

Miami won its 10th straight since its 34-29 loss to Washington put it in what coach Butch Davis called a "single-elimination" situation.

This was no playoff that's several years away but the Hurricanes felt they had done everything they could to add to the national titles they won in 1983, '87, '89 and 91.

This was, however, a once-fierce rivalry that had been on hold for 13 seasons. It immediately regained its fire when the two teams made it to New Orleans. Several players fought on Bourbon Street, and both teams said it would surely add to the fire of the renewed in-state rivalry.