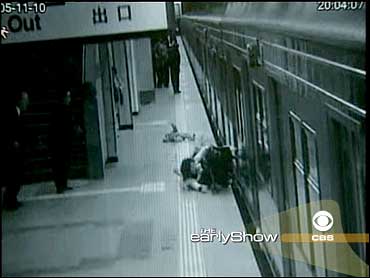 A mother and her baby narrowly escaped serious injury, and possibly death, in a subway station Thursday in Seoul, South Korea, when the baby's carriage got stuck in the closing doors of a car as the train began to move.

A surveillance camera in Seoul's Yangjae station caught the incident on tape
.

the train started to move
, Lee Chan-hee struggled to get the carriage out, but couldn't.

With the help of another woman, she finally managed to free the baby.

But then both women fell on the floor and were dragged down the platform by the train.

The baby fell to the floor and another Good Samaritan picked her up.

The train finally stopped, after dragging the mother and the second woman about 30 yards.

"I tried to get up, but my jacket was caught between the doors," Lee Chan-hee said afterwards. "As I was getting dragged and as the subway was heading toward the dark tunnel, I thought, 'I am going to die.' And I thought I was going to bump into the safety gate at the end of the platform that says, 'Do not enter.' And I thought I wanted to survive."