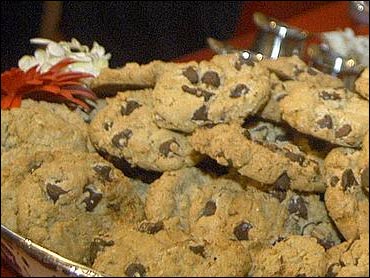 That offers some vindication to the schools across the country that have cracked down on cupcakes and cookies on campus.

Lead author Martha Kubik, an associate professor at the University of Minnesota, acknowledged her research doesn't prove that such food practices contribute to adolescent obesity, but there does seem to be a connection.

"I think we all have to step back and look at what we're doing to contribute to practices that might not support children developing healthy dietary behavior," she said.

Kids are actually eating apples and oranges instead of throwing them away. And because there aren't any candy wrappers around, he said, "our hallways are impeccable."

There was vindication, too, for Texas Agriculture Commissioner Susan Combs, who responded to rising childhood obesity by leading a statewide crackdown on junk food in schools last year. The Texas effort specifically targeted treats and bake sales, along with vending machines.

Combs said she ran up against a "very deeply entrenched culture," even among elementary school teachers, who often used candy as rewards. She said she was horrified by an e-mail from one teacher who said she couldn't imagine not using candy an incentive. Equally entrenched, she said, was the attitude that food sales were the only effective fund-raisers.

"When you have the authority figures such as teachers, principals and parents pushing food which is high in calories and low in value day after day, hour after hour in schools, it's absolutely devastating to trying to run a healthy nutrition policy," Combs said.

In Connecticut, Miller said he didn't get much resistance. He talked over alternative fund-raising strategies with the Parent Teacher Organization — options such as concerts, clothing drives and car washes.

"If you only know bake sales, that's all you think you can do," he said.

Since food rewards are banned, teachers give students pencils, protractors and other "tools of academia" bearing the school logo.

The Minnesota study looked at 3,088 eighth-graders at 16 middle schools in Minneapolis-St. Paul and whether the schools had seven specific "food practices" that would allow students access to food outside of normal meal programs. Sixty-nine percent allowed the use of food for incentives and 56 percent allowed food in classroom fund-raising.

They found that the body-mass index of students — a calculation based on weight and height — was 10 percent higher for each additional food practice allowed in their school.

The study was published Monday in the Archives of Pediatrics and Adolescent Medicine, a publication of the American Medical Association.

Teachers in these schools commonly used candy, cookies, doughnuts, non-diet soft drinks and pizza as incentives, and were less likely to give out healthier items such as pretzels, fruits, vegetables, water or low-fat milk, the study said.

Dr. David Ludwig, director of the obesity program at Children's Hospital Boston, who wasn't involved with the study called it "very interesting." He said it "raises concern for the inappropriate use of food in schools for purposes other than the nutritional well-being of children."

Karal Ann Marling, a University of Minnesota professor who writes extensively about American popular culture, dislikes vending machines in schools, but lamented the threat to the institution of the bake sale.

"It seems to me to be flying in the face of American tradition," she said, suggesting that the first place people should look is the school cafeteria. "Leave the ladies with the cupcakes alone!"