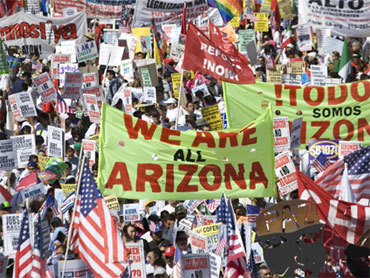 A new study suggests there may be 100,000 fewer Hispanics in Arizona than there were before the debate over the state's tough new immigration law earlier this year.

BBVA Bancomer Research, which did the study, worked with figures from the U.S. Current Population Survey. The study says the decline could be due to the law known as SB1070, which partly entered into effect in July, or to Arizona's difficult economic situation.

The study released Wednesday also cites Mexican government figures as saying that 23,380 Mexicans returned from Arizona to Mexico between June and September.

U.S. census figures from 2008 say about 30 percent of people living in Arizona are Hispanic, or about 1.9 million.

The state is appealing a ruling that put on hold parts of the law, which would have allowed police to question the immigration status of those they suspect are in the country illegally.

Immigrants are heavily employed in Arizona's construction industry, which has suffered - along with the rest of the state's economy - in the economic downturn.

In that and other studies released at the Global Forum on Migration and Development in the Pacific coast resort of Puerto Vallarta, BBVA Bancomer Research - part of the financial group of the same name - estimated that probably about 720,000 Mexican migrants were unemployed in the United States when the study concluded in late October.

The study also predicts that remittances - the money sent home by migrants working abroad - won't recover their peak value of about $26 billion until 2012 or 2013.

Remittances are Mexico's second-largest source of foreign income after oil exports. Nearly all of the money comes from the U.S., where nearly 12 million Mexicans live.

The research center also estimated that remittances were dwarfed by the amount of money Mexican migrants paid in taxes in the United States - about $53 billion in 2008.