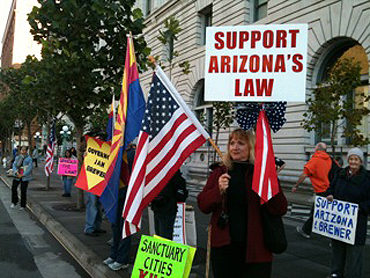 Approximately 250 people protesting Arizona's tough and controversial new immigration law were massed outside a San Francisco courthouse where a panel of judges was hearing an appeal brought by Arizona Gov. Jan Brewer.

The central issue of today's hearing was what role state and local authorities can play in confronting those who cross the border illegally.

About a dozen supporters of the law had also gathered outside the 9th U.S. Circuit Court of Appeals.

A three-judge panel is considering Gov. Brewer's appeal of a judge's ruling that put on hold parts of the law.

Among the blocked provisions is the requirement that police - in enforcing other laws - must question the immigration status of those they suspect are in the country illegally.

At a press conference following this morning's arguments, Brewer said, "It is a little bit shocking that the U.S. government would take us on" with respect to illegal immigration, reports CBS News' Christine Weicher. "We are not their enemy - we are part of the United States of America."

Brewer also said, "The people of the United States agree with us."

The three judges at today's closely watched hearing were chosen randomly to hear Arizona's appeal. They include Judge Richard Paez, a Clinton appointee who is the son of Mexican immigrants; John Noonan, a Reagan appointee and a moderate; and Carlos Bea, an appointee of George W. Bush who was born in Spain and once was reportedly ordered deported from the United States. Bea appealed and won.

Minutes after the arguments began, Judge Paez began questioning lawyers arguing in support of the contested law. Paez said he did not agree with the argument presented, saying at one point they were "arguing something that is foreclosed to us."

Following the hearing, Gov. Brewer released a statement stating: "This case is about what a state - any state - can do about a failed federal immigration system that even President Obama acknowledges is broken. The health, welfare and safety of the citizens of Arizona are irreparably harmed every day the courts allow SB 1070 to be put on hold and the federal government refuses to enforce all immigration laws."

The 9th Circuit's decision on the Arizona law is expected to send a strong signal to other states considering similar laws.

When the law passed and was signed by Brewer on April 23, it touched off a national furor with supporters calling for similar legislation for their own states and detractors calling for an economic boycott of Arizona. Senate Bill 1070, as it is known, also blew up into a huge political issue during this year's mid-term elections.

The Arizona law was passed by the Legislature amid years of complaints that the federal government hasn't done enough to lessen the state's role as the nation's busiest illegal entry point. Its passage ignited protests with thousands taking to the streets of Phoenix over whether the law would lead to racial profiling and prompted lawsuits by the U.S. Justice Department, civil rights groups and other opponents seeking to throw out the law.

Less than a day before the law was to take effect, , including a requirement that immigrants get or carry immigration registration papers. But she let other portions take effect, including a ban on obstructing traffic while seeking or offering day-labor services on public streets.

The Department of Justice argues the ruling should be upheld because the law interferes with the federal government's exclusive power to regulate immigration, disrupts the United States' relations with Mexico and wrongly burdens legal immigrants.

Goddard, who is Arizona's attorney general, said Brewer has no role in the proceeding.

"Actually, the federal government has sued the state of Arizona and Janice K. Brewer, and certainly out of respect for the judicial system, I think I ought to be there," Brewer told CBS Affiliate KOLD before leaving for San Francisco.

The fate of the law hinges on what's known in legal circles as "pre-emption" - whether federal law trumps state law.

Stephen Yale-Loehr, who teaches immigration law at Cornell University and wrote a 20-volume treatise on U.S. immigration law, explained pre-emption as the division of powers where the federal government has the authority to declare war and send ambassadors to foreign countries and the states can regulate traffic and investigate crimes.

"Where does immigration fall in that spectrum?" Yale-Loehr asked. "The Arizona statute puts that issue front and center."

In her ruling, Bolton said she believed the Justice Department would likely succeed on some of its claims that federal law trumped state law.

The Arizona immigration enforcement law isn't the only one that has challenged federal primacy in immigration.

The 3rd U.S. Circuit Court of Appeals in Philadelphia ruled in September that a local immigration law in Hazleton, Pennsylvania, had usurped the federal government's exclusive power to regulate immigration. The city had sought to fine landlords who rent to illegal immigrants and deny business permits to companies that give them jobs.

The U.S. Supreme Court also is set to hear arguments on Dec. 8 in an appeal by groups that are trying to overturn a 2007 Arizona law that prohibits employers from knowingly hiring illegal immigrants.

Peter Spiro, who teaches immigration law at Temple University's law school, said either law from Arizona could be a platform for the Supreme Court to confront the question of whether states and communities can participate in immigration enforcement, a subject that the nation's highest court hasn't taken up since 1976.

Spiro predicted that the 9th Circuit Court of Appeals will likely uphold the lower court's ruling on Arizona's SB1070.

"If I were betting, I think the (Supreme Court) will strike down SB0170 at the same time that it allows some room for discretion at the state level," Spiro said.