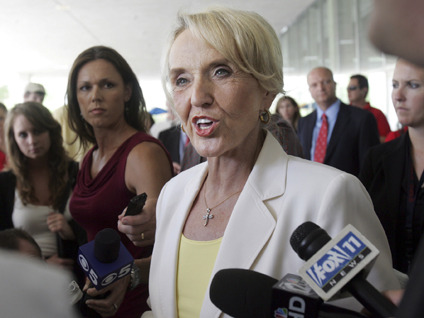 District Judge Susan Bolton brought key parts of Arizona's controversial immigration law to a slamming halt yesterday, but the practical and political fallout from her decision is just now unfolding.

Arizona Gov. Jan Brewer said the state will file an expedited appeal today, the Arizona Republic reports, and ask the 9th Circuit Court of Appeals to lift Bolton's injunction on the four most contentious portions of the law. The state will also ask the court to fast-track court filings and a ruling.

Meanwhile, law enforcement officials are grappling with how to proceed. Other elements of the law still take effect today, including a provision allowing Arizona residents to sue if they feel the police department is impeding enforcement of immigration laws, as well as a provision that makes it a crime to impede traffic by picking up day laborers on the side of the road.

A number of police agencies say they plan to maintain existing protocols while waiting to see what happens next in the legal battle over the new measures, according to the Arizona Republic.

Demonstrators for and against the law are discussing their next steps, the newspaper reports, while everyone waits for Bolton to rule on six additional lawsuits filed against the immigration measure, SB 1070, filed by groups like the ACLU.

In the meantime, Republicans are using the setback against the generally popular law to galvanize their conservative base.

For instance, GOP Senate candidate Jane Norton in Colorado is launching a new round of automated phone calls informing voters that she is proud to have the endorsement of Arizona's governor, the Wall Street Journal reports.

Rep. John Boozman, the Republican Senate candidate in Arkansas, told the Journal the SB 1070 debate is a "defining issue" and that it comes up for discussion at every town hall meeting he holds.

The Republican Governors Association released a fundraising e-mail from Brewer, asking supporters to donate to the RGA to help the "fight" for border security.

All the attention on the debate may be bad for Democrats from more culturally conservative states, but it could work to the advantage of Democrats in states with critical Latino voting blocs, according to analysis from Josh Kraushaar of National Journal. Republicans in states like California, Florida and Nevada will have to walk a fine line between rallying their conservative base and maintaining some support among Hispanics.

"Immigration has become less of a partisan issue and more of a regional issue in recent years," Kraushaar writes, "that's sure to be reflected as candidates come out with their reactions."

Meanwhile, a number of other states may be rethinking their own proposals to move forward with laws similar to Arizona's.

"This is a warning to any other jurisdiction" considering a similar law, said Thomas A. Saenz, president of the Mexican American Legal Defense and Educational Fund, reports the New York Times.