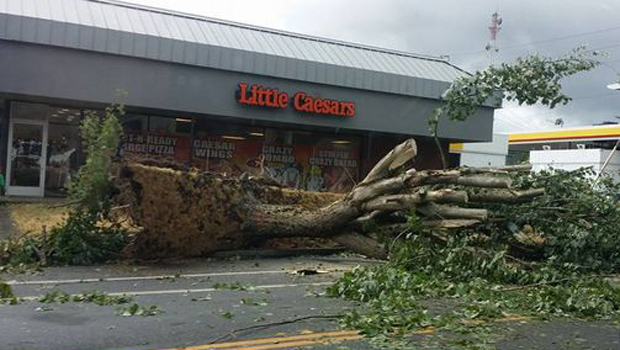 SEATTLE -- Powerful winds toppled trees and power lines across the Pacific Northwest on Saturday, causing two deaths in the Seattle area and knocking out electricity to at least a quarter-million customers in Oregon and Washington.

A 10-year-old girl awake after a sleepover was killed when she was struck by a tree branch blown off in the wind, CBS affiliate KIRO-TV reported. The girl was outside her friend's apartment in Federal Way.

One man was killed when a tree fell on a car in Gig Harbor, Washington, the Seattle Times reported. His 3-year-old daughter was in the back seat, but she was not hurt.

Falling trees or branches injured at least two people during a triathlon at Joint Base Lewis-McChord, south of Seattle. They were taken to an Army hospital for treatment, base spokeswoman Kelsy Hustead told the News Tribune of Tacoma.

The National Weather Service reported 20 to 35 mph winds, with gusts of 50 mph. One weather station in Hoquiam clocked a gust of 63 mph.

Late August is unusually early for such a powerful storm, meteorologists said. Trees, already stressed by dry conditions, still have their leaves, which makes them more likely to fall when strong winds blow.

Crews working to restore power were taxed by the storm's breadth. It tore trees out of the ground across a vast swatch of the Pacific Northwest, stretching manpower and equipment thin.

"If it just hits one part of our service area, you can maybe send crews down from another area. But this is a service-area-wide event," said Christina Donegan, a spokeswoman for Puget Sound Energy, which reported 140,000 customers without power mid-afternoon. The figure was expected to grow.

In Oregon, Portland General Electric reported more than 20,000 were without power.