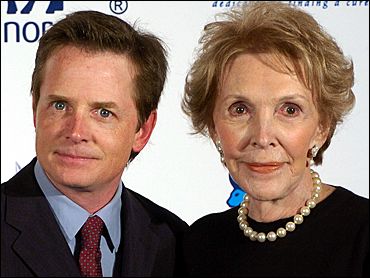 "There are so many diseases that can be cured or at least helped. We have lost so much time already and I just really can't bear to lose anymore," she said.

At a juvenile diabetes fund-raiser, she spoke of her husband's battle with Alzheimer's, one of many diseases scientists believe cells from discarded embryos may one day cure, reports CBS News Correspondent Vince Gonzales.

"Ronnie's long journey has finally taken him to a distant place where I can no longer reach him," she said. "Because of this I'm determined to do whatever I can to save other families from this pain."

Mrs. Reagan's stance puts her at odds with President Bush, who has placed strict limits on stem cell research, and the anti abortion rights movement which objects to the use of cells from human embryos.

She was introduced by actor Michael J. Fox, who suffers from Parkinson's disease, and was widely applauded by a Hollywood audience that included movie stars and other celebrities.

Mrs. Reagan made her views on stem cell research known more three years ago, becoming one of the first conservative-minded public figures to buck the Bush administration's restrictive funding policy.

Since then, prominent Republicans such as Utah Sen. Orrin Hatch and Pennsylvania Sen. Arlen Specter have also endorsed the research.

Supporters describe stem cells as blank slates created in the first days after conception that scientists might someday be able to manipulate into adult cells that could be used to treat diseases.

But many anti-abortion activists view the work as immoral because they believe life begins at conception, and the research involves destroying days-old human embryos.

The Bush administration has said it has no plans to change its policy, which limits federal funding to stem cell colonies created before August 2001.

Still, growing numbers of federal lawmakers - including several
staunch anti-abortion Republicans and party stalwarts like Senate
Majority Leader Bill Frist, who is also a heart surgeon - are
lobbying Mr. Bush to reconsider his policy. Last month, 206 members of
Congress sent Mr. Bush a letter calling on him to reconsider his stem
cell policy.

Mr. Bush has ordered the National Institutes of Health not to fund
any research on stem cells harvested from embryos after Aug. 9,
2001.