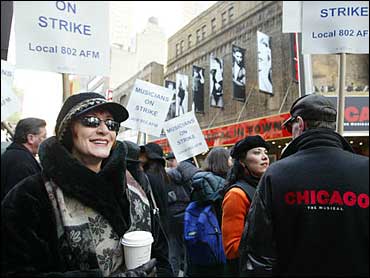 What caused much of Broadway to go dark as contract negotiations between theater producers and striking musicians collapsed, silencing virtually every musical?

On Saturday each side met privately with its own members to assess the situation. But both sides couldn't even agree on what they were talking about.

The union insists the fight to keep minimums - the number of musicians required for each show - is part of a larger battle to preserve live music on Broadway. The League of American Theatres and Producers see it in terms of artistic freedom, hiring only the musicians they say they need.

And as musicians became convinced the so-called virtual orchestras, computer-generated music brought in to replace them, wouldn't work well, they hardened their position on minimums and walked out Friday.

What producers didn't expect was that actors and stagehands would refuse to cross their picket lines.

Originally producers proposed the number of musicians required for the large Broadway theaters be reduced to seven, a figure they later raised to 14 and most recently to 15. The minimums at those large theaters currently range from 24 to 26.

"Theatergoers are the ultimate losers," Jed Bernstein, league president, reiterated Saturday. "Broadway has a very strong emotional bond with its customers and it's a compact that has been broken now."

Eighteen musicals, from "Hairspray" to "The Producers" to "The Lion King," are dark through Sunday and possibly beyond, the first shutdown of shows in more than 25 years.

Shutting down these 18 shows has cost about $1.2 million per performance in terms of lost box-office revenue, or nearly $5 million for all four performances this weekend, according to Bernstein.

Picketing took place again Saturday in front of theaters before what would have been matinee performances. Backstreet Boy Kevin Richardson stood with musicians in front of "Chicago," in which he plays shady lawyer Billy Flynn, while two stars of "The Producers," Brad Oscar and Gary Beach, were at the St. James Theatre with orchestra players from their show.

"I think we're all surprised and disappointed - it's not good for anybody," a glum Oscar said.

The strike boosted business for those productions, primarily plays, that are still open. The revival of "Cabaret," the one Broadway musical unaffected by the strike because it operates under a special contract, had 50 people in line Saturday morning when its box office opened. The show was expected to sell out throughout the weekend. "Frankie and Johnny in the Claire de Lune" sold 300 tickets between 7 p.m. and 8 p.m. Friday when word of the strike began to filter out. Business was also strong at "Take Me Out," the Richard Greenberg baseball drama.

The union has been aggressive in courting public opinion - producing audiences surveys saying that theatergoers don't want canned music (a term the producers hate), enlisting the support of Broadway composers such as Jerry Herman and John Kander, and having performers such as Patty Duke and Audra McDonald do radio commercials in support of the musicians.

They were helped by the fact that actors disliked rehearsing with the virtual orchestras.

"We're artists and a machine is a dead thing," said Harvey Fierstein, star of "Hairspray." "Though it's played by a human being, it still is a computer. And it's certainly not why I want to be in the live theater. I want to be there with musicians, so that when I mess up, they can laugh."

"The live music really adds a lot, theater-goer Heidi Erickson told WCBS-AM radio in New York. "It's an essential part of the theater. It makes it different than just going to the movies."