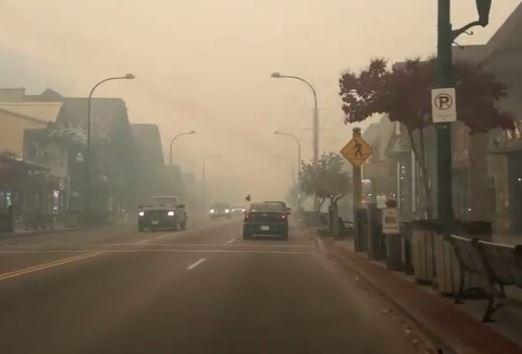 GATLINBURG, Tenn. -- Emergency officials in Tennessee say a wildfire has set 30 structures ablaze in Gatlinburg, including a 16-story hotel, and is at the edge of the Dollywood theme park.

Tennessee Emergency Management Agency spokesman Dean Flener says in a news release Monday night that mandatory evacuations were underway for areas in and around Gatlinburg, including the south part of Pigeon Forge, where Dolly Parton’s theme park is.

TEMA said no deaths have been reported.

The National Guard has been mobilized to Sevier County, CBS affiliate WVLT reported.

A representative with the park said the air quality is unhealthy for the Sevier County section of the park and adjacent areas, especially in the Gatlinburg area due to heavy smoke from the nearby Chimney 2 Fire. The Sevier County Humane Society said all animals are safe.

Storms roaring across the South appeared to be taking aim at some of the largest wildfires burning across the region, which could finally help firefighters in their efforts to subdue the blazes, authorities said Monday.

As the storm system passed over Mississippi, Alabama and Tennessee late Monday, it was heading toward some of largest wildfires in Georgia and North Carolina.

The rain forecast “puts the bull’s-eye of the greatest amounts right at the bull’s-eye of where we’ve been having our greatest activity,” said Dave Martin, deputy director of operations for fire and aviation management with the southern region of the U.S. Forest Service.

The projected rainfall amounts “really lines up with where we need it,” Martin said Monday. “We’re all knocking on wood.”

Yet after weeks of punishing drought, any rain that falls should be soaked up quickly, forecasters said. It will provide some relief but won’t end the drought -- or the fire threat, they say.

“I think we racked up deficits that are going to be too much to overcome with just one storm system,” said Mark Svoboda, director of the National Drought Mitigation Center in Lincoln, Nebraska.

Monday afternoon, exhausted firefighters continued to battle brush fires across the state as their jobs are made harder by strong wind gusts across central Alabama ahead of possible severe weather this evening, CBS affiliate WAIT reported.

As of 2:30 p.m. Monday, the Alabama Forestry Commission said there are 20 active fires in the state. One is on the Walker County/Cullman line on Highway 127 in Bremen.

The rain also brings danger because strong winds at the leading edge of the storms can topple trees and limbs that can kill and injure firefighters, he said.

In Mississippi, trees were reported downed in nearly 20 counties across the state. Sustained winds of 30 to 40 mph with gusts of more than 50 mph were reported and more than 2 inches of rain fell in some areas.

The storms were moving across Alabama on Monday night and were expected to slam into Georgia during the overnight hours. High wind warnings were issued for mountainous areas in northern parts of Georgia.

In South Carolina, the stormy forecast was giving hope to firefighters battling a blaze in the northwest corner of the state. The South Carolina Forestry Commission hopes to contain the Pinnacle Mountain fire by the middle of next week.

More rain was expected Tuesday night and Wednesday morning in parts of Louisiana, Mississippi and Alabama.