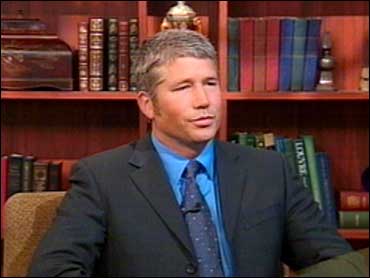 "What should I do with my life?"

It's a question people are constantly asking themselves.

It's also the title of a book that's made it to the top of many best-seller lists. Author Po Bronson stops by The Early Show on Tuesday to tell why his book is resonating with many readers.

He says, "Three years ago, right about this time, I was at a crossroads. I had been laid off; I had a baby on the way, my first. I was scared. And I kind of saved my soul by trusting my artistic instinct and recording the stories of people who had done what I wanted to do, which was to remake my life, embracing greater truth and meaning - people who had broken away from the chorus to hear the sound of their own voice.

"And my wife really supported it. When my son was born, we traveled a lot and over the next year and-a-half, I recorded 900 people's stories, over 50 of which are in the book."

In hardcover, "What Should I Do with My Life?" was a No. 1 national best seller. Bronson has added nine new stories to the new paperback edition.

He notes, "We often tell these transformation stories like myths: I made my life overnight. It doesn't happen overnight."

Bronson is also the author of two novels, "Bombardiers" and "The First $20 Million is Always the Hardest," and the nonfiction book, "The Nudist on the Late Shift."

Bronson is on the board of directors of Consortium Book Sales and Distribution and the editorial board of "Zoetrope: All Story" magazine.

He has written for the New York Times Magazine, The Wall Street Journal, Fast Company and Wired.

Read an excerpt from "What Should I Do with My Life?"

There's More to Motherhood than Baking Cookies
NEVER GIVE UP

When Mary Ann Clark graduated from college in 1960, she wanted to save the world – from poverty, birth defects, and malnutrition. "But if I had anything to give, I thought I should give it to my children first." Twenty years and four children later, on the verge of starting the career she'd looked forward to for so long, she unexpectedly got pregnant again, and gave birth in her early forties to a fifth child. The second phase of her life turned out to be the same as her first. Many moms awed me with their patience, but Mary Ann lapped them all. She and I corresponded for several months, and I went to see her the day after her 65th birthday – an age that many consider retiring, like her husband Hal, who was making plans. But retirement didn't interest her at all. "I've just started working!" she smiled. "And I'd like to continue!" She is the field interviewer for a large research study of childhood leukemia. She travels all over Northern California. "This is exciting for me! I've got to make a contribution!"

I insert her story here for several reasons:

1. this rolling conversation is badly in need of a mother's story;

2. the last couple stories suggest it's okay, it's normal, to take many years before pursuing your calling, and Mary Ann's story is here to ring it louder – yes, yes!;

3. you can have more than one purpose in life, and you can do them together or do them sequentially, it doesn't matter, so long as you are pursuing them and not some other unimportant thing.

"I'm from the 'Because I Said So' generation," she remarked. That's not how she raised her kids – that's how she was raised, in urban Philadelphia. She was one of six children. Her mother gave birth to three before the war, and to three more after the war. Mary Ann's grandmother had passed away in between, and so her mother had little help in raising the second crop. Mothering was hard enough without a second hand, and young Mary Ann took note of this. She took note of the grudge her mother seemed to bear. She took note of the counterexample – one of her father's sisters. This aunt was unmarried, and an accountant, and traveled frequently, and always had a story to tell. So did her father, who was a biochemist and always interested in diet and nutrition. At the dinner table, he always had something in his day to recount, while her mother didn't. He seemed to have more fun. On Saturdays, when he worked a half day, he would often bring the children to his lab. This made an impression on Mary Ann. She had a brain and wanted to use it. Housework didn't appeal to her. She never assumed she would get married. Carrying on in the vein of her father, she studied Food and Nutrition and minored in Science, graduating with a B.S. in Home Economics from LaSalle. The summer prior, she had worked as a dietician at Fitzgerald Mercy Hospital. She'd loved it and planned to return. The job was waiting for her.

But Hal wanted to get married. He campaigned hard. Hal had gone to high school with her brothers, while she was at Little Flower. They didn't date then, but "he was The Boy of My Dreams and the dream never died," Mary Ann explained. He came back into her life in college. Mary Ann was torn. "I made the right choice, but for the wrong reasons," she admitted. "I thought I could marry Hal and still do whatever I wanted. I liked the idea of independence." She had little intention of giving it up, but soon discovered the necessary compromises of partnership. Mercy Hospital was on the other side of Philly, an hour and a half bus ride each way. Working there was impractical. Anyway, she got pregnant quickly.

"Back then, that's just the way it was. I was a Catholic schoolgirl of the '50s. My classmates and friends were doing the same. I thought I had so much to offer society. We had a do-gooder attitude. But first, I wanted to give it to my children. Whatever you can give your children – it's free. If I didn't give them language, culture, attitudes, they'd have to start from scratch. My first responsibility was to them. In the first ten years, there was never a time that I wasn't either pregnant or nursing a baby. There was plenty of time in the future to have a career. But I didn't at all feel like I had dropped out. I still had that sense of worth – I'd gone to college! That was special. We had so much optimism and energy."

Hal was offered a job with IBM, and they soon moved to Hopewell Junction, New York, (pop. 4,000). Mary Ann ferried her kids to swim practice and planned Girl Scout meetings and drove the elderly ladies next door to the store. She tended an organic garden and built a solar addition. And still had more energy to give.

"It was around the early '70s that women began the mantra, 'There's more to life than baking cookies,' and I couldn't have agreed more."

She played the organ at church and served on the Women in Church Committee for the Archdiocese of New York. She was on the local conservation commission. In the early '70s, she began substitute teaching at the junior high, her youngest girl in tow. Most of her friends were doing the same, working their schedule around their children. By law, Mary Ann was limited to substituting 80 days a year unless she had a teaching credential or master's degree,. So when Route 84 opened to Danbury, Mary Ann started taking one class a semester at night at Western Connecticut University. She was patient, so patient. By the time her youngest was in junior high school, most of Mary Ann's friends were well-entrenched in the job market as nurses or dieticians or teachers. Money was tight for the Clarks; the padding in their budget went straight to college tuition. They needed a second income. In December of 1979, she completed her coursework for her master's degree in General Education. Her youngest, Karen, would start high school the next fall. Mary Ann would begin teaching health education full-time.

Finally, the payoff for her patience!

But in February, she discovered she was pregnant. Mimi, their fifth child, was born on Thanksgiving 1980.

"One must deal with the cards they are dealt," Mary Ann insisted. Then, "I can't say, it wasn't without a lot of frustration. I'm better with babies than I am with pregnancies. I had my moments." Then, back to her optimism: "Of all the things that could have happened to us, relatively, a baby was easy to deal with. We had friends with cancer and MS and heart disease." Mary Ann described her ambiguity of feeling as a cross between Walter Mitty and Eyeore. "I have spent most of my life planning a vision of what I would do after my family was grown."

I'm not doing this story justice. I think Mary Ann felt the same way when she was telling it to me. I think so many mothers feel that way, period. Mother stories are very hard to tell. There's a tendency – a gravitational pull – to deliver them in the same cadence as we tell career stories. We list projects and achievements that don't have anything to do with nurturing our children. So twenty years of Mary Ann's mothering is described by naming the committees she served on. The truth is, all those side projects were not nearly as much work as the daily attentions required in raising four children...