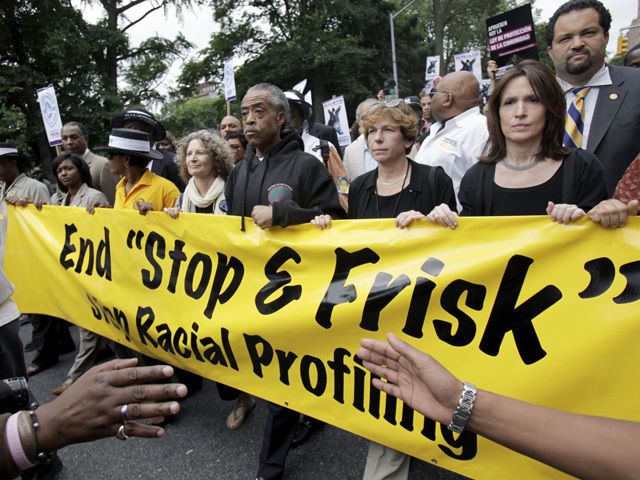 (CBS/AP) NEW YORK -A federal court's decision to overturn a judge's ruling that found the New York Police Department's stop-and-search policy discriminated against minorities and must be reformed may be short lived, depending on the outcome of next week's mayoral election.

The 2nd U.S. Circuit Court of Appeals said Thursday thatthe ruling by U.S. District Judge Shira A. Scheindlinwould be on hold pending the outcome of an appeal by the administration of Mayor Michael Bloomberg, who has touted the tactic as a major reason crime rates have continued to fall in the city.

The court also took the unusual step of removing Scheindlin from the case, saying she ran afoul of the code of conduct for U.S. judges by giving media interviews during the trial.

The topic of stop and frisk became an election flashpoint, resonating nationwide. Police Commissioner Raymond Kelly was shouted down over the tactic by students during a speech at Brown University earlier in the week.

The fight could be dropped if Democrat Bill de Blasio, who is leading the polls in the mayor's race by 39 points, has his way. He has said he would drop objections to the decision, which calls for a monitor to oversee major changes to the police tactic.

"We have to end the overuse of stop and frisk - and any delay only means a continued and unnecessary rift between our police and the people they protect," De Blasio said in a statement.

Stop and frisk has been around for decades, but recorded stops increased dramatically under Bloomberg's administration to an all-time high in 2011 of 684,330, mostly of black and Hispanic men. Four minority men who said they were targeted because of their races filed a lawsuit, and it became a class-action case.

To make a stop, police must have reasonable suspicion that a crime is about to occur or has occurred, a standard lower than the probable cause needed to justify an arrest. Only about 10 percent of the stops result in arrests or summonses, and weapons are found about 2 percent of the time.

Scheindlin decided in August that the city violated the civil rights of tens of thousands of blacks and Hispanics by disproportionally stopping, questioning and sometimes frisking them. She assigned a monitor to help the police department change its policy and training programs on the tactic.

Scheindlin's decision coincided with a groundswell of backlash against the stop-and-frisk tactic. She noted in her ruling this summer that she wasn't putting an end to the practice, which is constitutional, but was reforming the way the NYPD implemented its stops.

The Thursday ruling overturning Scheindlin's decision was a win for Bloomberg, who has defended the tactic as his third and final term as mayor winds down.

"For the next 60 days, we don't want an outsider coming in who doesn't know anything about crime fighting, putting the lives of our police officers and the lives of the public on the line," Bloomberg said Friday on his weekly WOR Radio show.

Police officers have "had their names dragged through the mud over the past year and I think they deserve a lot better than that," Bloomberg said. "We want them to understand that we support them and we are in conformity with the requirements of the law."

In its removal of Scheindlin, the three-judge appeals panel said she misapplied a related case ruling that allowed her to take the case. It also noted she had given a series of media interviews and public statements responding to criticism of the court. In a footnote, it cited interviews with the New York Law Journal, The Associated Press and The New Yorker magazine.

In the AP interview, Scheindlin said reports that Bloomberg had reviewed her record to show that most of her 15 written "search and seizure" rulings since she took the bench in 1994 had gone against law enforcement was a "below-the-belt attack" on judicial independence. She said it was "quite disgraceful" if the mayor's office was behind the study.

Scheindlin said in a statement later Thursday she consented to the interviews under the condition she wouldn't comment on the ongoing case. "And I did not," she said.

In 2007, Scheindlin told the same lawyers who had argued a similar case before her to bring the stop and frisk case to her, because she said the two were related. Not long after, the current case was filed by the attorneys.

The appeals court said a new judge would be assigned at random to handle further decisions and said it would hear arguments in March on the formal appeal by the city. That judge may choose to make alterations to Scheindlin's rulings, but it would be unlikely.

The Center for Constitutional Rights, which represented the four men who sued, released a statement saying it was dismayed that the appeals court delayed "the long-overdue process to remedy the NYPD's" stop-and-frisk practices and was shocked that it "cast aspersions" on the judge's professional conduct and reassigned the case.

The statement went on to say that the City carried out a "whisper campaign" against Judge Sheindlin but never raised any legal claims of bias.

"That, unprompted, they should reassign the case from a judge deeply steeped in the issues for the last 14 years, who gave the City every opportunity to defend itself in the course of this litigation, is troubling and unprecedented," the group said.

Complete coverage of the Stop and Frisk policy on Crimesider