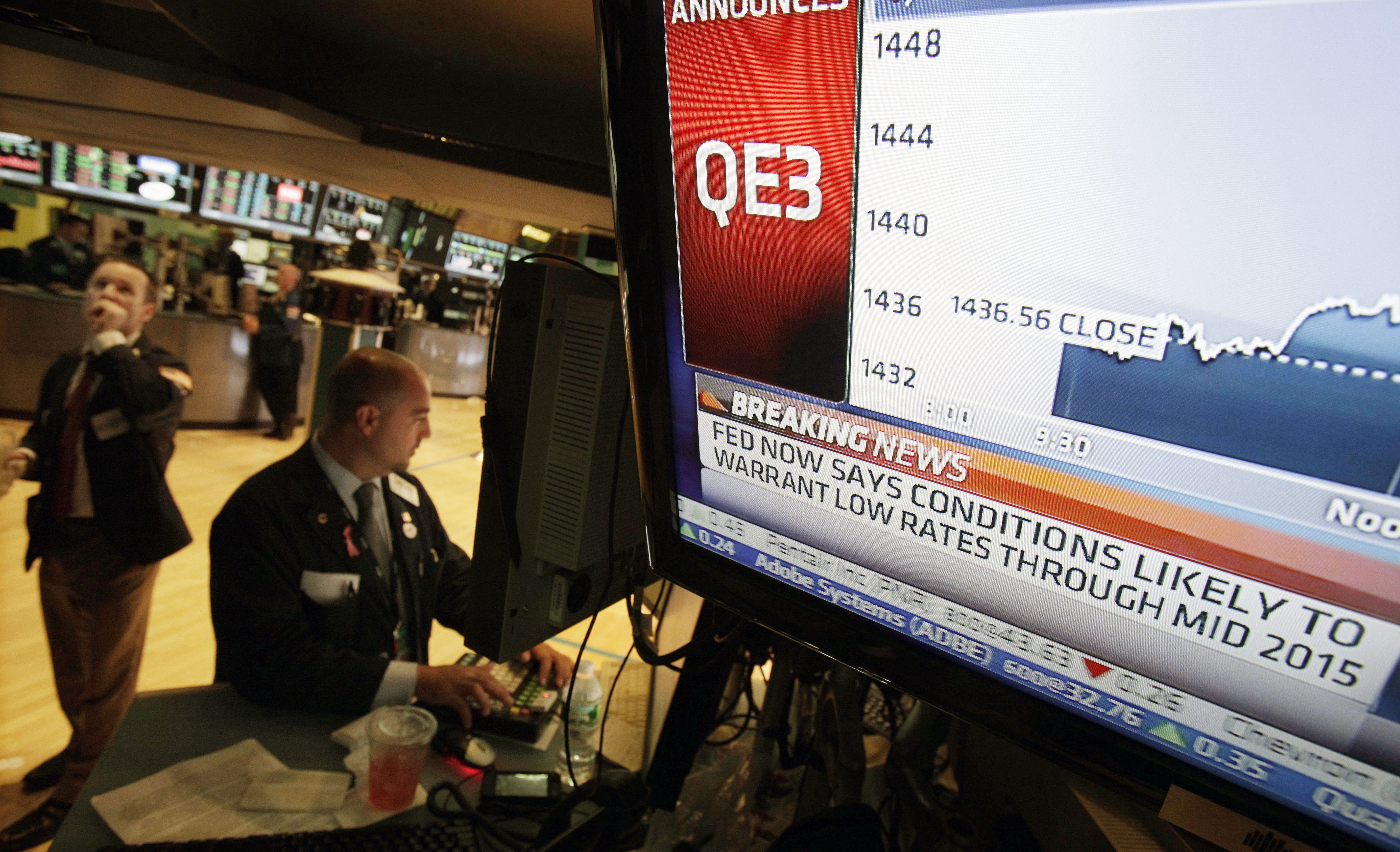 (CBS/AP) NEW YORK - U.S. stocks surged Thursday after the Federal Reserve unveiled a long-awaited package of aggressive steps to spur economic growth. The Dow Jones industrial average jumped more than 200 points to its highest point since the start of the Great Recession.

The central bank said it would spend $40 billion a month to buy mortgage securities because the economy is too weak to reduce high unemployment. It said it would keep buying bonds until the job market shows substantial improvement.

The help was open-ended. The central bank also extended its pledge of near-zero interest rates into 2015, and promised to keep "highly accommodative" monetary policy in place even after the economic recovery strengthens.

Fed to spend $40B a month on bond purchases
Why did the Fed act now to boost the economy?
CBS MoneyWatch primer on "quantitative easing"

It was the action investors had been hoping for. "They're saying that the punch bowl, the fuel for the economy, isn't going away - it's going to be here as long as you need it," said Tony Fratto, a former aide to President George W. Bush and managing partner at Hamilton Place Strategies, a policy consulting firm in Washington.

He said he expects investors to keep shifting from safer assets like government bonds to stocks. That could push stock prices higher, kicking off a cycle of increased wealth and increased spending.

"People will feel more confident, consumers will buy more goods and GDP growth will increase," he said, referring to the gross domestic product, or economic output.

The stock market had already enjoyed a summer rally, in part because investors were betting on more Fed action. The Dow has climbed about 1,100 points since the start of June.

Still, stocks spiked Thursday in industries across the economy. Materials companies, which tend to do well when the economy picks up, enjoyed the biggest gain -- 2.4 percent as a group. Bank stocks also surged.

This is the third round of bond-buying by the Fed since the financial crisis struck in the fall of 2008. The goal is to lower long-term interest rates, get people to borrow and spend more and push them into stocks.

Some economists and investors have warned that the bond-buying will have a limited impact because interest rates are already near record lows.

The yield on the benchmark 10-year Treasury note fell slightly to 1.77 percent from 1.79 percent late Wednesday. It had spiked to 1.84 percent as investors sold bonds after the Fed announcement.

The dollar fell slightly against major currencies, and the price of gold climbed to its highest level since February.

Investors were also keeping an eye on turmoil in the Middle East. Protesters stormed the U.S. Embassy compound in Yemen's capital Thursday, and there was more violence around the U.S. mission in Cairo. The U.S. ambassador to Libya was killed Tuesday.

In other news Thursday, the Labor Department reported that the number of people seeking unemployment benefits jumped last week to the highest level in two months, though the figures were skewed in part by Hurricane Isaac.

The government also said that wholesale prices rose 1.7 percent in August, the most in three years. They were driven up by higher costs for gas and food. Removing the impact of energy and food, however, the increase in prices has been mild.

The Fed action combined with the Middle East turmoil pushed crude prices slightly higher. Oil was up 42 cents, or 0.5 percent, at $97.43 on the New York Mercantile Exchange.

Recliners recalled due to fire hazard