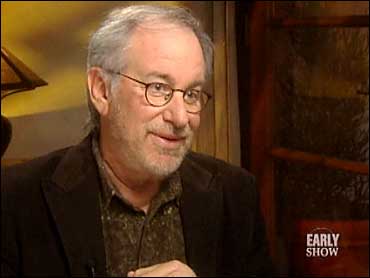 House Democratic leader Nancy Pelosi - who will lead the minority, not the majority, in the new Congress - is reportedly turning to another Californian for advice on how to improve the image of her and her colleagues: Filmmaker Steven Spielberg.

Included in a story on Pelosi in the Washington Post yesterday that got a little bit lost amid the activity around the busy last day of Congress was news that lawmakers say Pelosi is now "consulting marketing experts about building a stronger brand."

"The most prominent of her new whisperers is Steven Spielberg, the Hollywood director whose films have been works of branding genius," the story said. "Lawmakers said Spielberg has not reported to Pelosi with a recommendation."

As Rachel Weiner, who flagged the quote, notes, Spielberg is a longtime Democratic power player who backed Hillary Clinton in the 2008 election cycle but has since raised money for President Obama.

If Pelosi does end up putting into practice advice from Spielberg, she'll be hoping that it is received as well as the director's "Saving Private Ryan," "E.T.: The Extra-Terrestrial" or "Jurassic Park" - and not, say, "Indiana Jones and the Kingdom of the Crystal Skull."

House Democrats lost 63 seats in the midterm elections, the largest net loss since 1938. Many expected Pelosi to step down from the House leadership in the wake of the loss, but she chose instead to seek reelection to the top House Democratic slot. She won the racedespite the opposition of many Blue Dog Democrats, who felt the party needed to move in a more centrist direction.

One oft-used tactic by opponents of vulnerable Democrats in the midterm elections was to tie those Democratic representatives to their party leader, Pelosi, who was often described derisively as a liberal possessing "San Francisco values." Pelosi has vowed to focus on job creation in the new Congress.

UPDATE: A Spielberg spokesman is denying the story.

"I can say as a long-time spokesman for Steven that he has made it his career to direct actors, not political figures," spokesman Marvin Levy told The Hollywood Reporter.