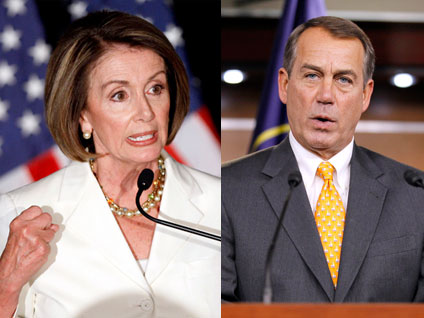 Nancy Pelosi has been elected to lead House Democrats in the new Congress despite presiding over the loss of more than 60 House seats in the midterm elections.

The 70-year-old California liberal was opposed by Rep. Heath Shuler of North Carolina in her bid to become minority leader in the new Congress. Shuler argued that Pelosi needed to go after presiding over the loss of the chamber earlier this month.

"There was a lot of unrest in the room for several hours," Shuler said following the vote, arguing the strength of his challenge "sends a message" that the party needs to change direction.

Pelosi ultimately had little trouble repelling the challenge from Shuler, one of the relatively-conservative Blue Dog Democrats who saw their numbers decimated in the midterms. The secret ballot vote was 150 for Pelosi to 43 for Shuler.

Following the vote, Pelosi said "it's about jobs, about reducing the deficit, and about fighting for the middle class, so I look forward to doing that with this new leadership team."

Republicans also held their House leadership elections today, electing Rep. John Boehner as their leader and presumptive speaker of the House in the next Congress. Boehner, who was not opposed, is the current minority leader. The vote comes on his 61st birthday.

"This is the dawn of a new majority - one I believe will be humbler, wiser, and more focused than its predecessors on the priorities of the people," Boehner planned to say in accepting the post, according to his prepared remarks.

"The job of the next Speaker is to work to restore the institution - restore it to being the Peoples House," he continued. "It's not about us; its about them. And what they want is a smaller, less costly, more accountable government. More jobs, less spending. It's that simple."

In a sign of Pelosi's strength, Democrats voted 129-68 to proceed to a vote earlier in the day over objections from those who sought a delay in order to have more time to mount a viable challenge to Pelosi.

In making his case to the Democratic caucus today, Shuler said the Democratic Party needs to be a "big tent" party. He argued that it can't take back the majority without a change in leadership, according to a Democratic aide who was in the room. Utah's Jim Matheson, a Blue Dog who argued "it's time to shake things up" in the wake of the midterm losses, nominated Shuler.

Pelosi has argued that she should remain in the leadership in part because she knows how to lead Democrats out of the political wilderness, having done so four years ago. She also argues that she is the most effective fundraiser for members of the caucus. She blames the party's losses on the country's lingering economic troubles and high unemployment rate, not her leadership.

Pressed on why she was the best person to lead the party in light of the midterm losses, she responded, "How would your ratings be if $75 million were spent against you?" She was referencing the fact that she was used in campaigns around the country this year by Republicans seeking to criticize their opponents.

"I'm the person who can attract the resources both intellectual and otherwise because I have done it before," Pelosi added.

Democratic Rep. Gene Taylor of Mississippi, who lost his reelection bid, said before the vote that Democrats would be "crazy" to reelect Pelosi. He said he would have won reelection had she not been speaker and that she was the only issue in his race. Another losing conservative Democrat, Rep. Allen Boyd of Florida, called Pelosi the face of the midterm loss.

In another continuation of the current leadership, Democrats today elected Steny Hoyer of Maryland as Democratic whip, and Rep. Jim Clyburn of South Carolina to their #3 spot. Republicans, meanwhile, voted today to keep Eric Cantor of Virginia in their #2 spot.

"This is an experienced, diverse leadership team that is very strong," Pelosi said, adding that she and her colleages "extend a hand of friendship to the Republicans."

Shuler and other Blue Dogs said following the meeting they had no plans to switch parties. Still, Shuler said following the vote, it's "very frustrating when I see everyone voting in bloc" in light of the American people's desire for bipartisan solutions.

The new Congress convenes in January.