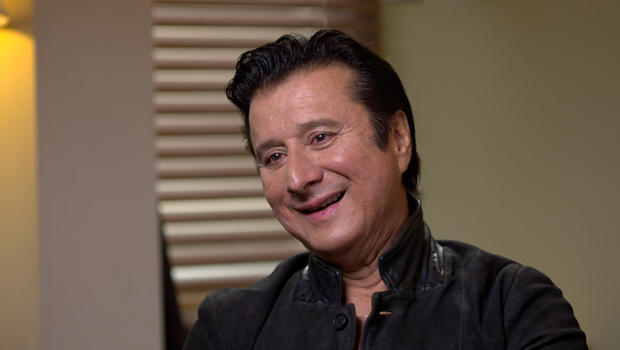 If you were alive in the 1980s (or really any time in the last 30 years), you probably know the words to at least one Journey song. And for some fans, Steve Perry is, once and forever, "the voice."

"What were you hoping for when you joined Journey?" asked correspondent Tracy Smith.

"I just wanted to write music with the guys that mattered," the 69-year-old said, "that people would love and embrace and take into their hearts. There's nothing else that meant more to me than to be part of that."

With Perry out front, the band had a slew of Top 40 hits in the '80s, and was back on a commercial roll in the '90s, when he left it all behind.

What was that like? "It was tough, really tough," he said.

"Therapy!" he laughed. "Went back to my hometown, went to the fair in the summertime that comes to Hanford."

You might understand a little more about why Perry left when you know where he came from.

Hanford, California, population 56,000, is in the heart of the Golden State's sprawling farm country. For young Steve Perry, it was the world. "When I was living here, I was really loving being here," he said.

But Perry's father left when he was seven. At Hanford's historic Fox Theatre, he talked about how it's a loss he still feels today.

There are happier memories in Hanford, too, where much has stayed the same.

Hanford's Superior Dairy has been in the same spot for nearly 90 years. And around here, they do ice cream in a big way: A single scoop is roughly the size of a cantaloupe. Sundaes are colossal … and Steve Perry is still a favorite son.

And of course they still make his favorite flavor. "It's like a milk chocolate. One bite and I'm home. That's all there is to it."

The ice cream made Perry emotional. "Excuse me for a second … It's so good.  Wow. Sorry."

Smith asked, "Is there kinda like a flood of memories and feelings?"

"I've had so many memories in this place and it's still the same. No matter what happens, no matter how successful or unsuccessful, you can always come back and have some ice cream. And it's gonna be okay."

And he was living here in Hanford when he got the call that would change his life forever.

After bouncing around a series of small-time bands, Perry joined up with Journey in 1977, and helped give the world some of its best-loved songs.

But after years of touring, he was getting tired of the grind. He was also nursing a severely injured hip, and when the band pressed him to get it fixed, he balked.

"It was really your heart, not your hip?" asked Smith

"It was my heart," he said. "It became a group decision, major surgery, and I wasn't very happy about that. So I chose to put it off and decided when to do it, and they checked out some other singers, and we went our separate ways."

In time, Journey settled on Arnel Pineda – who sounds a lot like Perry – to be their new lead singer.

And except for a few things, like the 2005 Walk of Fame ceremony, Perry stayed out of sight, and away from music.

He stopped singing.  "Completely, Tracy, I swear," he said.

"Were there moments where you thought, 'What have I done?'"

"No. I just wanted to move forward. And in moving forward, I found Kellie."

"Kellie" was psychologist Kellie Nash, whom Perry spotted in a made-for-TV movie about the impact of cancer, "Five."

They connected through mutual friends, and the sparks flew.

"And when someone who has stage 4 cancer turns to you and says, 'I love you,' you're gonna feel it for the first time, which is what happened," he said.

For a time, a new clinical trial kept Kellie alive, but in the fall of 2012 things got worse, and she and Steve had the talk that would bring him out of retirement.

Perry said, "One night she said that, 'If something was to ever happen to me, promise that you won't go back into isolation, for I think that would make this all for naught.' I had to make the promise, and I said, 'I promise.'"

Kellie Nash died in December 2012.  Perry says he mourned for two years … and then headed for the studio.

To hear Steve Perry perform "No More Cryin'," click on the video player below:

"Traces" is his first new studio album in more than 20 years – and it's a promise kept.

Smith asked, "I'm sure you think, when you're playing this music, 'What would she think of all this?'"

"I think she would love it. I really do," he replied.

"The voice" seems as strong as ever, but there aren't solid plans for a tour yet … or anything else.

"Look at you!  I can't believe you'd go – you open my heart and then you just completely, like, you know, stick a poker in there, you know?" he laughed.

"Because this is about passion, and we're talking about the same thing."

"I know. I know. I understand your question. All I can think about is where I'm at right now."

"But at least you're not closing any doors? I mean, you know there are millions, literally millions of people out there who would love to see it happen. So, I guess I'm asking from their perspective: Is the door at least still open?"

Perry said. "I love going forward. I love going to the edge of what's next. And for me, that would be a return. I have to do, at this point in my life, what really makes me feel purposeful at this moment and on the right track for me."

So yes, Steve Perry is back, but looking ahead: Happy to be making music again even if he's doing it alone.

"Look, I'm not doing this for money, honey. I don't need any money. I eat too much already! I can only drive one car at a time. This is about the passion. But maybe it took a broken heart to get there, a completely broken heart."

To hear Steve Perry perform "No Erasin'," click on the video player below: