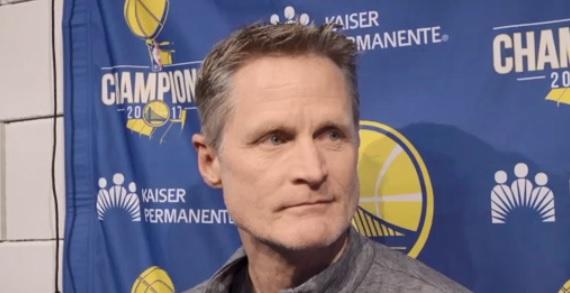 OAKLAND, Calif. -- Golden State Warriors head coach Steve Kerr has blasted the government's response to mass shootings in the wake of the massacre that unfolded at a Florida school on Wednesday. Before the Warriors played the Portland Trail Blazers Wednesday, Kerr told reporters "nothing has been done" to prevent deadly shootings from happening.

"It doesn't seem to matter to our government that children are being shot to death day after day in schools," he said. "It doesn't matter that people are being shot at a concert, in a movie theater. It's not enough, apparently, to move our leadership, our government, people that are running this country, to actually do anything. That's demoralizing."

"But we can do something about it," Kerr continued. "We can vote people in who actually have the courage to protect people's lives, and not just bow down to the NRA because they've financed their campaign for them. Hopefully we can find enough people with courage to help our citizens remain safe and focus on the real safety issues ... actually protecting us from what truly is dangerous, which is maniacs with semi-automatic weapons just slaughtering our children. It's disgusting."

This isn't the first time that Kerr has shared strong words publicly. Last September, after the Warriors had their White House invitation revoked, he wrote a letter urging President Trump to "bring us together."

Nikolas Cruz, 19, was charged Thursday with 17 counts of premeditated murder after he was questioned by state and federal authorities.

Cruz allegedly carried out the deadly attack Wednesday afternoon at Marjory Stoneman Douglas High School, killing 17 people and wounding at least 15 others. Authorities say the orphaned teenager had a troubled past.

The incident is considered the deadliest school shooting to occur in the U.S. in five years.