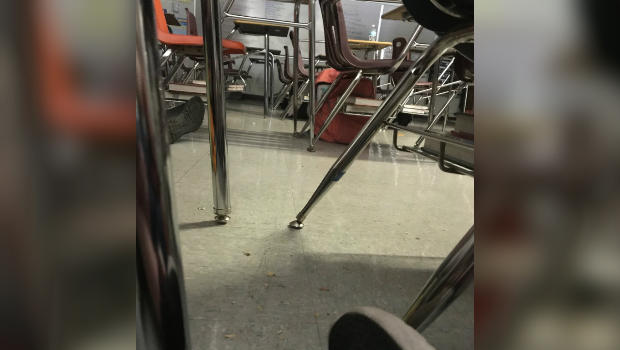 CORAL SPRINGS, Fla. -- Students barricaded themselves inside of classrooms and closets at Marjory Stoneman Douglas High School Wednesday while authorities responded to a shooting that authorities say killed at least 17 people. More than two dozen victims were hospitalized for treatment of various injuries.

Authorities secured buildings on campus and evacuated students. The school was placed on lockdown for several hours.

CBS News has confirmed 19-year-old Nikolas Cruz is the man who allegedly carried out the shooting.

Student Brandon Minoff, who was inside of the school when gunfire rang out, described the alleged shooter as "a really strange kid." Minoff told CBSN's Reena Ninan the gunman was "kicked out of two private schools" and he "was held back."

"It's the worst nightmare, not hearing my daughter for 20 minutes. The longest 20 minutes of my life," he said. "And then she texted me. I told her, 'Don't call me, I don't want anyone to hear your voice.'"

CBS Miami spoke over text message with another student at the school who is also hiding in a closet.

"All of a sudden there was a really loud noise ... people are crying the closet," the student wrote.

Another student shared an image on Twitter from inside of a classroom.

Chilling video recorded from inside a classroom captured the sound of multiple gunshots, with students screaming "oh my God, oh my God."

Student Jeiella Dodoo, who escaped from the school, shared her account of the incident with Glor.

"We were waiting and then we heard gunshots," she said. "For some students, we thought it was not that serious. One guy was like, 'Yes I did hear gunshots.' But my teacher didn't think it was. I heard about six gunshots. Some people started running. Then everyone started running. We're just gonna' run for our lives."

"I had to jump the fence. I hurt my toe but I'm fine now," Dodoo continued. "The roads were blocked. It was really scary. They made us go from across the street."

Student Noah Damiani, who left school early, told Glor his sister texted him while she was barricaded inside of the media center.

"She texted saying there was a shooting and they were in code red and she was barricaded in the media center," he said. "I know that she said they were letting her out of the back of the media center. I believe they were evacuating her. She could not stay on the phone with me though."

"She did not speak about how it started, however, I did speak with other people," he continued. "It seemed like it was a prolonged shooting."