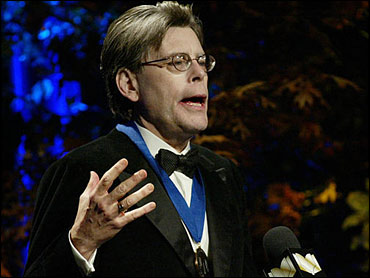 Author Shirley Hazzard won the fiction prize at the National Book Awards on Wednesday night and clashed with honorary winner Stephen King who urged the audience to pay more attention to writers like himself.

Other winners included Carlos Eire, who received the nonfiction prize for "Waiting for Snow in Havana"; Polly Horvath, winner in the young people's category for "The Canning Season"; and C.K. Williams, the poetry winner for "The Singing."

Hazzard was cited for her novel "The Great Fire," a romance set just after World War II. Each winner received $10,000. Finalists got $1,000.

Although critic Harold Bloom and others criticized King's selection, the 56-year-old author received a standing ovation as he walked stiffly to the stage, four years after being struck by a van while walking near his home in Lovell, Maine.

Author of "Carrie," "The Shining" and many other best sellers, King urged that the gap be closed between "the so-called popular fiction and the so-called literary fiction."

King acknowledged that some thought him unworthy of the honorary prize, with previous winners including such critical favorites as Philip Roth and Arthur Miller. But he said had no patience "for those who make a point of pride in saying they have never read anything by John Grisham, Tom Clancy, Mary Higgins Clark or any other popular writer."

"What do you think?" King asked. "You get social academic brownie points for deliberately staying out of touch with your own culture?"

But while King and Hazzard both celebrated the diversity of literature, you couldn't ask for two more different writers. King has written dozens of novels. Before "The Great Fire," Hazzard had not completed a work of fiction since the early 1980s. King was an early champion of the e-book. Hazzard writes in longhand and does not own a television or even an answering machine.

And she has never read a Stephen King book.

"I just haven't had time to get around to one," she told The Associated Press, citing Shakespeare and Joseph Conrad as authors she's currently reading.

Earlier, she told the audience, responding to King's call to read popular writers: "I don't think giving us a reading list of those who are most read at this moment is much of a satisfaction."

Just about everyone Wednesday seemed to have a point to make. Eire noted that he could have never published his book, a memoir about growing up in Cuba and his departure after the rise of Fidel Castro, back in his home country. The head judge for the young people's prize, Susan Campbell Bartoletti, said the boundaries between children's literature and books for grown-ups were breaking down. Mystery writer Walter Mosley, who hosted the ceremony, had special praise for the poetry finalists.

"Without our poets, we really don't have a heart," he said.

The awards, now in their 54th year, were sponsored by the National Book Foundation, a nonprofit organization that charged a $1,000 a seat to fund its educational programs. A lot of those seats were purchased by King, who bought up five tables, at $12,000 a table.