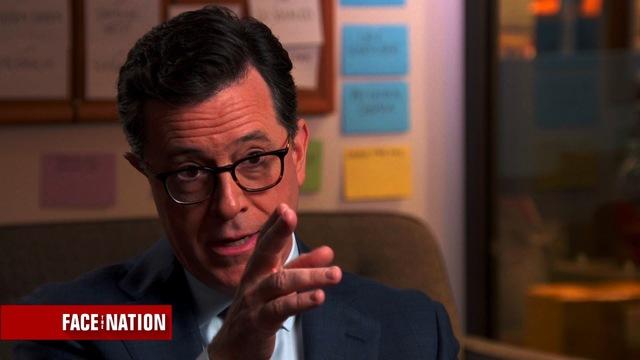 He’s the very public face of a television broadcast that regularly draws millions of viewers every weekday night - can you blame him for being a bit of a superstitious performer?

Stephen Colbert, the host of the “Late Show,” described his pre-show ritual in a recent, wide-ranging interview with “Face the Nation” moderator John Dickerson.

“I come out of rewrite,” Colbert began. “One of my guys, if he’s in the room, says, ‘Squeeze out some sunshine.’ And then I see one of my [production assistants]. She shakes both of my hands, she tells me where every guest is, if they’re there, as we walk upstairs.”

“I don’t talk to anybody in the little airlock before we go onstage,” Colbert added.

Onstage, he continued, “I shake all my sound guys’ hands, all the electrics’ hands…I don’t shake my stage manager’s hand. We just don’t do that. It’s evolved over the years. I have one Altoid, just a little sugar and just so my coffee breath doesn’t get my guests.”

And then, a wakeup call of sorts.

“I stand in place. I slap myself in the face hard, twice. Hard enough to regret it,” Colbert said. “Once isn’t enough. Both times, you have to slap yourself hard enough to go, ‘I would not want a stranger to hit me that hard.’ So I’ll wake up… ‘cause you only have one chance to do the show.”

“And then I make eye contact with [band leader] Jon Batiste. And when he sees me, he introduces me to the audience,” Colbert said. “And then I come out, and then I say the same thing to the audience, most nights, because it lets me know if they’re paying attention. Because they’re all jokes and I know what level of response they get. And I can gauge the audience without ever having told a joke on the show, as to how much I have to work tonight.”

For more of our interview with Colbert, click here.