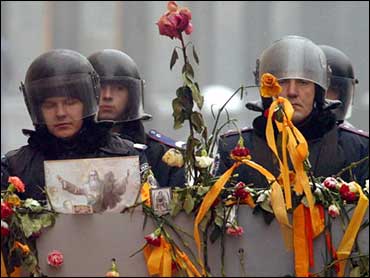 Opposition leader Viktor Yushchenko, who claims he was cheated of victory through fraud in Ukraine's Nov. 21 presidential runoff, urged his supporters to stay in the streets of Kiev.

However, outgoing President Leonid Kuchma on Sunday called on Ukraine's political opposition to end a blockade of government buildings by hundreds of thousands of supporters jamming the snowy streets of the capital, and said compromise is needed to solve a weeklong political crisis over a disputed presidential vote.

"Compromise is the only way to avoid unpredictable consequences," Kuchma said at a meeting of his National Security Council, parts of which were broadcast live on Ukrainian television.

Representatives of Yushchenko and the other candidate claiming victory — Prime Minister Viktor Yanukovych, who has the backing of Kuchma and the Kremlin — had expected to meet around a negotiating table. But a Yanukovych aide said that no talks had taken place Sunday.

Aide Stepan Havrysh said Yanukovych's campaign was upset by the Ukrainian parliament's decision Saturday to declare the election invalid and to pass a vote of no-confidence in the Central Election Commission.

Yanukovych's campaign claimed that no talks had taken place Saturday, either, but the Yushchenko team said the eight members — four representatives on each side — had met.

Hundreds of thousands of Yushchenko supporters have thronged downtown Kiev, decked out in his campaign's orange colors, for a week. Starting Thursday, they encircled the Cabinet and the president's administration buildings, refusing to let anyone enter or leave.

Kuchma called the blockades a "gross violation of law."

"You know well that it would be unacceptable in any nation," he said.

Yushchenko, addressing tens of thousands of supporters in and around Independence Square, urged the crowds to maintain their vigil.

"You will ask me how long we should stay here, is it worth staying here?" he said. "Even the Georgian revolution lasted for three weeks. ... I am asking you, I am demanding that you stay here until the end."

Last November, massive street protests in the ex-Soviet republic of Georgia helped lead to the resignation of longtime President Eduard Shevardnadze — and have become a source of inspiration for many of the Ukrainian demonstrators.

Saturday's parliamentary declaration — approved by 255 of the 429 legislators present — was not legally binding, but it was a clear demonstration of rising dissatisfaction with an election international observers said was marred by fraud. Kuchma acknowledged the parliamentary vote, but emphasized that it was a "political decision."

The opposition, however, saw it is a big boost to their fight.

Parliament also passed a vote of no-confidence in the Central Election Commission, which declared Russian-backed Yanukovych the winner.

Yushchenko has demanded a revote on Dec. 12 observed by the Organization for Security and Cooperation in Europe. He has also demanded that the current 15-member Central Election Commission be replaced.

The crisis has exacerbated the stark divide between the pro-Russian, heavily industrialized eastern half of Ukraine, where Yanukovych draws his support, and the west, Yushchenko's stronghold including the capital Kiev, which is a traditional center of Ukrainian nationalism.

Yanukovych's Party of Regions brought together 3,500 delegates from 17 eastern and southern Ukrainian regions for an urgent session Sunday in the town of Severodonetsk to discuss autonomy for much of eastern Ukraine. Yanukovych and Moscow Mayor Yuri Luzhkov attended the session.

"On the one hand, we see the sabbath of witches who have been fattened up with oranges and who pretend that they represent the whole of the nation, on the other hand we see the peaceful power of constructive forces that has gathered in this hall," Luzhkov said in comments broadcast on Russia's NTV television.

Borys Kolesnikov, the head of the Donetsk region and a key ally of the prime minister, warned that a Yushchenko presidency "would prompt the establishment of a new federal state in the form of a southeastern republic with its capital in Kharkiv," close to the Russian border.

Yanukovych has said he will honor all decisions made at a session in Severodonetsk, the Interfax news agency reported.

Yushchenko told his supporters that the opposition-formed National Salvation Committee — a parallel government — intended to open criminal cases against the governors of the eastern regions of Kharkiv, Donetsk and Luhansk in connection with separatism. But he also called for "productive dialogue" with Russia.

"We aren't going to choose only one side — Europe or Russia," Yushchenko told his supporters.

Russia and the West are at odds over the political stalemate in Ukraine. Russian President Vladimir Putin openly backed Yanukovych and congratulated him on his victory, while many Western nations, including the United States, say they don't recognize the vote results.

Yushchenko, whose wife is U.S.-born, says he wants to push the country to greater integration with Western Europe. His critics worry he will alienate Ukraine from Russia, its key trade partner and main energy supplier. Yanukovych was expected to pursue closer ties with Moscow.