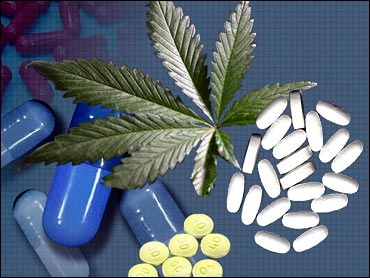 There are worse things you can do for money than stay off drugs.

"And I've done them, too," chuckled Allen Price, a 43-year-old methamphetamine addict from Oakland, Calif.

So when a friend told him about a 12-week program in San Francisco that would pay him up to $40 per week just to stay clean, he decided it was just what he needed.

For five weeks since, he has trekked to a clinic several times a week to submit a urine sample, and pick up a few dollars for testing negative.

"What appealed to me was the positiveness of it," he said. "It is a motivation. Stay off drugs and get some benefits out of it. Why not give it a try?"

The idea of paying people to stay clean has caught on around the country amid a growing body of research indicating the practice can help keep addicts off drugs.

Smokers in a two-year study at the University of Florida can get vouchers redeemable at Target, Wal-Mart or Amazon.com if they pass a test on whether they have had a cigarette.

A study of 415 cocaine and methamphetamine users published last October in the Archives of General Psychiatry found that they stayed in treatment longer if they had a chance to win a prize.

Dr. Lisa A. Marsch, a researcher with the National Development and Research Institutes, runs a program at St. Luke's-Roosevelt Hospital Center in New York that offers teenagers medication, counseling and reward vouchers for testing clean for drugs like heroin.

"It can be a very powerful technique," she said. "If it increases their motivation to stay clean even a little, it's worth doing."

Teens in Marsch's program must submit three urine samples a week. Pass, and the patient gets a voucher that can be used to buy something. The amounts start small but rise with every clean result. The second test might be worth $3.75, the third, $5. A person who remains drug-free for two months could earn as much as $596 in all.

You can't buy cigarettes or alcohol with the vouchers. But almost anything else is OK — sneakers, CDs, an iPod. The catch is, if the patient tests positive, his or her next clean sample will be worth only the minimum, or $2.50.

If past research is a guide, teens getting the vouchers will stay clean at rates roughly 20 percent to 30 percent higher than if they had counseling and medication alone, Marsch said.

"At first, it's sort of like, `Yeah, yeah. Whatever,"' said Jessica, who participated in a program coordinated by Marsch in Burlington, Vt., when she was 18, and agreed to be interviewed on the condition that only her first name be used.

"But once we got going, it was kind of nice to be rewarded for doing something good," she said. "Growing up, I didn't have the best family life. I wasn't used to that extra pat on the back."

Over time, she earned enough to pay off some bills and buy a CD player.

Nancy Petry, a researcher at the University of Connecticut School of Medicine, conducted several studies in which a clean urine sample earned addicts a dip into a bowl filled with slips for various prizes — a bus token, a pair of socks, new dishes, movie tickets. And somewhere in the bowl was a jumbo prize worth about $100.

"It turned out to be a big incentive," Petry said of her experiments, which have involved about 1,000 people.

Typically, only 20 percent to 30 percent of patients might complete a full 12-week treatment course without failing a test, but with the prize system in place, that rate improved to between 40 percent and 60 percent, Petry said.

It is unclear how successful such programs are in the long term. Almost all patients eventually have at least one relapse.

Jessica, now 21, stayed sober for seven months after completing Marsch's program but slipped hard once it ended. Within a few years, she had moved on to heroin.

Her latest treatment program, in which she takes methadone and attends Narcotics Anonymous meetings twice daily, has her feeling optimistic. She has been clean for a month.

"I feel like I'm on the right track," she said.
By David B. Caruso