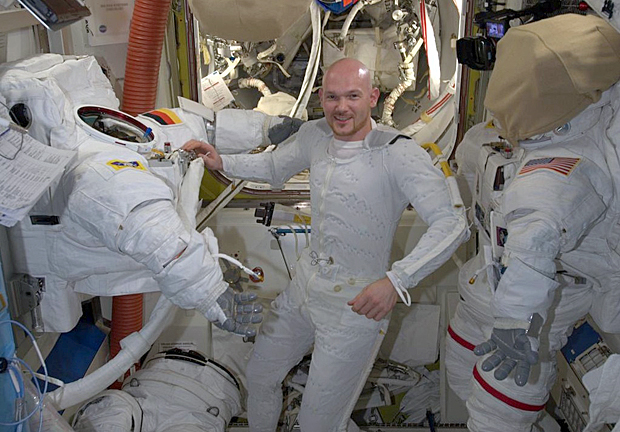 Space station astronauts will venture outside the complex Tuesday and again next week to move a failed ammonia pump to a more secure storage location, to replace an electrical component that will restore one of the lab's solar power channels to normal operation and to carry out a variety of "get-ahead" maintenance tasks.

The two U.S. spacewalks will set the stage for a complex series of eight to 10 NASA spacewalks and module relocations next year that are needed to prepare the station for dockings by Boeing and SpaceX commercial crew ferry craft.

Two commercial crew docking adapters will be installed, one on the front end of the forward Harmony module where shuttles once docked and the other on the module's upper space-facing port. Harmony's Earth-facing port will remain available for use by visiting cargo ships.

A pressurized storage module now attached to the Earth-facing port of the central Unity module will be moved to the forward side of the Tranquility compartment where the multi-window cupola is located, making way for equipment that will enable visiting cargo ships berth at Unity.

The relocations will be carried out remotely using the station's robot arm, but multiple spacewalks will be needed to route and re-route power and data cables and to install a universal communications and navigation system that will be used by Boeing and SpaceX crew craft during station approaches and departures.

When the work is complete, the U.S. segment of the station will be able to accommodate two commercial crew vehicles and two cargo ships at the same time, providing fully independent access to the lab complex for the first time since the space shuttle's retirement in 2011.

"When you look out a little further as to how the EVAs stack up after the first of the year and out into the spring, we're really going to start this transformation of the space station," said Kenny Todd, space station integration and operations manager. "We're going to be doing the things we need to do on these EVAs to prep for moving some modules around.

"All that is in preparation for being able to support future commercial crewed vehicles coming to station. We're trying to get out in front of that. We'll be prepping for moving modules, we'll be installing a new docking adapter system. All of that will be happening throughout the next several months."

But first, NASA is staging a pair of spacewalks to complete unfinished business, to restore an electrical power channel to normal operation and to move camera lights and equipment needed for the upcoming commercial crew reconfiguration.

Flight engineer Reid Wiseman and European Space Agency astronaut Alexander Gerst plan to kick off the first spacewalk, U.S. EVA-27, at 8:10 a.m. EDT (GMT-4) Tuesday, exiting the Quest airlock module and making their way to the forward face of the station's solar power truss where the pump module is mounted on a robot arm transporter.

A valve in the pump module failed last December, prompting two spacewalks later that month to install a replacement. The swap out was successful, but it took longer than expected and the crew did not have time to move the old pump back to an external storage platform as originally planned. Gerst, riding the station's robot arm, and Wiseman will complete the pump relocation on Tuesday.

The astronauts also will replace an external video camera light and install electrical components and wiring to route power to equipment on the mobile transporter in case of problems that might prevent the transporter from plugging into power at work sites along the truss.

The spacewalk, the 182nd since station assembly began in 1998, is expected to last about six-and-a-half hours.

Assuming all of that goes well, Wiseman and astronaut Barry "Butch" Wilmore will venture outside for U.S. EVA-28 a week from Wednesday, on Oct. 15, to replace a device known as a sequential shunt unit, or SSU, on the far right end of the station's solar power truss.

The space station is equipped with eight large solar panels that rotate to track the sun, providing power to eight distribution channels. Each array is equipped with an SSU to provide voltage regulation, balancing loads with demand. The SSU in power channel 3A failed last May, forcing flight controllers to re-route power from another channel to a variety of components.

Because the circuitry is electrically "hot" when the station is in sunlight, Wiseman and Wilmore will time their spacewalk to remove and replace the faulty SSU during a night pass when the arrays are not generating power.

Once that work is complete, the astronauts will relocate a spacewalk foot restraint, repair a camera on the left-side of the solar power truss and move another television camera assembly from the top of the port-1 truss segment to the upper side of the forward Harmony module.

Two Russian cosmonauts -- station commander Maxim Suraev and Alexander Samokutyaev -- plan a spacewalk of their own on Oct. 22, but that excursion will be devoted to routine maintenance and experiment swap outs and is not related to NASA's activity.

For NASA, the space station reconfiguration work begins in earnest in January when Wilmore and Terry Virts, scheduled for launch to the station aboard a Russian Soyuz spacecraft in November, will carry out a pair of spacewalks kicking off a complex sequence of EVAs needed to ready the station for the arrival of commercial crew spacecraft starting in 2017.

NASA plans to launch two international docking adapters, or IDAs, to the space station aboard SpaceX Dragon cargo ships, one in late spring or early summer and the other at the end of the year. Using the station's robot arm, one of the IDAs will be installed on pressurized mating adapter No. 2, attached to the forward port of the Harmony module where space shuttle's once docked.

Before that happens, however, a pressurized storage module attached to Unity's Earth-facing port during the final shuttle mission will be moved to Tranquility's forward port to make way for installation of equipment needed for commercial cargo ships to berth at Unity. A second cargo port will remain available at Harmony's Earth-facing port.

Up to 10 spacewalks are expected next year to route electrical cables, ethernet cables, move cameras and mount the Common Communications for Visiting Vehicles, or C2V2, equipment that will be used by approaching commercial crew spacecraft for station communications and close-in navigation.

Astronaut Scott Kelly, scheduled for launch to the station next March for a planned year-long stay, is expected to participate in four to six of those EVAs.