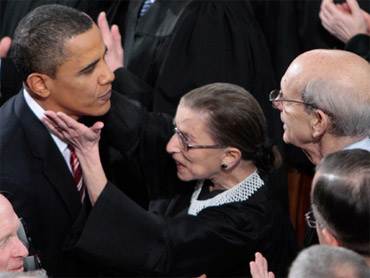 This article was written by Pejman Yousefzadeh of The New Ledger.


It is difficult to catalog just how many contradictions there were in the President's State of the Union address. A President calling for bipartisanship and an end to the permanent campaign gave a speech that was-in tone and in substance-a campaign speech. A President calling for unity gave a speech that practically cried out "all the bad stuff that happened was George W. Bush's fault!" A President calling for a renewal of national purpose spent large amounts of time playing class warfare games, and seeking to turn Americans against Wall Street. That latter activity is an easy one to engage in. But just because something is easy, does not make it right.

Above all else, the contradiction most clear in the President's speech was his pretense to a renewed bout of listening to the American people, while at the same time presenting a domestic policy program that seemed to have been crafted before the poll numbers of the President and his party went south, and before Massachusetts elected a Republican to fill the seat once held by Ted Kennedy. Yes, it is good that the President is proposing that we eliminate capital gains taxes on small business investment.

But that doesn't make up for the tax that he wants to impose on banks, simply because banks are not popular these days, and despite the fact that many banks have repaid the emergency loans that they got, with interest, and that many of the banks affected by the proposed imposition of the President's new tax never took bailout money in the first place. Yes, it is good that he is advocating an expansion of charter schools. But that doesn't make up for the fact that Democrats-under President Obama's watch, and with his approval-killed the D.C. school choice program because they placed teacher union interests over those of parents and schoolchildren.

Much time was spent by the President patting himself, and his Administration on the back for the stimulus bill passed last year. However, the stimulus bill has done little to influence the state of the economy for the better; even proponents of the stimulus package are forced to recognize that most of the stimulus money that went out to ordinary Americans got used for bill-paying (thus defeating the purpose of actual stimulus, and that the actual "shovel-ready" projects will not come around until next year, which means that we may well have engaged in stimulus spending that was entirely unnecessary, seeing as how the economy may recover on its own by 2011 without stimulus funds. Stimulus spending is supposed to impact the economy while the economy is still suffering a downturn. Once the economy has recovered, there is no need whatsoever for stimulus spending; in that circumstance, all that is accomplished by such spending is an increase in the federal budget deficit.

The most blatant example of the President pretending to hear the American people, while not doing so, came with the discussion of health care reform. Despite the fact that the national mood has turned quite decisively against the President's program, and despite the victory in Massachusetts(!) of a senatorial candidate who ran promising to stop the Democrats' vision of health care reform, the President acted as though nothing had changed politically, and did not give even the slightest amount of lip service to Republican ideas on health care reform-ideas like purchasing health insurance across state lines, or introducing tort reform, which if included in a health care bill, could have given that bill the bipartisan support necessary for passage.

Perhaps one of the worst instances of demagoguery came with the following passage:

". . . Last week, the Supreme Court reversed a century of law to open the floodgates for special interests - including foreign corporations - to spend without limit in our elections. Well I don't think American elections should be bankrolled by America's most powerful interests, or worse, by foreign entities. They should be decided by the American people, and that's why I'm urging Democrats and Republicans to pass a bill that helps to right this wrong."

This argument is not even close to being true, and it is more than a little embarrassing that a law lecturer who once taught at one of the nation's elite law schools should so thoroughly have botched the description of a Supreme Court ruling. No law professor worth his or her salt would have accepted from a student so misleading a statement about the Citizens United ruling as Barack Obama gave to the country. Justice Alito's dismay concerning the President's demagoguery was entirely justified.

The President's speech did not lack statements with which I could agree, and I don't want to cause people to think otherwise. But at the end of it, I was struck by the fact that what Barack Obama said about TV pundits could apply to his own rhetoric. According to the President, these pundits "reduce serious debates into silly arguments, and big issues into sound bites," and as a consequence, "our citizens turn away." If the President wonders why so many of the American people have soured on his leadership, a little over a year after he took office, he need not look further than his own speech for the explanation.

By Pejman Yousefzadeh:
Reprinted with permission from The New Ledger.