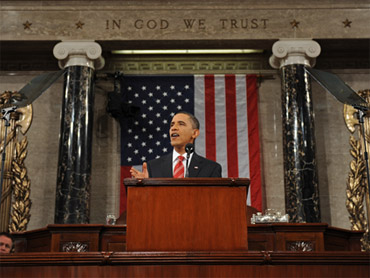 With an unemployment rate stubbornly stuck above 9 percent, President Barack Obama says the main theme of his State of the Union speech Tuesday will be creating jobs.

In fact, in his weekly radio and Internet address and in a video message to supporters this weekend, Mr. Obama used the "jobs" 18 times, notes CBS News chief White House correspondent Chip Reid.

"So my principal focus, my number one focus, is going be making sure that we are competitive, that we are growing, and we are creating jobs not just now but well into the future," he said in the video message e-mailed to his 2008 campaign supporters.

"These are big challenges that are in front of us. But we are up to it as long as we come together as a people, Republicans, Democrats and Independents," said the president.

Getting support from Republicans who won back control of the House and increased their numbers in the Senate last November, won't be easy - especially when it comes to any new spending.

On "Fox News Sunday," Senate Minority Leader Mitch McConnell said, "This is not a time to be looking at pumping up government spending in very many areas."

But CBS News political analyst John Dickerson says the president will not use the speech to get into specifics.

"These State of the Union addresses can get boring and turn into long laundry lists, and the White House sees this one a little bit differently," Dickerson said on "The Early Show."

"There will be specifics about education and investment, and the president will talk a lot about growth, arguing that America is at a turning point here in the global competition against countries like China and India, and that America has to invest. He'll also talk a great deal about cutting spending.

"But it's going to be more thematic," Dickerson said, "as sort of an opening argument for the next two years, rather than a long list of specifics from the president."

Rep. Paul Ryan, the Republicans' point person on the budget, will be offering the GOP response to the State of the Union address. But he may not present many specifics, either, on how to cut government spending.

"The Republicans don't lack for specifics; the problem for the Republican leaders is just picking which specifics to sign on to," said Dickerson. "A group of conservative Republicans put out a plan last week cutting $2.5 trillion in ten years - some big cuts, cutting the government spending back to about 2006 levels. Paul Ryan has a big plan that would shrink the budget deficit.

"Problem is, is that Republicans won't sign on to [them], and Republican leaders are nervous about big, big fast cuts because it's just too fast."

And with raising taxes anathema to the GOP, the party may have to forgo tax breaks in order to make up the difference. In this morning's Washington Post, Shailagh Murray and Lori Montgomery write, "Despite their opposition to raising taxes, Republicans have conceded some cherished [tax] deductions, such as the one that allows homeowners to deduct the interest on their mortgages, may have to go."

Do political leaders really have the stomach to cut what is arguably one of the most popular tax breaks for the middle class?

"That's enough to make you choke on your coffee this early in the morning," said Dickerson of the prospect lawmakers would kill what is arguably one of the most popular tax breaks for the middle class, for which about $131 billion a year goes to about 30 percent of taxpayers that own homes. "But what will probably happen, if such a deal were ever to come about, is that it would probably be for houses that were, say, over $1 million.

"And also, there would be a tradeoff, so that people would no longer be able to deduct all of their mortgage interest, but their rate on their income would go down, so there would be some kind of tradeoff in order for such a thing to pass."

One tradeoff that will be apparent at Tuesday's address will be in seating.

Typically, Republicans sit on one side of the chamber, Democrats on the other. But in the wake of the tragic shooting in Tucson, this year members from opposite sides of the aisle will sit together, trying to express a tone of more unity.

"I think if Coburn and Schumer can sit next to each other, then probably just about everybody can," "And I would urge others to do it. "

Among the guests at the State of the Union address will members of the medical team tending to Rep. Gabrielle Giffords, and hero intern Daniel Hernandez, who is credited with having helped save the congresswoman's life.