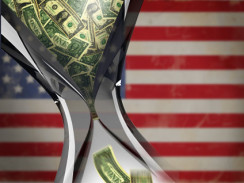 The Republican Study Committee (RSC), a group of 165 conservative members of the House, released a proposed set of federal budget cuts that they say would reduce federal spending by $2.5 trillion over the next decade. Predictably, conservative political commentators have welcomed the proposal, while those on the left are furious at the plan, which lays out dozens of programs to slash. Both sides, however, are taking a critical eye to what the proposal left out.

The RSC has proposed $330 billion worth of cuts to a long list of government-subsidized entities, including Medicaid, the Department of Energy and the National Endowment for the Arts, to name a few. The proposed "Spending Reduction Act of 2011" also finds $1 billion in savings by eliminating funding for "Obamacare administrative costs."

Most of its savings, however, would come from cutting non-security discretionary spending (this exempts Medicare, Social Security and the Pentagon) to 2006 levels through 2021, starting in the 2012 fiscal year. It also calls for reducing non-security discretionary spending to 2008 levels for the rest of 2011, which would amount to $80 billion in cuts. These spending cuts are left unspecified.

Ed Morrissey of the conservative blog Hot Air said Republicans will "certainly score some points" for their proposals, but he suggested the plan doesn't go far enough.

"It makes a great start on deficit reduction -- but only a start, and really only an appetizer," he wrote. "The main drivers of deficit spending are Social Security, Medicare, Medicaid, and other mandatory spending on entitlements. Even if Democrats agreed to these cuts, Congress would have to raise the debt ceiling by a significant amount to allow Treasury to sell bonds to fill the gap."

Philip Klein of the conservative American Spectator similarly had a positive response to the plan but was skeptical of its exemption for entitlements, as well as the lack of specifics on cutting "non-security discretionary spending."

"At first blush, I don't see anything in the above list that would not be worthwhile to cut," he wrote. "The problem with relying on spending freezes is that you still have to figure out down the road where the actual savings are coming from, especially as time goes by and inflation makes it more challenging to meet those annual spending targets. And as we know, we won't get the long-term debt under control without a serious effort to reform entitlements."

On the other side, Pat Garofalo of the liberal blog Think Progress suggested that bringing the federal budget down to 2006 levels would mean cutting a "bevy of vital and popular programs."

"Such a cut would mean significant reductions in Pell Grants, federal highway funding, the National Park Service, federal education funding, cancer research, Immigration and Customs Enforcement, the Drug Enforcement Administration, the FBI, the Coast Guard, and the Secret Service," he writes. "It's a real problem that Republicans believe randomly choosing a year in which federal spending was lower in total dollars, and asserting that we should just go back to that, is a responsible and effective way to budget."

(Incidentally, Dick Armey and Matt Kibbe of FreedomWorks, the conservative group that has in large part facilitated the growth of the Tea Party movement, recently proposed cutting ethanol subsidies and defense spending along with a bevy of other programs in a Wall Street Journal op-ed published earlier this week.)

Roberts writes that the proposal "might as well be called the Thumbing Liberals In the Eye Act of 2011. It's a laundry list of targets conservatives have been after for decades, most of which will make no appreciable difference to the nation's fiscal health."

The group's chair, Rep. Jim Jordan of Ohio insisted yesterday that cutting federal spending will create jobs, but a number of liberal commentators have said the plan would lead to significant job losses.

"The most important detail about a plan such as this one: it would be devastating for American jobs," Steve Benen of the Washington Monthly wrote. "Indeed, if lawmakers were to get together to plot how Congress could deliberately increase unemployment, their plan would look an awful lot like this one. The RSC proposal would deliberately fire thousands of civilian workers, force states to make sweeping job cuts, and lay off thousands more who work in transportation and infrastructure."

Republican leaders in the House yesterday were vague about whether they supported the plan.

"Our immediate goal to cut spending to pre-bailout, pre-stimulus levels," Michael Steel, a spokesman for House Speaker John Boehner said, the Hill reports. "That's what we pledged, and that's what we'll fight for. But that will be the beginning, not the end, of our efforts to cut spending and create jobs - and the Speaker appreciates every member's input."