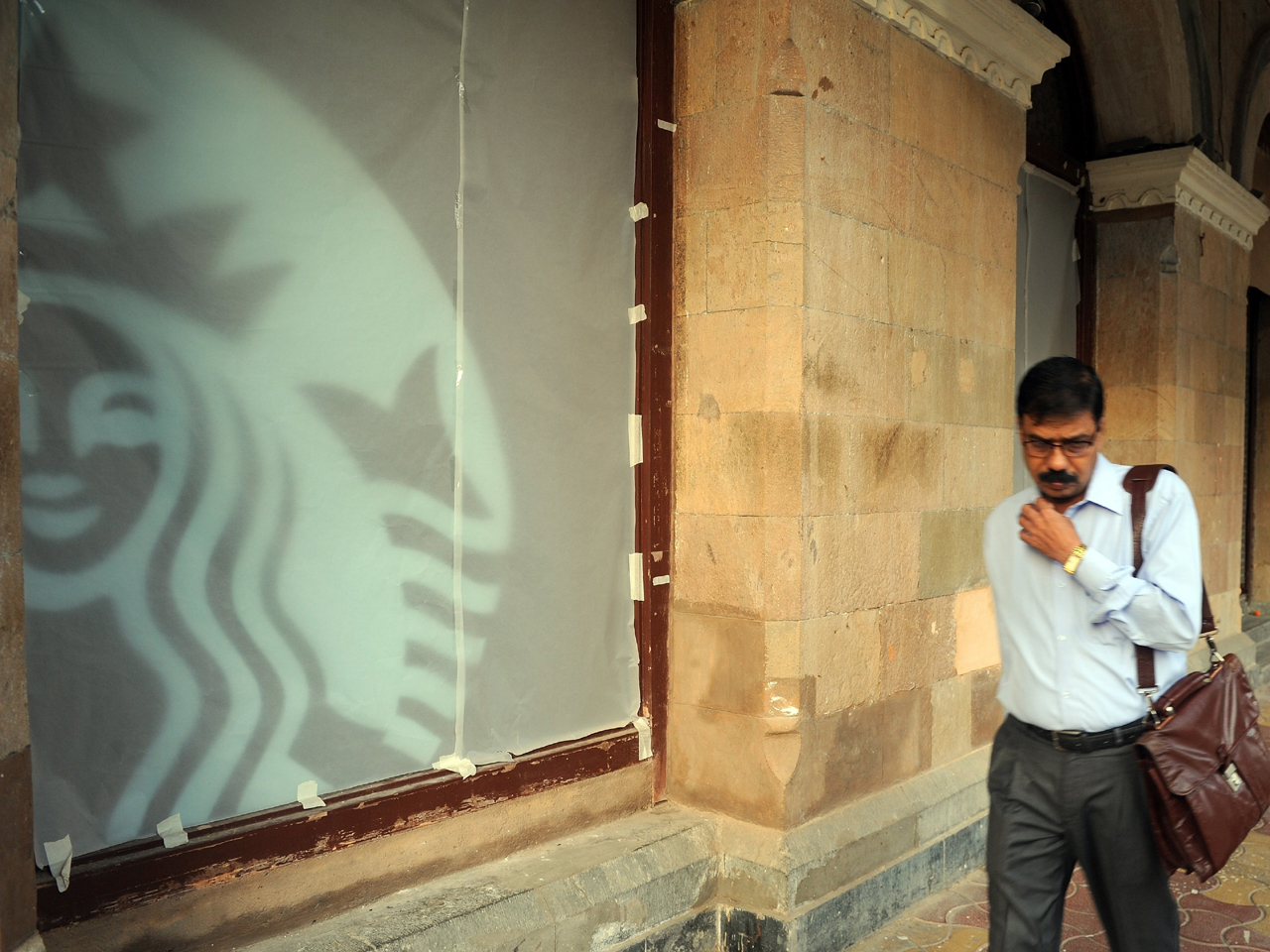 MUMBAI, India Starbucks (SBUX) inaugurated its first store in India Friday in a historic building in southern Mumbai as the Seattle-based coffee giant seeks growth in a market long associated with tea drinkers.

"It is perhaps the most elegant, beautiful, dynamic store we've opened in our history," chief executive Howard Schultz said in an interview.

After over six years of studying the local market, Starbucks is making a rapid-fire entry into Asia's third-largest economy. Coffee houses are still a relatively new trend in India, and the chains already in business sell cappuccinos and lattes well below Starbucks' usual prices.

The company, in a joint venture with Tata Global Beverages, plans to open two additional stores in Mumbai next week -- on Wednesday in the Taj Mahal Palace hotel and on Thursday in the Oberoi hotel across town -- before launching in New Delhi early next year.

For the flagship Mumbai store, Starbucks chose the historic Elphinstone Building in the Horniman Circle neighborhood of south Mumbai, not far from a vast Hermes shop and a stately local park maintained with funds from the family foundation of Italian designer Ermenegildo Zegna.

Schultz said he hoped the effect would be like "walking into a shrine of Starbucks coffee."

The shop will offer free Wi-Fi and stay open until 11 p.m. Monday through Thursday and 1 a.m. on weekends, unusually late for Mumbai cafes.

The 42 menu items reflect local as well as Western tastes, featuring items such as Elaichi Mawa croissants - made with cardamom and milk solids - and tandoori paneer rolls.

The prices position Starbucks at the premium end of India's coffee cafes, with a 12 ounce cappuccino retailing for a little over $2.

"We've been trying to in a sense crack the code here," Schultz said. The company decided early on they needed to enter India with a local partner, as they did in China. Schultz said he spoke with many interested parties, but none "had the complete suite of things we felt were necessary to build a big, enduring business. That changed the day we met Tata."

Schultz came to India in November 2010 to begin "substantive conversations" with the salt-to-SUVs Tata conglomerate, which were followed by meetings in Seattle and a January 2011 coffee sourcing agreement with Tata Coffee. A year later, Starbucks announced it had formed a 50-50 joint venture with Tata Global Beverages called Tata Starbucks Ltd. At the time, the vice chairman of Tata Global Beverages, R.K. Krishnakumar, said the joint venture hoped to open 50 stores by the end of 2012 -- a statement Starbucks has since tried to distance itself from.

The company won't comment on expansion targets, but Schultz pointed to Starbucks' presence in other markets as examples of the scale he is interested in. There are more than 700 outlets in mainland China, he said, and 1,000 in Japan. While those numbers are dwarfed by the over 10,000 outlets in the United States, Asia has emerged as a key driver of growth.

"Asia and the entire Pacific Rim present one of the most significant growth opportunities within Starbucks Coffee Company," Schultz said. "India is at the core, along with China."

Starbucks said in April that China - where it opened an average of one store every four days during fiscal year 2011 - will likely be its second-largest market by 2014.

The partnership with Tata has brought Starbucks access to some prime real estate for its outlets. The Elphinstone Building, for example, is owned by Tata Sons, the holding company that controls the Tata Group. The Taj Mahal hotel, site of the second shop, is also a Tata property.

It has also enabled Starbucks to enter a market with a locally grown and roasted espresso for the first time. The "Indian Espresso Roast" is sourced through an agreement with Tata Coffee, a sister company to Tata Global Beverages.

Unlike Europe, where Starbucks has foundered on entrenched cafe cultures, India is full of young people looking for an unintimidating place to hang out, away from the prying eyes and cramped quarters of home.

Retail consultancy Technopak Advisors predicted India's $230 million cafe market will swell to $410 million by 2017, with the number of cafes rising from 1,950 to 2,900 in the next five years, in a report released Thursday.

Cafe Coffee Day, which is owned by an Indian coffee conglomerate based in the southern city of Bangalore, has around 1,350 outlets and is the current market leader. A host of international players, like Gloria Jean's, Costa Coffee and Coffee Bean & Tea Leaf, are already scrambling to catch up. Dunkin' Donuts also debuted this year, opening five stores in the year through September, according to Technopak.