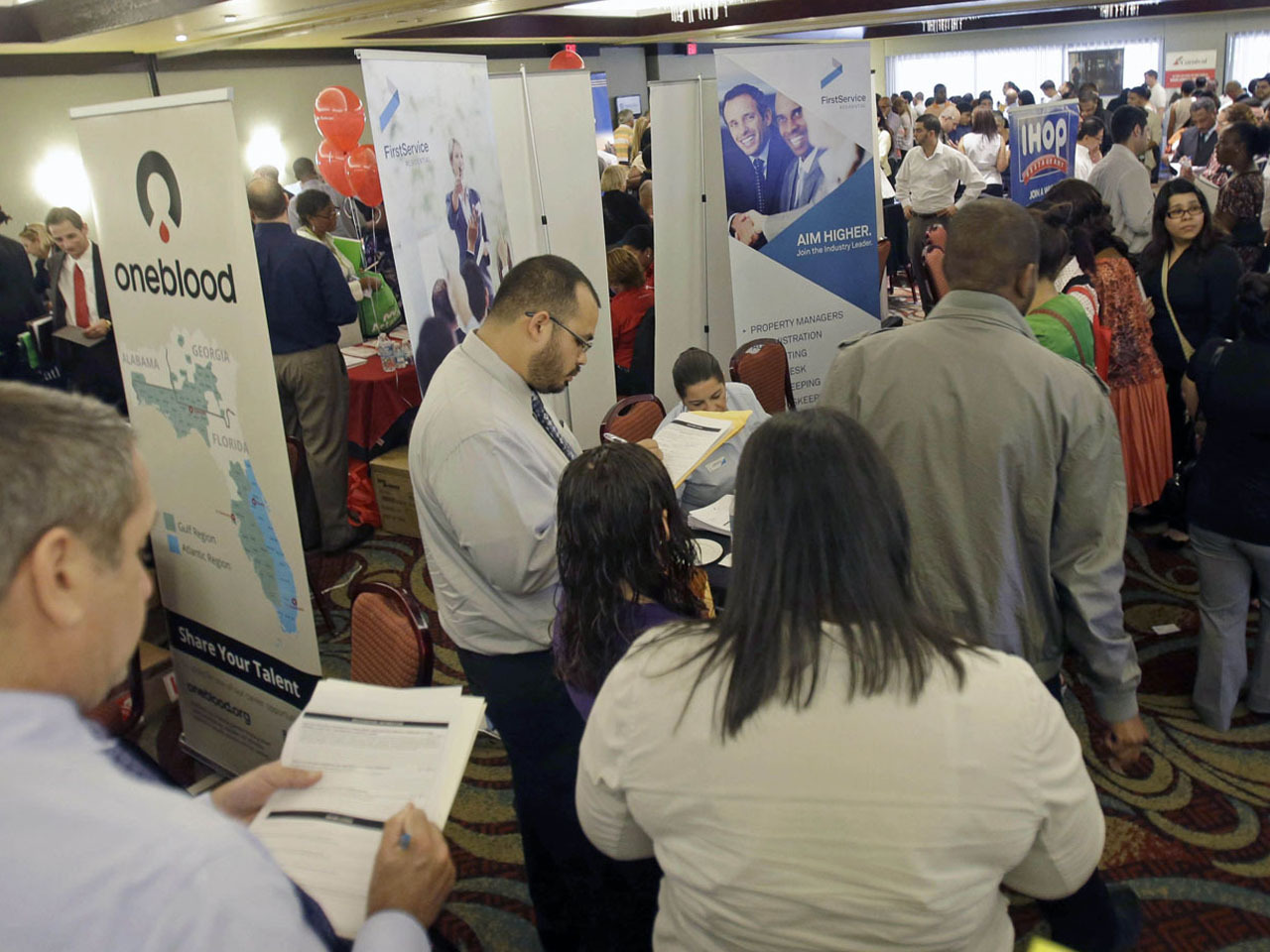 (MoneyWatch) It is a tiny number, but it looms large in explaining the lackluster economic recovery. Workers' average hourly earnings in September rose a meager 0.1 percent, according to this week's government employment report. For the typical employee, that amounts to 24 cents per day.

Who's ready to fire up the credit card?

That is not an incidental question in a country where consumer spending accounts for more than two-thirds of economic activity -- especially with American consumers being counted on to lift the economy even as fiscal policy remains blocked in Washington and the Federal Reserve runs low on ammo in trying to boost growth.

Meanwhile, the reality is that wages and compensation have been stagnant for decades, a consequence of rising income inequality, globalization, declining union membership, widening poverty, uneven K-12 education and a host of other often interrelated factors. These tectonic shifts, a number of which date from the late 1970s and even earlier, have created fault lines in the economy. The resulting erosion in economic security for the working poor and middle class, visible, for instance, in most Americans' grossly inadequate retirement savings, has left them vulnerable to financial shocks.

The economic earthquake that followed the 2008 housing crash only widened the cracks. Today, stagnant wages affect all but the wealthiest Americans, whose income comes chiefly from their holdings of stock and other financial assets, rather than their jobs.

Government labor data show that the large majority of U.S. workers have faced more than 10 years of anemic wage growth. The pattern is nothing if not inclusive, affecting men and women, blue-collar and white-collar, college graduates and those with only high school diplomas, and private-sector employees and people in public service.

Notably, that trend preceded the Great Recession. Between 2000 and 2007, or before the housing bust, the typical worker's wages rose by a total of only 2.6 percent, according to the liberal Economic Policy Institute. Perhaps not surprisingly, poorer workers fared worse than those higher up the income ladder, but everyone did badly.

Life is no more prosperous for workers at private companies, according to the Washington think-tank. In the private sector, compensation over the last two years is up a negligible 0.3 percent -- for all occupations (see related chart below).

Nor is higher education, the usual remedy invoked by politicians and corporate leaders alike as the key to success, a reliable antidote: Wages of employees with a bachelor's degree were lower last year than they had been a decade earlier.

Indeed, between 2007 and this year wages fell for the bottom 70 percent of income earners, while corporate profits have risen to record highs and companies have grown ever more productive. Going further back, median worker wages between 1979 and 2012 grew a total of 5 percent, while corporate productivity rose nearly 75 percent.

That pattern continues. Over the last 12 months, average hourly earnings have risen 2.1 percent, from $23.60 a year ago to $24.09 last month. Broken down by industry, as of last month average pay ranged from a high of $35.31 for utilities workers to a low of $13.56 for people with leisure and hospitality companies (It's worth noting that such figures do not provide a particularly accurate picture of worker pay because the highest income-earners pull up the averages; in fact, many people earn far less than the official figures suggest.)

With inflation running at 1.5 percent, that means real wages are just keeping ahead of prices -- for now. Inflation is likely to climb as the economy gains speed, but there is no assurance that wages will keep pace.

How does the growing concentration of wealth in the U.S., which now hovers around the same level as it was in the years just before the Great Depression, affect the recovery? By winnowing who gets most of the spoils. Corporate earnings have risen to roughly 14 percent of GDP, from 8.5 percent in 2001, according to the Bureau of Economic Analysis. Company after-tax profits as a share of the broader economy are also at a historic high.

By contrast, the share of income going to employees is at its lowest point in nearly have a century. Economists Emmanuel Saez and Thomas Piketty also recently found that from 2009 to 2011 -- during the recovery -- 121 percent of income gains in the U.S. went to the richest 1 percentof the population. Income for everyone else over that period fell by about a half a percent.

"Even if we have strong demand and are operating at full employment, the gains aren't necessarily widely shared," said Chad Stone, chief economist with the Center for Budget and Policy Priorities.

If wage stagnation has many roots, the chief culprit since the financial crisis is easier to grasp: Demand for goods and services remains weak, the result of the huge output hole gouged into the economy by the housing crash.

As a result, "Persistently high unemployment puts huge downward pressure on wage growth," said Heidi Shierholz, a labor economist with EPI. "Employers don't have to pay big wage increases to get and keep workers when they know people don't have other options."

Slim pay increases affect spending. Although consumers are still shopping -- car sales have surged, for instance -- they are consuming less to compensate for tepid income growth. That is a red flag for an economy that requires rising personal consumption to thrive. Of late, for example, housing has become increasingly unaffordable in major cities around the U.S. because mortgage rates are ticking up faster than people's income.

In short, stagnant wages are both a cause and effect of the weak economy. Businesses avoid hiring because of a shortage of customers. That keeps joblessness high, which allows wary companies to keep a lid on wages, since the slack labor market means workers have few employment options. The virtuous circle of growth, business profits, job-creation and spending that keeps the economy humming in good times can draw into a noose when things get tough.

"Corporate profits are doing great, and part of the reason is that wages are depressed," Shierholz said. "That holds back the recovery to the extent that people who would otherwise be able to spend money aren't getting it. This money is less likely to flow into the economy than if wages were higher."

Feeble pay growth also makes daily life increasingly precarious for millions of Americans. Roughly one in three adults say they wouldn't be able pay their mortgage or rent for even one month if they lost their jobs, according to Demos, a New York public-policy group. About a quarter of workers have no savings to draw on if they face an emergency, such as job loss or a large medical bill.

A major question for Americans is whether pay will accelerate when the economy finally does hit its stride.  In the latter half of the 1990s, after all, wages and salaries rose almost across the board as the high-tech sector boomed and unemployment dipped to 4 percent.

Experts say things will eventually improve if only because, as one economist famously quipped, if something can't go on forever, it will stop. The economy will eventually rebound. Stronger job-creation will boost wages, helping the U.S. along on its slow trudge back from disaster. Less certain is what the country will look like when the tremors subside, or who will remain trapped in the rubble.

Top 10 remodeling projects for adding value to your home