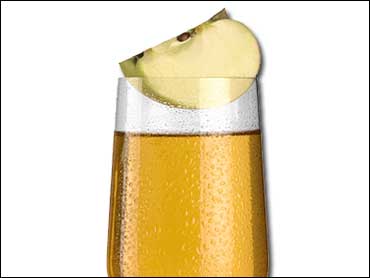 You may think juice is really good for you, but it turns out that may not always be the case.

On "The Early Show," CBS News medical correspondent Dr. Jennifer Ashton cleared up some myths about these drinks that are believed to be healthy.

Myth: Juice is a healthier choice than soda.

Ashton said juice can contain more calories than some sodas.

A cup of apple juice, she said, can contain 117 calories while a cup of cola contains just 91 calories and is also less caloric than orange juice (105 calories). A cup of grape juice has 154 calories. There's also more than 37 grams of sugar in a glass of grape juice, compared with cola's 22 grams.

"If you just go by calorie to calorie and put them head to head...you could be getting a lot more bang for the buck in terms of calories, obviously sugar, in the juice versus the soda," Ashton said.

But what about natural sugars in juice versus chemicals in sodas?

Ashton said, "At the end of the day, you're talking about calories in the form of sweet, empty calories. It's really not adding to your nutrition so you might want to skip it or minimize."

Myth: Drinking juice is just as nutritious as eating the fruit.

When you drink the fruit, Ashton said, you often lose the fiber content that is found in the skin. By eating an apple, you can get up to 15 times the amount of fiber of drinking apple juice -- three grams of fiber vs. 0.2 grams of fiber. In a cup of grape juice, you get very little fiber, about 0.3 grams.

When you eat the actual fruit, the fiber content is more than four times that amount.

Myth: It is less fattening to drink juice than skim milk.

If we're talking about skim milk, Ashton said, it has very little fat in it while most juices have no fat.

However, milk has less sugar, which can pack on the pounds, and more protein. So, for dieters, Ashton said, the higher protein in milk may help satisfy hunger better than fruit juices. Some juices might be more caloric -- grape juice has more calories than even two-percent milk, which has about 30 fewer calories than a cup of grape juice.

Fortified juices can give you the same calcium as milk, but they lack protein that you can get from milk.

However, if you have juice-junkies at home, Ashton cited the health Web site WebMD, and reccommended avoiding anything described as a juice cocktail, juice-flavored beverage, or juice drink. Most of these products contain only small amounts of real juice, she said. The main ingredients are usually water and some type of sugar, such as high-fructose corn syrup.

Nutritionally, these drinks are similar to most soft drinks -- rich in sugar and calories, but low in nutrients.

Any beverage that is less than 100 percent fruit juice must list the percentage of the product that is fruit juice, and the beverage must include a descriptive term, such as "drink," "beverage," or "cocktail." In general, juice drinks contain between 10 percent and 99 percent juice and added sweeteners, flavors, and sometimes fortifiers, such as vitamin C or calcium. These ingredients must be listed on the label, according to FDA regulations.

Children are the single largest group of juice consumers, according to the American Academy of Pediatrics. Children younger than 12 consume 28 percent of all juice and juice drinks. By 1 year of age, almost 90 percent of infants consume juice.

So how much juice should children be allowed to drink?