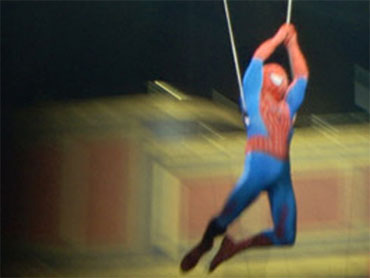 In New York, preview performances of the new Spider-Man musical on Broadway are scheduled to resume this evening. Production of "Spider-Man: Turn Off the Dark" was halted after a stuntman was seriously injured during a performance Monday night.

But, according to CBS News correspondent Elaine Quijano, the show's accident seems to have sparked more interest in the high-flying, $65 million production, which fuses intricate, fast-paced aerial sequences with music from U2's Bono and guitarist The Edge.

Michael Riedel, theater critic for The New York Post, said, "Ironically, people are fascinated by a train wreck. The injuries have led to a boom at the box office. You cannot get a ticket to 'Spider-Man' in the coming week."

However, as the show grows in popularity, investigators continue their work to determine what went wrong earlier this week when stuntman Christopher Tierney, playing Spider-Man, plunged about 30 feet.

Producers for the musical, Quijano reported, have agreed to implement new safety measures. The additional precautions come after a meeting with federal and state labor officials Tuesday.

Quijano remarked in the video taken of the incident, it appears that Tierney's safety line isn't anchored to anything.

Riedel told CBS News, "This latest injury throws everything off because all the actors now are going to be so cautious and so tentative, so afraid to perform the show."

In a written statement, director Julie Taymor said, "An accident like this is obviously heartbreaking for our entire team and, of course, to me personally. ... Nothing is more important than the safety of our 'Spider-Man' family."