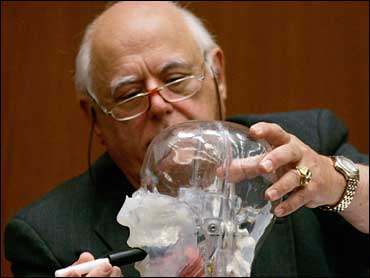 A prosecutor in Phil Spector's murder trial accused a forensic pathologist who testified actress Lana Clarkson shot herself to death of tailoring his testimony to favor Spector.

Dr. Vincent DiMaio said he was basing his opinions on scientific evidence and not trying to help Spector, for whom he is working.

Deputy District Attorney Alan Jackson accused DiMaio of relying too heavily on statistics that the majority of women who commit suicide use handguns.

"Statistics don't get us any closer to the facts of this case, do they?" asked Jackson.

"If we didn't use statistics, you would have to discard DNA," said DiMaio. "DNA is all probabilities."

Spector, 67, is accused of killing Clarkson, whose biggest role was in the 1985 cult film "Barbarian Queen," with a single shot from .38-caliber revolver fired into her mouth on Feb. 3, 2003. Her body was found slumped in a chair in the foyer of Spector's home, where she had gone for a drink after meeting Spector just hours earlier at the House of Blues, where she was a hostess.

During questioning by defense attorney Christopher Plourd, DiMaio supported the suicide argument by characterizing Clarkson as a depressed, aging, out-of-work actress with health and financial problems who was "at the end of her rope."

At one point, as Jackson asked for an explanation of DiMaio's statement that a killer would have had to be standing directly in front of Clarkson to shoot her, the witness offered to demonstrate.

"Sit down," DiMaio told the surprised prosecutor as he left the witness stand. He then held a pen to Jackson's mouth at point-blank range. He had already said few homicides are committed by shooting someone in the mouth.

DiMaio also defended his reliance on a German study of blood spatter in which a scientist shot calves to collect evidence on how far blood spatter can travel. American studies cited by the prosecution involved experiments shooting into sponges.

Jackson stressed that DiMaio had already been paid $26,000 by the Spector defense. Asked how much more he might get, the expert said, "I don't know. The longer you keep talking..."

The courtroom erupted in laughter.