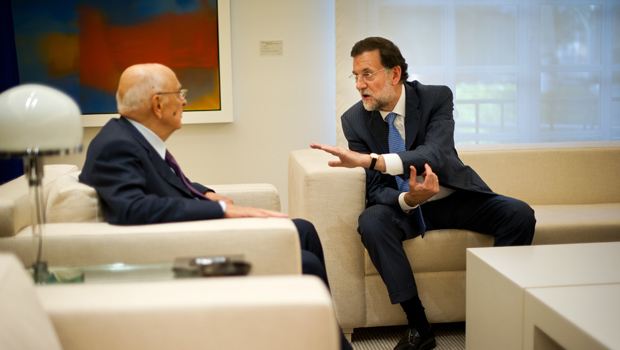 MADRID Spain's prime minister denied Tuesday that he was ready to request a bailout for the country, fending off mounting speculation that a move to ask the European Central Bank to buy Spanish bonds and push down the nation's high borrowing costs was near.

Mariano Rajoy was asked by reporters whether a Spanish bailout request was imminent, and whether it could come as soon as this weekend. He responded no to both questions.

Spain is under pressure to ask for financial assistance to help lower its borrowing costs. But Madrid has hesitated making the move, concerned that the austerity and spending conditions imposed on the recession-hit country would be too much to bear.

Also Tuesday, ratings agency Moody's Investors Service said it would announce the outcome of a review of Spain's sovereign debt rating this month. Moody's had been due to issue the report by the end of September, with many analysts predicting Spain's rating would be reduced to junk.

That would hurt Spanish markets because many pension funds and banks would have to sell Spain's bonds from their portfolios and desist from buying them at auction. That, in turn, would force Spain to pay higher rates to borrow money, further hurting its finances.

The country is in its second recession in three years with an overall unemployment rate of nearly 25 percent, and social unrest is on the rise. The Labor Ministry announced Tuesday that he number of people registered as unemployed in Spain rose by a little under 80,000 people to 4.71 million in September as the summer tourism season came to an end and businesses let workers go.

Rajoy, who has pushed through nine straight months of tough austerity measures, also met Tuesday with the leaders of Spain's 17 regional governments about the economic crisis and the latest austerity measures. The regions, some of them heavily indebted, are being forced to push through government cutbacks affecting cherished national health care and education.