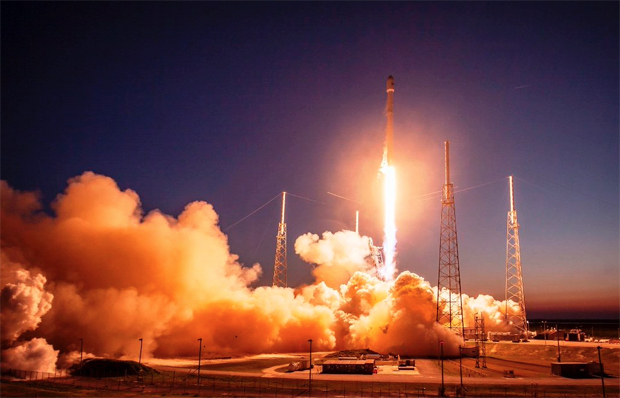 Shrugging off four launch delays over nine days, an upgraded Falcon 9 rocket finally boosted a 5.3-ton communications satellite into orbit Friday, blasting off from Cape Canaveral on a high-energy trajectory that will help the new relay station enter service about 45 days earlier than originally expected.

Under a crystal clear sunset sky, the 229-foot-tall rocket's nine Merlin 1D first-stage engines flashed to life just after sunset, at 6:35 p.m. (GMT-5), throttled up to 1.5 million pounds of thrust and pushed the Falcon 9 away from launch complex 40 at the Cape Canaveral Air Force Station.

Launch tries Feb. 24 and 25 were called off because of problems super cooling the rocket's liquid oxygen propellant, a key feature in the upgraded booster's design. A third launch try Sunday was scrubbed after a boat wandered into the off-shore danger zone, triggering a delay. SpaceX attempted to launch later in the window but but a low-thrust warning triggered a dramatic engine shutdown on the pad. A fourth launch attempt Tuesday was scrubbed because of high winds aloft.

This time around, there were no propellant problems, the weather cooperated and the countdown hit zero right on time. Initially climbing straight up, the Falcon 9 quickly arced over and shot away to the east, putting on a spectacular show as the vehicle rose into the glare of the westering sun.

After boosting the rocket out of the dense lower atmosphere, the engines shut down as expected about two minutes and 36 seconds after liftoff. The first stage then fell away for a planned descent to a landing barge some 400 miles offshore while the second stage continued the climb to space under the power of a single Merlin engine.

Two second stage engine firings were required to boost the 11,620-pound SES-9 relay station into a slightly "super-synchronous" transfer orbit with an initial high point, or apogee, of around 24,420 miles and a low point, or perigee, of around 180 miles.

The satellite separated from the Falcon 9 second stage 31 minutes after launch. On-board propulsion will be used to raise the perigee, lower the apogee slightly and align the plane of the orbit with the equator, eventually circularizing the orbit 22,300 miles up at 108.2 degrees east longitude.

In such geosynchronous orbits, satellites take 24 hours to complete one trip around the world and thus appear to hang stationary in the sky, allowing the use of low-cost fixed antennas on the ground. SES-9 will serve southeast Asia, the Indian and Pacific ocean regions.

SES's initial agreement with SpaceX called for "guidance-controlled" engine shutdown and satellite separation at a lower apogee, around 16,155 miles. From that point, SES expected the satellite to take 93 days to work its way to an operational orbit.

But SpaceX agreed to burn the Falcon 9's second stage engine a few extra seconds to boost apogee by some 8,000 miles, allowing SES to reduce the time to final orbit by about 45 days. That will let the company put SES-9 into service earlier than originally expected.

And that's important to SES because the company has waited more than six months for a Falcon 9 launch opportunity after a spectacular in-flight failure last June.

"We met with SpaceX and said guys, how can you improve our mission profile? How can you get us to orbit a little bit quicker?" Martin Halliwell, SES chief technology officer, told reporters before the first launch try. "And so we've agreed with SpaceX that we ought to change the mission from a guidance-controlled shutdown of the second stage to what we're calling a minimal-residual shutdown.

"To de-technify that, what it really means is quite simple," he said. "We're going to burn the motor on the second stage for a few more seconds. That's all it really means. The big deal about that is, we're going to reduce our time to orbit by about 45 days. ... We should be in operational service at the end of May or the very beginning of June.

Because of the heavy weight of the SES-9 satellite and the required high-energy boost to a super-synchronous transfer orbit, the Falcon 9's first stage did not have enough left-over propellant to slow down and fly back to a landing at the Cape Canaveral Air Force Station. Instead, SpaceX attempted a landing on a barge stationed some 400 miles off shore.

Because of the rocket's trajectory and high speed at stage separation, company engineers were not optimistic. A brief video feed from the barge showed what appeared to be the rocket's exhaust plume nearing the landing platform, but it was off center and the television signal cut off before the rocket came into view.

SpaceX founder Elon Musk tweeted later that the stage "landed hard on the droneship. Didn't expect this one to work (v hot reentry), but next flight has a good chance."

The company hopes to perfect its landing techniques with incremental improvements and to eventually re-launch recovered stages, even those from high-energy trajectories, greatly reducing costs. Halliwell said SES would have no problem buying a used rocket "if it's flight worthy."

"I did throw out a challenge to SpaceX, that we would be the first satellite operator that would use the same rocket twice to get to geo orbit," he said. "We discussed that with our investors and they really liked that. That's something I'd really like to do."

SpaceX advertises a $60 million price tag for a new Falcon 9. Halliwell would not speculate about the eventual cost of a used rocket, but said that when discussing the possibility with SpaceX President Gwynne Shotwell, she joked "it should be more expensive because it was flight proven."

SES-9 is the first of three SES comsats scheduled for launch this year aboard Falcon 9 rockets with two more on tap next year. SES currently operates a fleet of 53 communications satellites with seven more under construction and four more in the development phase.

"We'll also be putting in support for enterprise-type data services. We have a mobility package on board, predominantly this is for maritime services, so we have an Indian Ocean beam ... and also we'll be looking at aero mobility for the regional marketplaces in Asia.

"And finally, the institutional marketplace, government-type services as well," he said. "All of these will be supported by SES-9. So this is really a very, very big deal for us.