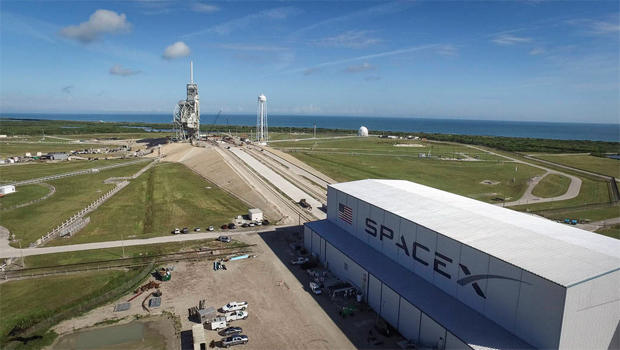 Continuing its recovery from a launch pad explosion last September, SpaceX is gearing up for a Falcon 9 engine test firing at a repurposed shuttle pad at the Kennedy Space Center, a critical step toward verifying the booster and extensively modified pad systems are ready for launch Feb. 18.

Multiple sources said the “hot fire” test of the rocket’s nine Merlin 1D first stage engines is on tap Friday, but SpaceX has not announced an official target date and as of midday Thursday, the booster was not yet on the pad.

Whenever they occur, the test firing and eventual launch will mark the first operational use of pad 39A since July 2011 when Atlantis blasted off on the shuttle program’s final flight and the first Florida launch for SpaceX since a Falcon 9 exploded just before a similar pre-flight hot fire test Sept. 1 on nearby pad 40 at the Cape Canaveral Air Force Station.

The spectacular mishap knocked pad 40 out of action, but SpaceX already was modifying pad 39A, just 3.6 miles away, to support Falcon 9 launches and flights by a more powerful heavy-lift version of the rocket.

Since the accident five months ago, engineers have been working around the clock to complete extensive modifications to the historic pad where huge Saturn 5s once boosted Apollo astronauts to the moon and where the shuttle Columbia took off on the program’s first flight in 1981.

A large rocket-processing hangar at the base of the elevated pad now blocks the old river-rock roadway where massive crawlers once carried Saturn rockets and space shuttles. Falcon 9s will be carried from the hangar, which can house five rockets at a time, to the top of the pad horizontally by a transporter-erector and then raised vertical using a powerful hydraulic system.

Propellant lines leading to liquid oxygen and kerosene fuel tanks are in place along with a revamped water deluge system to cool pad structures during launch and to deaden the acoustic shock of engine ignition. Data and power lines have been installed and the old flame trench bisecting the pad to carry exhaust away has been partially filled in with hydraulic and other systems.

SpaceX is slowly dismantling the old payload changeout room that used to swing into place around space shuttles before launch but will keep the central fixed service structure gantry. A crew access swing arm will be installed later for use by astronauts boarding SpaceX commercial crew capsules for flights to the International Space Station.

“This is a huge pad,” Hans Koenigsmann, vice president of flight reliability for SpaceX, told reporters Wednesday. “The transporter-erector is huge. It’s like one-and-a-half million pounds of steel (and controls) all the interfaces (with the rocket). ... This whole thing was a huge effort, and at the end of it you want to test and test things again to make sure they’re ready to go.”

SpaceX chalked up a successful return to flight last month with a launch from Vandenberg Air Force Base, Calif., and hopes to make it two in a row with its inaugural launch from pad 39A at 10:01 a.m. EST (GMT-5) on Feb. 18. If all goes well, the rocket’s first stage will fly itself back to a landing at the Cape Canaveral Air Force Station for possible refurbishment and eventual use on another mission.

Over the past week or so, the transporter-erector has been seen at the top of the pad going through repeated tests but overnight Tuesday, it was lowered and rolled back to the processing hangar. Exactly when it might reappear carrying a Falcon 9 rocket is not yet known.

All Falcon 9s undergo fueling and a short first stage engine test firing before each flight to make sure all ground and flight systems are operating properly before pressing ahead with launch a few days later.

Five minutes before a planned hot fire Sept. 1, the second stage of a Falcon 9 rocket carrying a communications satellite suddenly exploded in a churning fireball. The rocket and the $200 million satellite were destroyed in the conflagration and the pad suffered unspecified damage. SpaceX hopes to complete repairs and return it to operation by mid May.

Engineers investigating the disaster were unable to find a definitive root cause. But they believe the most likely explanation is the rupture of a high-pressure helium tank inside the rocket’s second stage liquid oxygen tank. Helium is used to pressurize the propellants, pushing them into the engines during flight.

SpaceX has modified the fuel-loading sequence to prevent the sort of ultra-low temperatures that could lead to solidification. The revised procedures were used during SpaceX’s successful return-to-flight last month at Vandenberg.

SpaceX originally planned to make its first use of pad 39A with launch of an EchoStar communications satellite in late January, followed by the space station resupply mission this month. The station flight, known as CRS-10, originally was planned for last October but it was delayed following the Sept. 1 launch pad mishap.

Completing the modifications at complex 39A delayed the EchoStar launch campaign and NASA sources said the agency asked SpaceX to keep the station resupply flight on track for launch this month. As a result, the EchoStar launch  was moved to around March 1.

The Dragon cargo ship that will be boosted into space atop the Falcon 9 will carry more than 5,200 pounds of supplies and equipment to the station, including an ozone monitoring experiment, 580 pounds of crew supplies, 842 pounds of spare parts and other vehicle hardware and more than 1,600 pounds of science gear.

Also on board: 20 mice that will be returned to Earth aboard the Dragon as the end of its mission to help researchers learn more about what processes prevent most vertebrates from regrowing lost limbs or tissue.

NASA hopes to follow the SpaceX/Dragon mission by launch of an Orbital ATK Cygnus cargo ship atop a United Launch Alliance Atlas 5 rocket around March 19. SpaceX plans to follow the CRS-10 flight by launching the EchoStar satellite and then an SES communications relay station shorty thereafter.

The SES fight will be the first using a previously flown Falcon 9 first stage, one that was launched last year and recovered after a pinpoint landing on an off-shore drone ship. SpaceX hopes to lower launch costs by routinely recovering, refurbishing and re-flying booster stages.