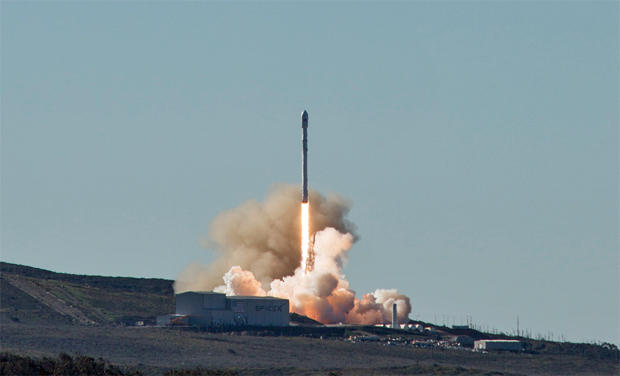 That dramatic conflagration likely was caused by super-cold oxygen in the booster’s second stage that worked its way beneath the carbon fiber outer skin of a high pressure helium tank, triggering the tank’s rupture and the near-instant destruction of the rocket and its $200 million satellite payload.

For Saturday’s flight, SpaceX engineers changed a variety of pre-launch procedures, loading RP-1 kerosene fuel and liquid oxygen earlier in the countdown than before to slightly raise temperatures around the helium tanks. The technique was used for an engine test firing earlier this month and went off without a hitch Saturday.

After brief concern about winds and a boat in the offshore danger zone, the slender 229-foot-tall rocket’s nine first stage engines thundered to life at 9:54 a.m. PST (GMT-8), throttled up to full power and majestically pushed the booster away from its seaside launch pad at Vandenberg Air Force Base northwest of Los Angeles.

Trailing a brilliant tongue of fiery exhaust, the Falcon 9 quickly arced away on a southerly trajectory as it climbed out of the dense lower atmosphere, its Merlin 1D engines generating a combined 1.5 million pounds of thrust.

The first stage engines shut down about two-and-a-half minutes after launch. The stage then fell away and the single engine powering the Falcon 9’s second stage took over, its nozzle glowing bright red against the limb of the Earth, generating 210,000 pounds of thrust to continue the climb to space.

The first stage, meanwhile, flipped around and restarted three of its engines to reduce forward velocity and begin a descent to a SpaceX droneship stationed several hundred miles south of Vandenberg. Recovering stages for eventual refurbishment and reuse is a major element in company founder Elon Musk’s ongoing drive to reduce launch costs.

After a second engine firing to slow the booster still more for atmospheric entry, the stage plummeted tail first toward the Pacific Ocean, restarted a single engine, deployed four landing legs and settled to a picture-perfect touchdown on the droneship Just Read the Instructions.

It was the company’s seventh successful landing in 12 attempts, its fifth on a droneship and the first for a Falcon 9 launched from Vandenberg.

But as with all Falcon 9 flights, the landing was a strictly secondary objective. The primary goal was to boost the 10 Iridium NEXT satellite telephone relay stations into orbit and the Falcon 9 did just that.

The second stage completed the first of two burns just over nine minutes after liftoff. A short three-second burn was executed 43 minutes later to complete the climb to an initial 488-mile-high orbit tilted 86.4 degrees to the equator.

Seven minutes after that, the 10 Iridium NEXT satellites were released in sequence from a dispenser mounted atop the second stage, the first batch in a planned 72-satellite network that will replace the company’s current fleet of aging low-Earth-orbit mobile voice and data relay stations.

The complex satellite-by-satellite swap-out will allow Iridium to retire first-generation relay stations that have operated long past their design life, replacing them with upgraded, more powerful spacecraft and expanding the company’s capabilities in an increasingly competitive commercial space operations environment.

“Frankly, it means our future, because we have to replace this network anyway,” Iridium CEO Matthew Desch said in an interview with CBS News last year. “I often think of it as one of the biggest tech refreshes in the world right now, with a new $3 billion constellation.”

Altogether, Iridium is paying SpaceX upwards of $500 million for seven Falcon 9 launches to boost 70 Iridium NEXT satellites into orbit, 10 at a time, over the next year or so. Two more will be launched aboard a different rocket.

“The new satellites are a lot more powerful, a lot more processing power, they’ve got a lot more memory, a lot more capacity, they actually expand our ability to support customers,” Desch said. And, he added, “they’re easier to operate.”

Engineers will spend three months testing each new satellite and carrying out a satellite-by-satellite swap-out, moving a new spacecraft into position near the vehicle it’s replacing and switching service from one to the other.

The Iridium network requires 66 satellites to provide global coverage, but the company plans to launch 15 in-orbit spares to provide immediate backup in case of an in-orbit malfunction and to serve as an insurance policy of sorts in the event of a launch failure.

As important as the Falcon 9 launching was to Iridium, it was even more important for SpaceX after an in-flight failure in June 2015 and the dramatic on-pad explosion Sept. 1 at Cape Canaveral.

The Falcon 9’s record of two failures in 29 rockets stands in contrast to the record of its major U.S. competitor, United Launch Alliance, which has launched 102 more expensive Atlas 5s and Delta 4s without a single failure. The European consortium Arianespace has successfully launched more than 75 Ariane 5s in a row.

But SpaceX enjoys widespread support in the satellite industry, in large part because of the Falcon 9’s innovative design and relatively low cost. With a list price of $60 million per booster, a Falcon 9 is roughly half the cost of rockets offered by its major competitors.

With a successful return to flight Saturday, SpaceX will now focus on working off a backlog of delayed payloads, launching a commercial communications satellite from Cape Canaveral later this month and a space station resupply mission in February. The first flight of a “used” Falcon 9 first stage is expected in the next few months.

Gwynne Shotwell, SpaceX president and CEO, said the company currently has about 70 flights on its manifest, a backlog valued at some $10 billion.

The Wall Street Journal reported Friday that SpaceX lost $260 million in the wake of the 2015 in-flight failure, launching just six missions that year instead of 12 that were originally planned.

It’s not known what impact the September failure might have on the company’s bottom line or how delays will ripple through its manifest. SpaceX launched eight flights in 2016 and was forced to delay at least seven more.

But Shotwell is optimistic, saying earlier this week that no customers have abandoned SpaceX. Bret Johnsen, SpaceX chief financial officer, said in a statement the company continues to enjoy “strong customer relationships.”

“Furthermore,” he said, “with over $1 billion in cash reserves and no debt, the company is in a financially strong position and is well positioned for future growth.”