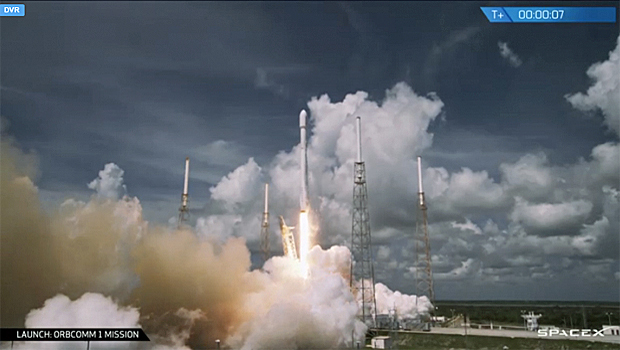 Two private space launches in two days -- one by Orbital Sciences and one by SpaceX -- have sent an unmanned cargo ship on its way to the International Space Station and boosted multiple communications satellites into orbit.

On Monday, a SpaceX Falcon 9 rocket boosted six lightweight Orbcomm data relay satellites into space in a commercial launch marking the 10th apparent success in a row for the California rocket builder and a major upgrade for Orbcomm's fleet of machine-to-machine cellular communications stations.

The launching came after a frustrating string of delays due to bad weather and technical issues, including a potential problem Monday that delayed liftoff nearly two hours. But engineers eventually cleared the rocket for flight and the Falcon 9's nine first stage engines roared to life at 11:15 a.m. EDT (GMT-4).

The 225-foot-tall booster majestically climbed away from launch complex 40 at the Cape Canaveral Air Force Station, arcing away over the Atlantic Ocean through a partly cloudy sky trailing a jet of fiery exhaust and a deep, cracking roar that slowly faded. Ten minutes later, the rocket's second stage and its cargo of six Orbcomm satellites were in their planned preliminary orbit.

Because the payload was relatively light, the Falcon 9 first stage was expected to have plenty of propellant left over for another attempt to make a powered descent to an ocean splashdown, deploying landing legs in a test of technology that SpaceX engineers hope will eventually allow them to fly stages back to touchdown near the launch site for refurbishment and reuse.

A similar test during a Falcon 9 flight in April was successful, although stormy conditions at sea prevented recovery crews from salvaging the stage. This time around, splashdown was expected to occur closer to shore, making the spent booster easier to reach.

But the primary goal of the mission was putting the Orbcomm OG2 satellites into orbit to expand and improve the company's global communications network.

The satellites were expected to be released from the Falcon 9 second stage starting about 15 minutes after launch. SpaceX launch commentary ended before satellite deploy, however, and company officials said details would be provided later in the day.

The new satellites are the first of 17 second-generation spacecraft Orbcomm plans to launch this year to begin replacing less capable satellites launched more than 15 years ago in a bid to improve global coverage for the company's more than 850,000 subscribers.

Weighing about 375 pounds each, the solar-powered OG2 satellites can handle six times more data and transmit twice as fast as the OG1 satellites they are replacing.

The new OG2 satellites, built by Sierra Nevada Corp., will work in concert with 27 first-generation spacecraft already in orbit to reduce the time needed for customers to send and receive data.

"One of the neat things about Orbcomm is that every satellite works independently of the whole group, so we don't have any of the cross-link concerns where if you lose some spacecraft, or you lose the spacecraft that's over the Earth station, the whole network doesn't work," Eisenberg said.

Spaceflight Now reported that Orbcomm is paying SpaceX $42.6 million for two launchings, a substantial discount over the advertised $60 million price for a basic Falcon 9. The six satellites launched Friday were valued at around $70 million.

The launch of the SpaceX rocket came just a day after private space competitor Orbital Sciences successfully completed its second launch of a cargo ship to the International Space Station.

The Orbital Sciences Antares rocket carrying a Cygnus cargo capsule thundered away from the Virginia coast Sunday and streaked into orbit, kicking off a three-day flight to deliver more than 1.5 tons of supplies and equipment to the ISS.

After a string of delays caused by stormy weather, conflicts with other flights and an engine test failure, the rocket's two Russian-built first stage engines, supplied by Aerojet Rocketdyne, ignited with a roaring rush of fiery exhaust at 12:52 p.m. EDT (GMT-4).

The 133-foot-tall rocket quickly climbed away from pad 0A at the Mid-Atlantic Regional Spaceport at NASA's Wallops Island, Va., flight facility, arcing away to the southeast through a partly cloudy sky and putting on a dramatic Sunday show for area residents and tourists jamming local roads and beaches.

"We're very excited about the fact that we're in orbit and we're headed to the station," said Frank Culbertson, a former shuttle commander who serves as Orbital's vice president and general manager of advanced programs. "We're really looking forward to the rendezvous."

If all goes well, the uncrewed Cygnus cargo craft will reach the lab complex early Wednesday, pulling up to within about 30 feet and then standing by while the lab's robot arm, operated by station commander Steve Swanson, locks on to pull it in for berthing at the Earth-facing port of the forward Harmony module.

"Thanks Reid! We are coming your way -- carefully," Orbital tweeted back.

This is Orbital's second operational station resupply mission under a $1.9 billion contract with NASA that calls for eight flights through 2016 to deliver 20 tons of cargo. SpaceX holds a similar resupply contract, valued at $1.6 billion, for 12 flights to deliver some 44,000 pounds of equipment and supplies.

The commercial contracts were awarded to make up for the lost payload capability of NASA's space shuttle, which was retired in 2011. SpaceX has carried out three operational resupply missions to date with two more flights on tap in September and December and three flights planned next year. Orbital plans its third mission in October with two flights on tap in 2015.

William Gerstenmaier, NASA's director of space operations, said the agency plans to announce a second round of contracts in the December-January timeframe to continue commercial resupply operations past 2016. NASA hopes to operate the space station through 2024, if not longer, and keeping the lab supplied is critical.

For the current mission, known as Orb-2, the Cygnus cargo ship was loaded with 3,293 pounds of crew supplies, including food, spare parts and other station hardware, science equipment, spacewalk components and computer hardware.

The research cargo includes a variety of student experiments, supplies for NASA's Human Research Facility lab rack, igniters for the station's combustion test facility and a Japanese experiment designed to study convection in the microgravity environment of space.

Also on board: 28 small satellites -- nanosats -- built by Planet Labs of San Francisco, the third "flock" of spacecraft launched to date for testing in a commercial venture to continuously photograph the Earth. Four other nanosats also are on board, including one built by NASA to test techniques for returning small experiment samples to the ground.

The Cygnus spacecraft will remain attached to the station for about a month. After it is unloaded and re-packed with trash and no-longer-needed equipment, the lab's robot arm will unberth the cargo ship and release it from the station.

Before falling back to Earth and burning up in the atmosphere, the cargo ship will spend a few extra days in orbit for tests of new rendezvous equipment and procedures designed to allow the craft to remain in orbit for extended periods.