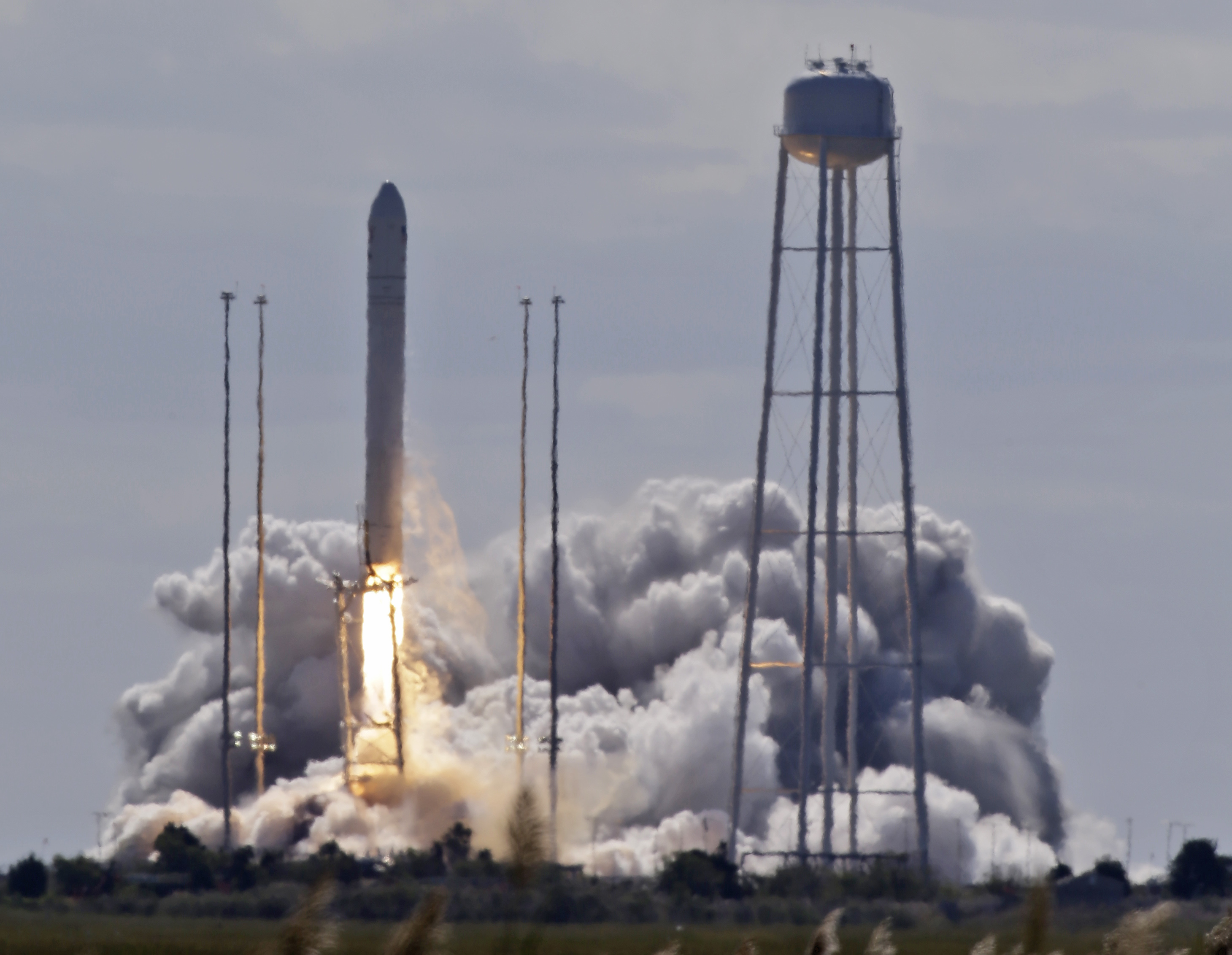 In a critical test flight for NASA's space station program, an Orbital Sciences Corp. Antares rocket making only its second flight blasted off from the Virginia coast Wednesday, lofting an unmanned cargo ship on its maiden flight to the international lab complex.

The demonstration mission is a critical test run for Orbital to prove the company's new rocket and Cygnus cargo ship can execute an autonomous rendezvous with the space station and, if necessary, carry out an abort if something goes wrong.

If the four-day trip to the station is successful, Orbital will be clear to begin routine cargo delivery missions later this year, joining Space Exploration Technologies, or SpaceX, in a commercial program intended to make up for the retirement of the space shuttle.

Burning kerosene and liquid oxygen, the refurbished Aerojet Rocketdyne AJ-26 engines fired for nearly four minutes, boosting the rocket out of the dense lower atmosphere and into the orbital plane of the space station.

Dramatic television views from a camera mounted on the rocket showed the Virginia coastline receding in the background and then the limb of the Earth as the spacecraft accelerated toward orbit. A few moments later, the spent first stage could be seen falling away.

The Antares second stage, powered by an Alliant Techsystems solid-fuel motor, then took over, igniting at an altitude of about 116 miles and firing for two-and-a-half minutes to put the spacecraft into an initial orbit with a high point, or apogee, of about 186 miles and a low point, or perigee, of around 151 miles.

A few moments later, the cargo ship was released from the spent second stage motor and its two solar panels unfolded as planned.

Frank Culbertson, a former shuttle commander and Orbital vice president, said telemetry showed the Cygnus was healthy, its solar arrays were pointed at the sun and its computers and guidance systems were operating normally.

If all goes well, the Cygnus will approach the station from behind and below, pulling up to the outpost in stages as flight controllers test communications links, check out the spacecraft's GPS navigation system and test abort procedures before clearing the ship for final approach to the station.

Assuming no major problems develop, the spacecraft will pull up to within about 30 feet of the lab complex around 7:15 a.m. Sunday.

Italian astronaut Luca Parmitano, operating the station's robot arm, will lock onto a grapple fixture and the spacecraft will be pulled in for berthing at the Earth-facing port of the forward Harmony module. A similar berthing technique is used to attach SpaceX Dragon capsules and Japanese HTV cargo ships.

"It's a new vehicle and you ... have to expect that something could go wrong and you have to be ready for all scenarios," space station flight engineer Karen Nyberg told The Associated Press.

"But we're expecting it to be very similar to what we did (to berth) the HTV (in August) and we're actually really, really excited about it and looking forward to it."

For the demonstration flight, the Cygnus is carrying about 1,500 pounds of food, clothing and other non-critical supplies and equipment.

"This is the first time we've ever actually launched a dedicated spacecraft carrying cargo for human consumption in space," said Frank Culbertson, a former space shuttle commander and Orbital vice president. "So this is a big deal for us."

The demonstration flight is the final requirement in a $288 million contract with NASA's Commercial Orbital Transportation Services, or COTS, program, which funded development of two commercial cargo carriers to take over U.S. space station logistics in the wake of the space shuttle's retirement.

Assuming no major problems develop, Orbital Sciences will press ahead with operational space station resupply flights under a separate contract calling for delivery of 40,000 pounds of cargo over at least eight missions.

"We'll be attached to the station for approximately 30 days, and then 47 days after deorbit, we expect to launch ORB-1, as we call it, our first contract mission," said Culbertson. ""So we are deep in preparation for that one already and going through the testing required."

SpaceX holds a $1.6 billion contract with NASA to provide 12 cargo flights to the station for delivery of more than 44,000 pounds of equipment and supplies. A separate $396 million contract covered initial test and demonstration flights.

SpaceX successfully launched its Falcon 9 rocket with a dummy payload in 2010. The company then launched two test flights, sending company-built Dragon cargo ships to the station, and two operational resupply missions, the most recent flight in March.

"It's time for us really to start having flights on a regular basis and expect that the next one will be there," said space station Program Manager Mike Suffredini. "So I'm looking at this next year, 2014, to be the year where we really settle in, where we have regular orbital flights and regular SpaceX flights and that we actually see them within a few weeks of when we expect to have them there.

"And that's important because (we need) to reduce the amount of up mass we have for logistics, which we can do if we have a consistent supply chain, and really fill these vehicles up with research. That's the big transition we have to make in the next year now that we have Orbital flying as well."