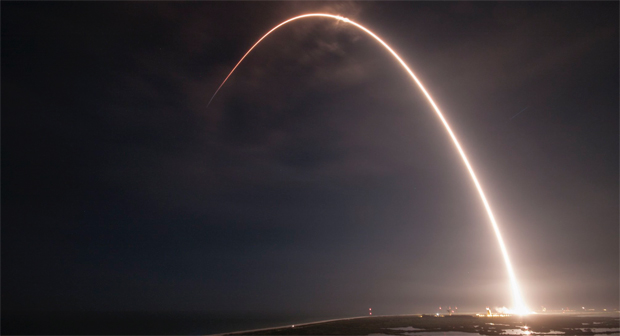 A SpaceX Falcon 9 rocket boosted a Japanese communications satellite into orbit early Sunday, lighting up the deep overnight sky as it climbed away from Cape Canaveral on a jet of fiery exhaust.

While the rocket's second stage was boosting the relay station to orbit, the first stage successfully flew itself back to landing on an off-shore drone ship, the California rocket builder's sixth successful booster recovery in 11 tries. It was the latest step in an on-going push by SpaceX founder Elon Musk to lower costs by recovering, refurbishing and re-launching spent stages.

If all goes well, SpaceX hopes to re-launch a previously used first stage later this year. But as always, company officials said, stage recovery is a purely secondary objective. The first priority Sunday was boosting the JCSAT-16 communications satellite into orbit for Sky Perfect JSAT Corp. of Tokyo, a major provider of video and data services across the Asia-Pacific region.

Arcing to the east atop 1.7 million pounds of thrust, the slender rocket rapidly shed weight and smoothly accelerated as it consumed its first-stage load of liquid oxygen and kerosene fuel, breaking through the "sound barrier" a little more than a minute after liftoff.

The first stage engines shut down as expected about two-and-a-half minutes after liftoff and the stage fell away to begin its landing try. The second stage's single engine ignited seconds after separation to continue the payload's boost to orbit.

Life's Origins: A Challenge to the Primordial Soup Theory

SpaceX's most recent previous flight, a space station cargo mission to low-Earth orbit, featured a successful first-stage landing back at the Air Force Station. But the JCSAT-16 satellite launched Sunday was bound for a much higher orbit, requiring more of an initial boost from the first stage. As a result, not enough propellant was left over for a return to the launch site.

Instead, just about the time the second stage was shutting down after the first of two planned "burns," the first stage settled to the deck of SpaceX's whimsically named "Of Course I Still Love You" drone ship some 370 miles East of Cape Canaveral.

"Tonight, we're channeling our inner Simone Biles, and we're hoping to stick the landing," Kate Tice, a SpaceX engineer, said before launch, referring to the U.S. gymnastics champion whose precision dismounts helped win a gold medal at the Rio Olympics.

SpaceX's most recent previous barge landing try in June ended in failure when the rocket apparently ran out of fuel an instant before touchdown. This time around, the booster appeared to land without a hitch and video from the drone ship showed the stage parked on its four extendable legs near the center of the landing deck target.

While the first stage was flying back toward the drone ship, the second stage was wrapping up a six-minute engine firing to boost the rocket and its satellite payload into an initial orbit. About 18 minutes later, the second stage engine re-ignited for a short one-minute burn to finish the job, releasing JCSAT-16 into a highly elliptical orbit.

If all goes well, on-board thrusters will raise the low point of the orbit over the next several weeks, putting the satellite into a final circular orbit 22,300 miles above the equator where it will circle the globe in lockstep, taking 24 hours to complete one orbit.

Owned by Sky Perfect JSAT Corp. of Tokyo, the JCSAT-16 relay station, built by Space Systems/Loral, features Ka-band and Ku-band transponders to provide video and data services across the Asia-Pacific region. It will initially act as a backup to an older satellite that was launched 16 years ago.

This was the second Sky Perfect launch this year and the eighth flight overall for SpaceX. At least eight more missions are believed to be planned before the end of the year.