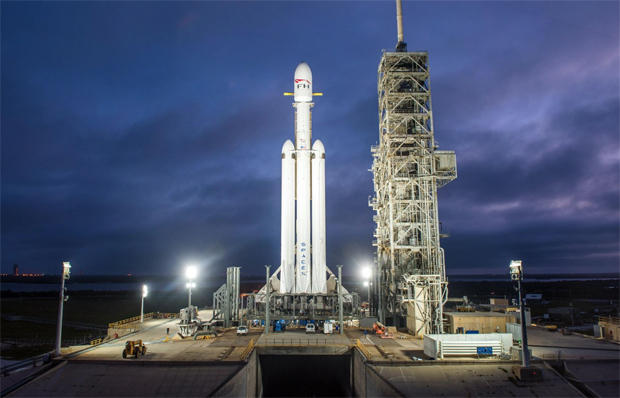 A new SpaceX rocket blasting off on its long-awaited maiden flight this Tuesday --  the Falcon Heavy -- promises to put on a spectacular show as the world's most powerful booster climbs away from the Kennedy Space Center's historic pad 39A atop nearly 5 million pounds of thrust from 27 engines, nine in each of three core stages.

The Heavy will be the most powerful rocket launched anywhere in the world since NASA's now-retired space shuttle, the Soviet Union's unsuccessful N1 moon rocket, its short-lived Energia booster and the gargantuan Saturn 5 that launched NASA's Apollo moon missions with a staggering 7.5 million pounds of liftoff thrust.

NASA is currently building an even more powerful rocket known as the Space Launch System, or SLS, that will generate 8.8 million pounds of thrust in its initial configuration and up to 11.9 million pounds in a follow-on cargo variant.

But the SLS is not expected to fly until late 2019 or later, and the Falcon Heavy, assuming it succeeds, will easily hold the title of world's most powerful operational booster in the near term.

"I think this could be an extremely significant launch, first of all because it's happening in 2018, not whenever SLS is going to launch. It is going to be, if it succeeds, the most powerful rocket in the world, and that enables lots of different things," said John Logsdon, a noted space historian and space policy analyst.

"It poses a competitive challenge to the NASA way of doing business. Just as SpaceX has posed a challenge to (competitor) United Launch Alliance that seems to be succeeding, it could well pose a challenge to NASA's launch strategy," Logsdon said.

Adding to the drama of the Heavy's first flight is its payload: A 2,760-pound Tesla Roadster provided by SpaceX and Tesla founder Elon Musk, which will be released onto a trajectory carrying it beyond low-Earth orbit and into deep space. David Bowie's "Space Oddity" apparently will be playing on the stereo -- or at least in SpaceX mission control in Hawthorne, California.

"Payload will be my midnight cherry Tesla Roadster playing 'Space Oddity,'" Musk tweeted late last year. "Destination is Mars orbit. Will be in deep space for a billion years or so if it doesn't blow up on ascent."

Rockets typically carry dummy payloads, or mass simulators, when making their first flights. While blasting a $250,000 Tesla into space might seem extravagant, building a simulator almost certainly would have cost as much or more. And besides, launching a sports car into space is much more in keeping with Musk's playful streak.

Responding to a question from a Twitter follower, Musk said:

With forecasters predicting an 80 percent chance of good weather, liftoff is targeted for 1:30 p.m. EST (GMT-5) Tuesday. The test flight has generated widespread interest in the space community and beyond, but Musk has gone out of his way to downplay expectations.

"This is one of those things that's really difficult to test on the ground," Musk said last year. "There's a lot of risk associated with the Falcon Heavy, a real good chance that that vehicle does not make it to orbit. Want to make sure I set expectations accordingly. I hope it makes it far enough away from the pad that it does not cause pad damage, I would consider even that a win, to be honest. And uh, yeah. Major pucker factor, it really is."

SpaceX has shaken up the commercial rocket industry, launching 48 Falcon 9 rockets since the booster's debut in 2010 -- 18 last year alone -- and perfecting techniques for recovering the booster's first stage so it can be refurbished and re-launched, part of Musk's long-range plan to lower costs through "rapid reusability."

The company has suffered one in-flight failure and one on-the-pad explosion, but it has put together an impressive list of accomplishments for a startup without decades of experience. It has a $10 billion backlog of payloads awaiting launch holds, more than $4 billion in NASA contracts to deliver supplies to the International Space Station and, eventually, astronauts starting late this year or early next.

Lee Solid, a retired rocket engineer who helped build the engines that powered the Saturn 5 and the space shuttle, visited SpaceX's processing hangar at the base of pad 39A last week with former shuttle commander Eileen Collins.

"I was impressed with the whole vehicle and the people working it," he said in an interview Sunday. "If I had any question or negative thoughts about what Elon's doing, they went away. It was a very professional operation out there."

The Heavy is made up of three side-by-side Falcon 9 core stages, each equipped with nine SpaceX Merlin engines burning RP-1 kerosene fuel and liquid oxygen. An upper stage atop the central core is equipped with a single Merlin engine generating 210,000 pounds of push. For its maiden flight, the Tesla Roadster will be mounted in a nose-cone fairing atop the second stage.

At liftoff, with all 27 core stage engines firing in concert at about 92 percent of full power, the Heavy will generate 4.7 million pounds of thrust. That's more than twice the liftoff power of a United Launch Alliance Delta 4 Heavy and more than one-and-a-half times the power of a European Ariane 5.

Flying for the first time, it's difficult to predict exactly how the Falcon Heavy will perform. As it consumes propellant, loses weight and accelerates, hard-to-model aerodynamic stresses will build up, producing extreme "loads" on the structure and localized heating.

And then there's the issue of controlling ignition, startup and steady operation of 27 engines firing in close proximity. The vibration environment with 27 clustered engines is extremely difficult to model, one veteran engineer said, subjecting the rocket to significant stresses. The Soviet Union built the huge N1 moon rocket with 30 first stage engines, but the booster failed all four times it was launched.

The Heavy's engines were test fired at the pad on Jan. 24 and SpaceX said later there were no problems. But Musk cautioned last year "there's a lot that could go wrong" when 27 engines are firing at once, adding, "I encourage people to come down to the Cape and see the first Falcon Heavy mission. It's guaranteed to be exciting."

And not just for the launch. After engine shutdown, the two previously flown outside core stages will separate, flip around and fly back to the Cape Canaveral Air Force Station for side-by-side rocket-powered descents to touchdown at SpaceX's Landing Zone 1. The central core stage will attempt to land on an off-shore droneship.

The recovery of three stages will push SpaceX's record to 24 successful landings in 27 attempts while providing area tourists and residents with a dramatic show highlighted by dueling sonic booms.

On SpaceX's web site, the company claims the Heavy can send a payload weighing up to 140,660 pounds to low-Earth orbit and 37,000 pounds to Mars. It can send a probe to distant Pluto weighing up to 7,720 pounds, about seven times the mass of NASA's New Horizons Pluto flyby mission, which was launched by the most powerful version of United Launch Alliance's Atlas 5 rocket.

The Saturn 5, which flew 13 times, had an Earth-escape payload capacity of more than 100,000 pounds, about three times the capability of the Falcon Heavy. But at an advertised price of $90 million, the Heavy is much less expensive and can still boost sizable payloads beyond low-Earth orbit.

But SpaceX's long-range plans for the rocket are somewhat foggy. Musk said last year the Heavy would be used to launch two paying customers on a looping flight around the moon, but no details have been announced. As of this writing, only three missions are believed to be booked on the Heavy.

Complicating the outlook, SpaceX is designing a much more powerful "BFR" rocket (a euphemism for "big [expletive] rocket") that would dwarf the Heavy in payload capability. It is the rocket Musk plans to use for eventual flights to Mars.

"I don't understand what they're doing," Logsdon said. "Elon's out talking about they're not going to pursue the Falcon line of rockets, he's going to put all his efforts into the BFR. So, what is the future of Heavy?"

A knowledgeable rocket engineer who asked not to be named said the Heavy is too powerful for routine use launching Earth-orbiting satellites but not powerful enough to serve as a stand-alone lunar exploration rocket. He said it's generally agreed that meaningful missions to the moon or beyond will require rockets capable of boosting 130-metric-ton payloads into Earth orbit.

Some observers have speculated that the Heavy might be intended as a shot across NASA's bow, so to speak, while the agency is developing the more expensive, but more capable, Space Launch System rocket. They suspect Musk hopes to win government support to help fund the BFR at the expense of the SLS.

Logsdon said he believes it is "good for the country to have two alternative heavy lift vehicles, at least for a little while, to see which one works better." But he also believes the SLS enjoys enough solid congressional support to "sustain it for some few more years, anyway."