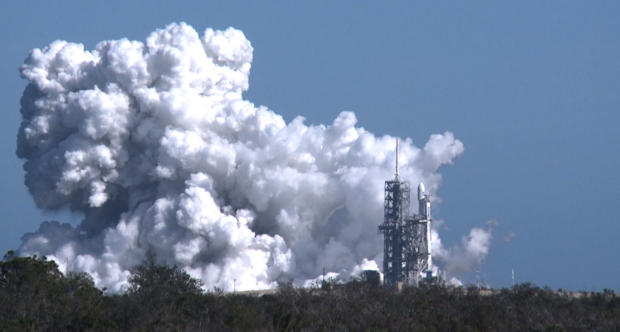 Firmly locked to its launch pad, a powerful SpaceX Falcon Heavy rocket, made up of three strapped-together Falcon 9 core stages and a single upper stage, fired its 27 core stage engines for more than 10 seconds Wednesday in a critical test to pave the way for the new booster's maiden flight. As usual with preflight test-firings, SpaceX did not announce the test, but observers could clearly see vapors venting from the giant rocket during fueling.

Engine ignition was impossible to miss as a huge cloud of churning exhaust shot away from historic pad 39A at the Kennedy Space Center at 12:30 p.m. EST (GMT-5).

The engines shut down as planned about 10 seconds, or slightly more, after ignition, and the towering exhaust cloud quickly dissipated in the afternoon breeze.

"Falcon Heavy hold-down firing this morning was good," SpaceX founder Elon Musk said in a tweet. "Generated quite a thunderhead of steam. Launching in a week or so."

The payload for the Heavy's first flight: Musk's personal Tesla Roadster, a cherry red sports car that will be mounted in the rocket's nose cone. It was not known if the car was aboard the Heavy for the engine test-firing, but Musk says he plans to launch the roadster on a looping orbit beyond Mars with David Bowie's "Space Oddity" playing on the stereo.

"I love the thought of a car drifting apparently endlessly through space and perhaps being discovered by an alien race millions of years in the future," Musk tweeted late last year.

The dramatic, highly anticipated test-firing came almost a month after SpaceX first hauled the huge rocket to pad 39A for initial tests and several weeks after a static firing was first expected.

SpaceX is the only major rocket company that test-fires main engines on the pad prior to launch as a confidence check to make sure the booster's systems are operating properly before committing a vehicle to flight. The static-fire, or hot-fire, test typically takes place a few days to a week before launch.

On Sept. 1, 2016, a Falcon 9 rocket on pad 40 at the nearby Cape Canaveral Air Force Station exploded in a spectacular fireball five minutes before a planned static firing, destroying a $200 million communications satellite and heavily damaging the pad. Since then, SpaceX has reeled off 19 successful flights -- and hot fires -- in a row, most recently launching a classified satellite known as Zuma.

The mysterious satellite was lost, according to Pentagon sources, possibly because it failed to separate from the Falcon 9's second stage. SpaceX did not build the satellite's attachment mechanism, and the company insists the rocket performed normally.

SpaceX currently is preparing a Falcon 9 for launch from the Air Force station to boost a communications station for satellite operator SES into orbit. That hot fire could come in the next few days, and usually only one such test is required before flight.

But in the case of the Falcon Heavy, which is making its first voyage, additional tests likely are planned before it is cleared for launch.

When it finally flies, the Heavy will be the world's most powerful operational rocket, generating more than 5 million pounds of thrust at liftoff from 27 Merlin engines -- nine per core vehicle.

SpaceX says on its website the Heavy can boost 119,000 pounds of payload to low-Earth orbit, the "equivalent to a 737 jetliner loaded with passengers, crew, luggage and fuel ... more than twice the payload of the next closest operational vehicle, the (United Launch Alliance) Delta 4 Heavy, at one-third the cost."

For its first flight, the Heavy's first stage is made up of two previously flown Falcon 9 boosters strapped to either side of a new center core stage. The outside core boosters will attempt landings back at the Cape Canaveral Air Force Station while the center stage is expected to land on an offshore drone ship on its initial flight.

The second stage, perched atop the central core stage, will carry the Tesla into space.

Musk has repeatedly downplayed expectations for the rocket's first flight, saying last year, "There's a lot of risk associated with Falcon Heavy, a real good chance that that vehicle does not make it to orbit."

"I want to make sure to set expectations accordingly. I hope it makes it far enough beyond the pad so that it does not cause pad damage. I would consider even that a win, to be honest."