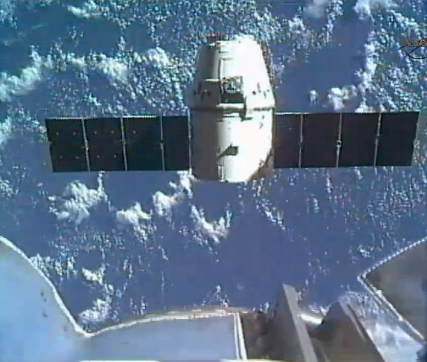 (CNET) In the final chapter of a history-making space drama, a commercial cargo ship completed a near-flawless test flight to the International Space Station with a splashdown off the Baja California peninsula Thursday, clearing the way for the start of routine cargo delivery missions later this year.

Leading the space station by about 200 miles, Dragon's retro rockets ignited at 10:51 a.m. EDT (GMT-4) and burned for a planned nine minutes 50 seconds, reducing the ship's 5-mile-per-second velocity by 224 mph, just enough to drop the far side of the orbit orbit into Earth's atmosphere over the Pacific Ocean. A few minutes after the rocket firing, the spacecraft's no-longer-needed trunk section, including the craft's solar panels, was jettisoned as planned.

After a half-hour free fall, the Dragon capsule, built and operated by Space Exploration Technologies -- SpaceX -- of Hawthorne, Calif., plunged back into the discernible atmosphere at an altitude of about 75 miles, using a state-of-the-art PICA-X heat shield to protect the craft from the extreme heat of atmospheric friction.

Once through the peak heating zone, two stabilizing drogue parachutes deployed at an altitude of 45,000 feet, slowing the spacecraft and triggering the release of three main parachutes at an altitude of about 10,000 feet. The huge 116-foot-wide main chutes were designed to slow the capsule's descent to a sedate 10 to 12 mph.

Splashdown 560 miles off the Baja California peninsula came at 11:42 a.m., according to NASA's mission control commentator. A SpaceX recovery team made up of about 16 engineers, technicians and divers, along with contractors operating a 185-foot crane-equipped barge, a crew boat and two inflatables, was standing by to stabilize the capsule and haul it aboard later today for the long trip back to the Port of Long Beach.

After off loading environmental samples collected at the space station, the Dragon capsule will be shipped to SpaceX's McGregor, Texas, engine test facility for post-flight processing and the removal of nearly 1,400 pounds of equipment sent down from the space station.

"What this mission really does is it heralds the dawn of a new era of space exploration, one where there is a significant commercial space element," SpaceX founder Elon Musk said after the Dragon capsule arrived at the space station May 25.

"Just like the advent of the internet in the mid 90s when commercial companies entered the internet, which was originally a government endeavor, that dramatically accelerated the pace ... and made it accessible to the mass market. I think we're at a similar inflection point for space. I hope and I believe this mission will be historic in marking that turning point towards a rapid advancement in space transportation technology."

The Dragon capsule, making only its second test flight -- the first to the International Space Station -- was launched atop a SpaceX Falcon 9 rocket on May 22 from the Cape Canaveral Air Force Station. The solar powered spacecraft chalked up a near flawless performance and three days later, the capsule maneuvered to within about 30 feet of the space station, turned off its thrusters and stood by while Pettit, operating the lab's robot arm, locked on and pulled it in for berthing.

SpaceX and NASA originally planned three test flights before beginning routine space station resupply missions under a $1.6 billion contract calling for at least 12 missions. After the initial 2010 test flight, the first time a commercial entity had successfully recovered a spacecraft from orbit, SpaceX lobbied to combine the objectives of the second and third planned test flights into a single mission.

The capsule carried a relatively light load of low-priority supplies and equipment for the test flight and the astronauts off-loaded the bulk of the 1,100 pounds of gear in a single day. That left re-entry and splashdown as the final objectives of the mission.

With the space station's Canadian-built robot arm locked onto the Dragon cargo craft early Thursday, four gangs of motorized bolts holding the capsule in place were driven out, releasing the spacecraft from Harmony's Earth-facing port at 4:07 a.m.

Flight engineer Joseph Acaba, operating the robot arm from a computer work station inside the lab's multi-window cupola compartment, pulled the Dragon capsule away, moving it to a pre-determined release point well away from station structure.

Within 11 minutes or so, the capsule was outside a pre-defined safety zone around the space safety zone and SpaceX assumed full responsibility for the remainder of the mission.

"The departure sequence is fairly quick, it's a three-burn series, two small burns then one big burn," said NASA Flight Director Holly Ridings. "The Dragon will head away from the space station outside the integrated space and that'll be the end of our integrated activity with the SpaceX/Dragon team. That process is 10 or 11 minutes after the release time."

"So again, very quick, very different from rendezvous day when we spent a lot of time in integrated space. The Dragon will head on out and be on its own in terms of the Dragon team controlling and managing the rest of the activities through the day."

The Dragon vehicle is the only space station cargo craft designed to return to Earth, giving NASA the ability to send home experiment samples and hardware for the first time since the space shuttle's retirement last year. During routine resupply missions, SpaceX plans to get high-priority items off the craft within 48 hours of splashdown with the remainder going to NASA within 14 days.

For the test flight, environmental samples will be turned over to NASA in the Port of Los Angeles in a run through of the early access protocols. The remainder of the return cargo will be off-loaded in McGregor and turned over to NASA.