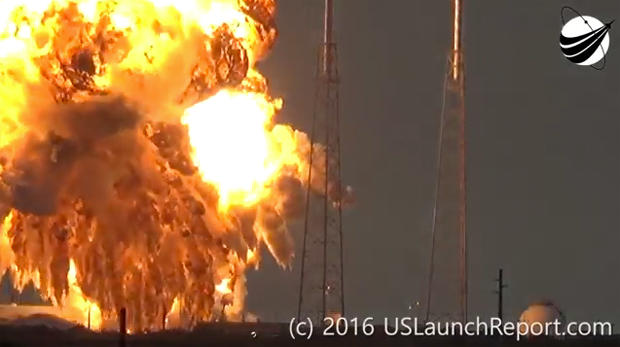 The spectacular on-pad explosion of a SpaceX Falcon 9 rocket during a pre-launch test Sept. 1 was triggered by a sudden catastrophic breach in a helium pressurization system inside the booster’s second-stage liquid oxygen tank, the company said Friday.

While no details were provided, the company said a data review and “fault tree” analysis showed the unspecified problem was not related to the internal strut failure that released a second stage helium pressurization bottle during a June 28, 2015, launch. The buoyant helium bottle shot to the top of the oxygen tank, causing the second stage to break apart, destroying the rocket and a space station-bound cargo ship.

While the second stage helium system was involved in the Sept. 1 explosion, a different failure mode apparently was involved.

“At this stage of the investigation, preliminary review of the data and debris suggests that a large breach in the cryogenic helium system of the second stage liquid oxygen tank took place,” SpaceX said in a statement.

“All plausible causes are being tracked in an extensive fault tree and carefully investigated. Through the fault tree and data review process, we have exonerated any connection with last year’s ... mishap.”

SpaceX was readying the Falcon 9 for launch Sept. 3 to boost an Israeli communications satellite into orbit. In a routine pre-launch test, the rocket was mounted on the launch pad and loaded with super-cooled liquid oxygen and kerosene propellants for a planned first-stage main engine test firing on Sept. 1.

SpaceX test fires the nine Merlin 1D engines for several seconds before every launch to make sure propulsion and other critical launch systems are operating properly before committing a booster to flight. As always, the launch complex was evacuated before the test.

The engine firing was planned for 9:15 a.m. EDT (GMT-4). But at 9:07 a.m., the second stage exploded, triggering a spectacular conflagration that destroyed the $62 million rocket and its $195 million satellite payload in a huge fireball of burning propellant. No one was injured.

SpaceX said Friday an Accident Investigation Team, made up of company engineers,and representatives of the FAA, NASA and the Air Force, is “currently scouring through approximately 3,000 channels of engineering data along with video, audio and imagery.”

“The timeline of the event is extremely short,” SpaceX said. “From first signs of an anomaly to loss of data is about 93 milliseconds or less than 1/10th of a second. The majority of debris from the incident has been recovered, photographed, labeled and catalogued, and is now in a hangar for inspection and use during the investigation.”

In its first update on the status of launch complex 40, SpaceX confirmed “substantial areas of the pad systems were affected.”

But the company’s Falcon Support Building near the pad suffered no major damage and new liquid oxygen tanks and plumbing, along with nearly RP-1 kerosene storage tanks were “largely unaffected. The pad’s control systems are also in relatively good condition,” the company said.

SpaceX facilities at launch complex 39A at the nearby Kennedy Space Center were unaffected and no debris was found outside the LC-40 area.

In the meantime, SpaceX engineers are continuing to build rockets and subsystems at the company’s Hawthorne, Calif, factory “in a methodical manner, with teams continuing to build engines, tanks, and other systems as they are exonerated from the investigation.”

“We will work to resume our manifest as quickly as responsible once the cause of the anomaly has been identified by the Accident Investigation Team,” the company said. “Pending the results of the investigation, we anticipate returning to flight as early as the November timeframe.”

​How often are scientific studies retracted?

"No doubt" Russians are behind latest Facebook meddling, Morell says