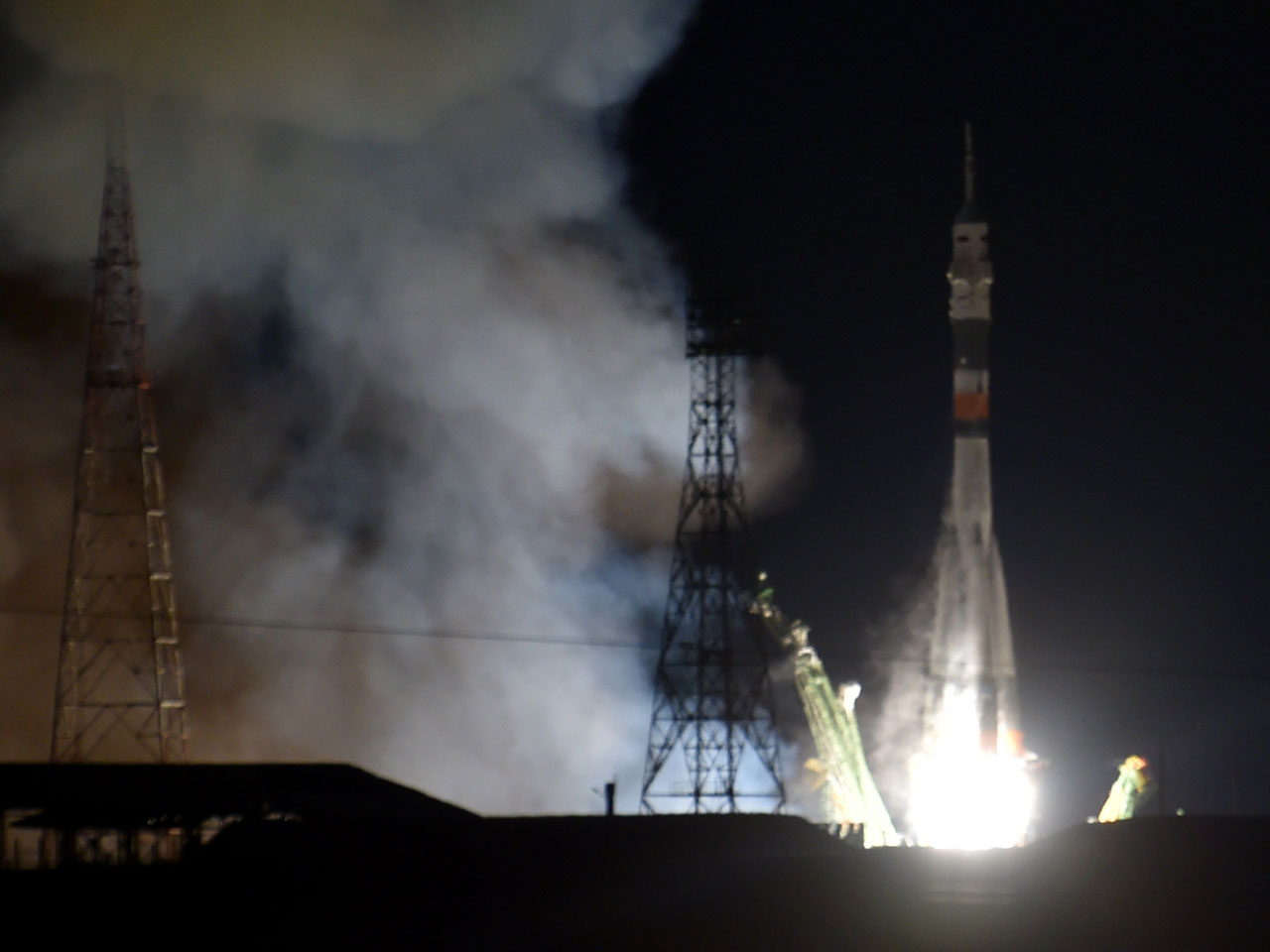 Five hours and 47 minutes after a sky-lighting launch from Kazakhstan, a Russian Soyuz ferry craft carrying a crew of three representing Russia, the United States and Italy, glided to a smooth docking at the International Space Station late Sunday, boosting the lab's crew back to six and setting the stage for a busy winter of research and spacewalk assembly work.

As the two spacecraft sailed 260 miles above the Pacific Ocean approaching the coast of South America, Soyuz TMA-15M commander Anton Shkaplerov, flanked on the left by European Space Agency flight engineer Samantha Cristoforetti and on the right by NASA astronaut Terry Virts, monitored an autonomous approach to the Earth-facing Rassvet module, moving in for docking at 9:48 p.m. EST.

Floating in the Zvezda command module a few moments later, the newly arrived crew took part in a traditional videoconference with mission managers, family and friends standing by at the launch site, smiling broadly and clearly enjoying the moment as they shared a meal prepared by Wilmore.

"Mr. Butch cooked us some lunch," Virts told his son. "We're having a lot of fun. Me, Sam and Anton are all having a great time. Everything goes good with tortillas!"

Cristoforetti, a fan of Douglas Adams' "Hitchhiker's Guide to the Galaxy," was asked by a friend, "What is the meaning of life, the universe and everything?"

Launching almost directly into the plane of the station's orbit, the Soyuz TMA-15M spacecraft lifted off from complex 31 at the Baikonur Cosmodrome in Kazakhstan at 4:01 p.m. -- 3:01 a.m. Monday local time.

Trailing a brilliant plume of fiery exhaust, the Soyuz booster quickly climbed away from launch complex 31, knifing through low clouds and disappearing from view as the crackling roar of its first- and second-stage engines thundered across the sprawling space center.

Live television from inside the TMA-15M command module showed Shkaplerov, strapped into the center seat, calmly monitoring cockpit displays and providing status reports to flight controllers. All three crew members appeared relaxed in the cramped cockpit, tightly strapped into their custom-contour seats as the booster accelerated toward orbit.

The space station passed over Baikonur a few moments before liftoff and Wilmore reported he was able to see the Soyuz as it climbed out of the clouds more than 500 miles behind and below the lab complex.

The rocket's four oxygen-kerosene powered strap on-boosters shut down and fell away about two minutes after liftoff, followed three minutes later by shutdown of the second stage core booster. The third stage engine then ignited, the second stage fell away and the Soyuz continued the climb to orbit.

Eight minutes and 45 seconds after liftoff, the Soyuz TMA-15M spacecraft separated from the upper stage, its two solar panels and navigation antennas unfolded and the crew began working through a carefully choreographed series of rocket firings to catch up with the space station.

With the arrival of the TMA-15M crew, the focus of station operations will shift back to a full slate of research activity and preparations for a series of spacewalks next year to prepare the lab for dockings by new commercial crew ferry craft now under development in the United States.

"The mission we'll be doing on the space station is going to be very busy," Virts said before launch. "We're going to be primarily focused on maintaining the station safely, keeping it running and leaving it a better place than when we (arrived).

"But of course, the mission of the space station is science, and we have a very aggressive science program, roughly 170 U.S.-based experiments, NASA and U.S. companies and private educational institutions, and over 70 other international experiments. So there's a lot of science we'll be doing."

In addition, Virts and Wilmore plan to carry out three spacewalks in late January and early February to help prepare the station for the installation later in the year of two docking adapters that will enble the new commercial spacecraft to link up with the lab complex.

During two spacewalks, or EVAs, Virts and Wilmore plan to install cables to route power and data to the docking ports. During the third excursion, they plan to install communications gear needed by approaching crew ships and carry out maintenance on the station's robot arm.

"The main task for the first spacewalks that are scheduled will be to get the station ready to receive capsules," Virts said. "Our task on Expedition 42 ... will be to lay the wiring down, the cables on the outside of the station that will allow the docking ring to work for the capsules. Getting the docking system going is a big part of our spacewalks."

As for the robot arm and its critical internal grapple system, "It's getting a little sticky" after a decade in orbit, Virts said, "so we're going to have to go out and put some grease on it."

Along with research and spacewalk preparations, Virts said he was especially looking forward to spending time in the multi-window cupola compartment his shuttle crew helped install in 2010.

"Looking at Earth is the most powerful drug you can imagine," Virts said. "You just can't get enough of it, and that's kind of all you want to do. Not only Earth, but also looking out into space. I'm sure I'll be spending my time looking at everything. And there are so many amazing things to see, thunderstorms in the Amazon and central Africa, you just can't get enough of that, especially at dawn, because then you can see both the clouds and the lightning."

Shkaplerov agreed, saying "Everyone knows being an astronaut is a dangerous profession, but it is definitely very interesting, it is so worth it. Everything becomes worth it once you're able to see the Earth from the window of the space station."

A veteran fighter pilot and a captain in the Italian air force, Cristoforetti holds a master's degree in mechanical engineering, has expertise in aerospace propulsion technology and more than 500 hours flying time in a variety of military aircraft. But going into space is "the fulfillment of a dream I've had since I was a child," she said.

"I think what's most fascinating is the experience as a whole," she said. "This whole experience of, in just a few years, turning from somebody who was very passionate about space and tried to read about space and had a lot of knowledge as an enthusiast, and then turning that person into somebody who's actually ready to fly to space, to live and work in space ... hopefully I'll be able to do that."

Asked about the significance of being the first Italian woman to fly in space, Cristoforetti said it was just the luck of the draw and that she did not attach any special significance to her selection.

"I have done nothing special to be the first Italian woman to fly into space, I just wanted to fly to space and I just happened to be the first," she said. "If I had done everything the same, if I had worked as hard, and if I had had the chance of becoming an astronaut, and if I had been the second, to me it would have been the same.

"I understand this may well have significance for people who see this, and it can be an inspiration for women in Italy and Europe. And obviously, I'm very happy about that."