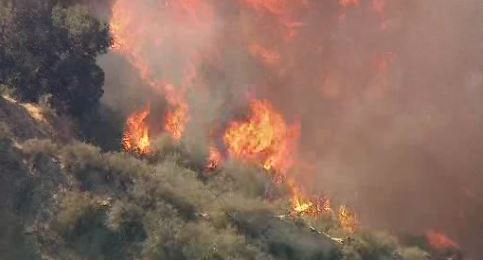 The Los Angeles County Fire Department says the blaze broke out in the foothill community of Stevenson Ranch Saturday afternoon near Interstate 5 and Calgrove Boulevard.

Dubbed the Sage Fire, it quickly chewed through 800 acres of dense, dry brush amid high temperatures and winds gusting up to 25 mph. By 8 p.m., it was 15 percent contained.

More than 200 firefighters aided by water-dropping aircraft focused on creating a perimeter around homes that were threatened. Aerial photos showed the flames came to the property line of a ridgetop home that was covered in fire retardant.

About 700 homes were evacuated. No structures were damaged as of late Saturday.

Captain Roland Strewell of the Los Angeles County Fire Department said "the fire is creating its own climate," as crews battled warm winds in the canyons, CBS Los Angeles reported.